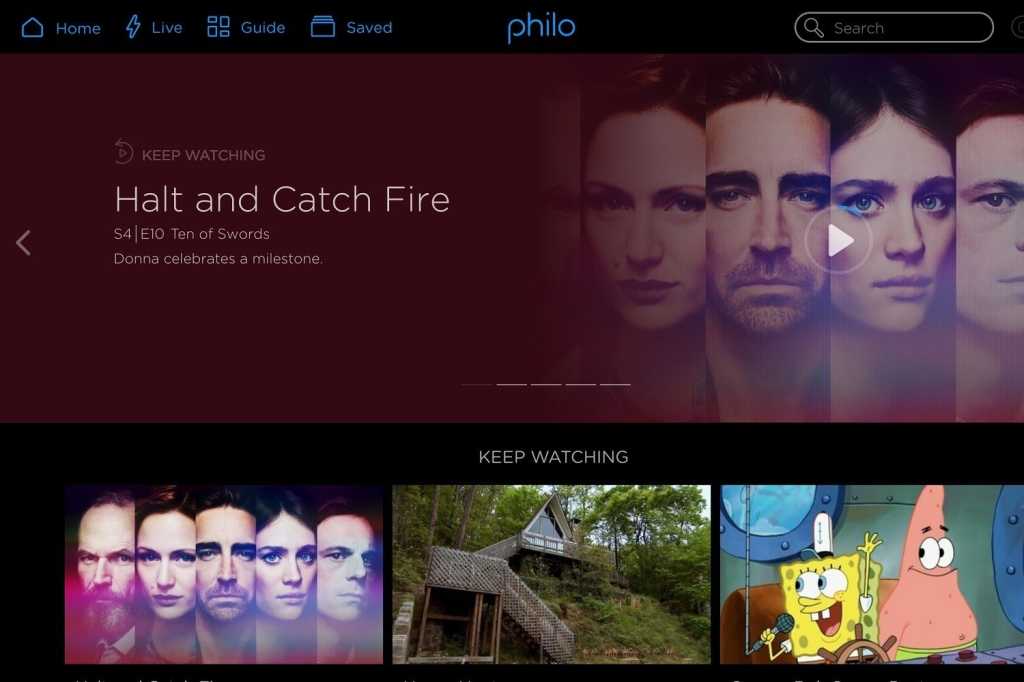 Philo, a new streaming bundle that launches today, provides hard evidence of how far your TV budget can go without sports.

For $16 per month, Philo provides 35 cable channels from AMC, A&E, Discovery, Scripps, and Viacom, along with the cable channel AXS TV and the digital-only channel Cheddar. Another nine channels are available for $4 per month more. Philo is the least-expensive streaming TV bundle to date, with only Sling TV’s $20 per month Orange package coming close. Other bundles, including YouTube TV, PlayStation Vue, and DirecTV Now, start in the $35- to $40-per-month range.

The big trade-off is that Philo doesn’t include any networks that broadcast sports on any of their channels. So while there’s plenty of non-sports content on channels like ABC, CBS, NBC, and Fox, Philo doesn’t offer any of those channels. (Check the bottom of this story for the full Philo channel list.)

“It’s mainly to try to offer a much better value to the consumer,” Philo CEO Andrew McCollum says of the decision to leave out networks that carry sports. “There are a lot of people who aren’t really interested in live sports, and right now there’s not really an option out there for you to get a package of entertainment content without paying a huge premium for that sports content.”

Why this matters: Despite the missing pieces, Philo could be a compelling option for cord cutters, especially those who can still get broadcast shows through an antenna, or don’t mind tacking on another streaming service that includes network shows, such as Hulu or CBS All Access. We’ll be reviewing Philo’s performance and features shortly, but for now, the price looks right.

If you’ve tried any other streaming bundles, you probably know the drill here: Beyond just live channel feeds, Philo offers an assortment of on-demand videos from each network, and most channels let you watch anything that’s aired in the past three days. (It looks like Viacom channels don’t support this, with the exception of Nick Jr., and some individual programs may not support replay either.)

Philo also offers a cloud DVR at no extra charge. Recordings have a shelf life of 30 days from the original air date, but there are no limits on storage space or simultaneous recordings.

During an interview, Philo also demonstrated some interesting (and optional) social networking features that will arrive in early 2018. By importing a friends list from Facebook, users can see what their friends are watching, share favorite shows, and even sync up a video to watch at the same time as a friend.

“We’ve turned this on internally, and at first I was definitely like, ‘Oh my gosh, I don’t want people to see what I’m watching,’” says Mike Keyserling, Philo’s head of content acquisition and distribution partnerships. “But then it so quickly turns on this cool thing, where you’re almost always going to talk to somebody about it if you’ve seen that they’ve watched it.”

For now, Philo is available on Roku players, iOS devices, and the web (including Android devices via the Chrome browser). A proper Android app is coming soon, and the plan is to support more TV devices over time as well.

As for additional content sources, McCollum says Philo is in negotiations with other streaming-only channels, similar to Cheddar. He also doesn’t completely rule out the idea of Philo offering sports in the future. But the high cost of carrying those channels and the complications that arise with sports programming—such as blackouts and location restrictions—mean it’s unlikely to happen any time soon.

“If there was a way for us to bring sports to the platform, in a way that we felt made sense to the consumer from a value perspective, and gave the flexibility that people want, and also didn’t create these negative experiences around the product when you actually go to watch that stuff, we would be open to try and figure out a way to do that,” McCollum says. “But for now we’re really happy with the package that we’ve created.”

Correction: This story was updated on November 15 to report the correct price for the base package.