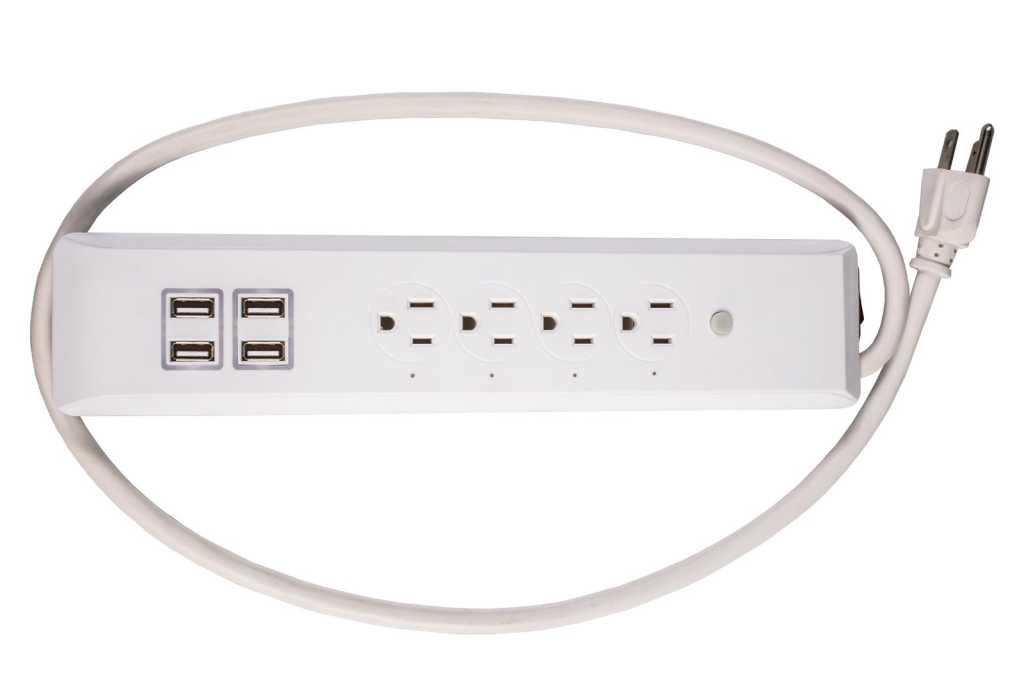 Geeni
At a Glance

What could be a strong product needs more documentation, more robust software, and more disclosure about its surge-protection capabilities.

While there are many, many smart plugs on the market—outlets that you can control via a smartphone app—there are only a handful of power strips that offer app-based individual outlet control. The Geeni Surge sports four surge-controlled outlets, each of which are app switchable, and it has a four-port USB charger that can also be switched on and off as a set. Its smarthome app has easy controls for manually switching outlets on and off, and, because the device relies on Wi-Fi, it can be used outside your network to control switches when you’re away.

The Surge doesn’t squeeze its AC outlets or USB ports together, making it easy to fit in a full complement of plugs. It also has its AC outlets rotated perpendicular to its length, which works better with some power bricks, although the space doesn’t accommodate typical sized ones.

A nice, bright blue LED appears above each AC outlet and the USB port section. Turning AC outlets on and off similarly turns that LED on and off. However, the USB outlet’s light on the model I tested remains illuminated even when its power is cut.

So far, so good. Unfortunately, the Surge has several issues that limit my recommendation only to use it for manual switching through the app. I can’t recommend it as a surge protector given a lack of detail and visual cues about its protection, even if it’s perfectly adequate.

Documentation for the device, while not expected to be extensive, is incomplete, poorly written, and mostly addresses troubleshooting and setup. Information about the Scenes feature on the app’s main screen and the Alarm option for the outlet’s configuration is absent. Scenes is only useful if you have sensors or other devices that can trigger turning a switch on and off, but that’s only clear when you try to configure it. When I tried to set up a scene, only the first outlet was available for use, too, with no explanation.

The Alarm feature doesn’t set alarms at all, but rather works like those vacation timers for lights that have you place pegs in for switching power on and off. The Alarm lets you add times for a switch or the USB ports to turn on or off, and that’s it. Timers can be set for one or more days of the week on a repeating schedule or as a one-time action.

The Surge also falls down in providing detailed information about its actual surge protection, which is noted as a non-standard 460 joules. Typical surge protectors indicate the clamping (or cut-off) voltage on each of the power legs (live, ground, and neutral), and whether power halts when protection is exhausted or continues on each leg or all legs. Geeni offers none of these details on the product or its packaging, in its manual, or on its website. You should be able to know what happens when a surge disables internal protections.

It also lacks a “protected” or similar LED found on most dumb surge protectors, which indicates the surge protection remains active. It’s possible the blue power button, which doubles as a Wi-Fi status indicator, will provide some indication, but there’s no documentation.

The Surge’s manual app-based controls work as expected, but because it falls down in so many other areas, we don’t recommend it. You can read our other surge protector reviews by following this link.