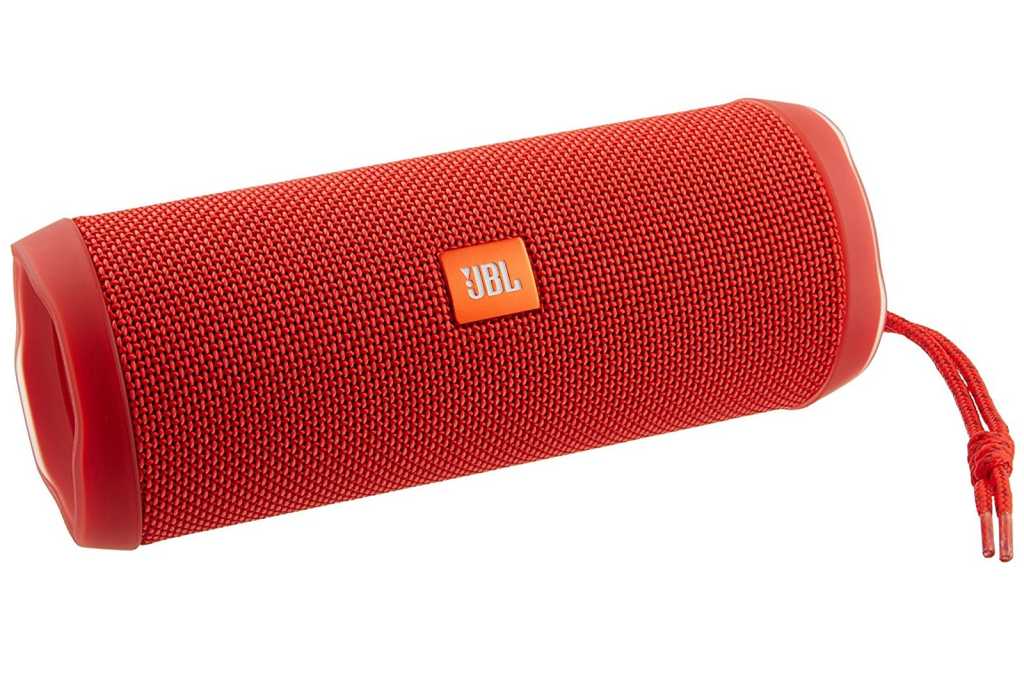 This $100 speaker sounds like it should cost a lot more.

There’s nothing quite like feeling as though you got more than what you paid for. That’s how you’ll feel if you drop a C-note on JBL’s Flip 4 Bluetooth speaker. Small, easy tote, and waterproof to the point of being submersible, this speaker sounds like it’s considerably bigger and much more expensive.

It can easily fill a large bedroom with sound, and it can also hold its own outside. But the Flip 4 is more than just loud. It delivers a quality of sound that you wouldn’t expect for its size or price tag, despite being outfitted with just two 40mm full-range drivers and an 8-watt-per-channel amplifier.

A pair of 1.5-inch passive radiators on each end certainly help by serving up copious amounts of bass response, but never out of proportion to the mid-range and higher frequencies. I found that the Flip 4 delivered terrific dynamic range with all types of music, from acoustic jazz to hard rock.

The cylindrical speaker measures 6.9 inches wide and 2.7 inches in diameter and has thick rubber end caps at each end, with a 1.5-inch strip of rubber running across its back. Lay it horizontally, and the speaker almost automatically rolls into a position where that strip holds the drivers pointed slightly up and toward your ears. I thought the speaker sounded best oriented that way, but if it takes up too much space, you can stand it on end. Those sloped end caps will also angle the speaker up.

The speaker’s power button and a JBL Connect+ button (more on that in a bit) are located on that rubber strip, along with a 5-element LED to indicate current the battery level. A thick rubber plug protects water and dirt from getting into the 1/8-inch headphone jack and USB charging port. Raised rubber buttons for volume up/down, play/pause, and Bluetooth pairing are to the left side of the strip, where your fingertips can easily find them. No buttons are provided for moving up and down your playlist.

The Flip 4’s shape and size makes it easy to pick up and carry around, and there’s a convenient lanyard should you want to hang the speaker on a hook, tree branch, or your backpack (although it will be vertically oriented in those scenarios). An open-weave cloth grill covers the rest of the speaker, but JBL nonetheless rates the speakers weatherproofing as IPX7. That means there is no stated protection from dust ingress, but that the speaker can be submerged in up three feet of water for up to 30 minutes without suffering damage.

The Flip 4 has a built-in microphone, so you can use it as a speakerphone. The mic can also be used to summon Google Assistant from an Android phone or Siri from an iPhone. JBL says the Flip 4’s 3000mAh battery should deliver 12 hours of music after a 3.5-hour charge, a claim I didn’t verify. JBL provides a three-foot ribbon cable for this purpose, but you’ll need to provide your own AC adapter.

JBL offers an app—JBL Connect, available for Android and iOS—but you won’t really need it unless you intend to take advantage of some of the Flip 4’s special features.

The app lets you reconfigure the Flip 4’s play/pause button to instead summon your phone’s digital assistant, for instance. If you have two identical JBL Bluetooth speakers, you can configure one as the left channel and the other as the right. Finally, the JBL Connect+ button I mentioned earlier puts the speaker into party mode: Now you can connect as many as 100 other JBL Bluetooth speakers and stream music to all of them from the same device.

I thoroughly enjoyed listening to the Flip 4. It’s a great value for the money.