At this price, you won’t be disappointed by the JBL E55BT’s sound or its feature set.

JBL’s E-Series headphones are designed to bring the company’s signature sound in a range of headphone models with a focus on style. At the top of the E-series lineup sits the E55BT wireless headphones. If you’re looking to grab some signature JBL sound for less than $150, these headphones might just be your ticket.

Like all E-Series models, the E55BT comes in five bold monochromatic options: black, blue, red, teal, and white (my review pair happened to be red).  Included accessories are Spartan. There’s a 3.5mm audio cable and a microUSB charging cable, but no carrying case or even a 1/4-inch adapter.

The JBL E55BT is a circumaural, or over-the-ear, design. The headband is wrapped in a soft, two-tone cotton mesh, with the underside of the headband a darker color than the top. Sizing is adjustable in typical click-stop increments. I had no problems getting a good, snug fit.

The E55BT’s ear pads are small compared to some other circumaural designs. My ears touched the sides when I wore them, and I would suspect that it would be the same with most adults. While the headphones were never uncomfortable, I raise the issue because some folks tend to be more sensitive to this issue than others.

When I first picked them up, I noted how light E55BT are. That must be due, in part, to the all-plastic ear cups. Even though my review pair emerged unscathed, the all-plastic shell did give me the impression that these headphones might crack if dropped onto a hard surface or subjected to a fair amount of abuse. 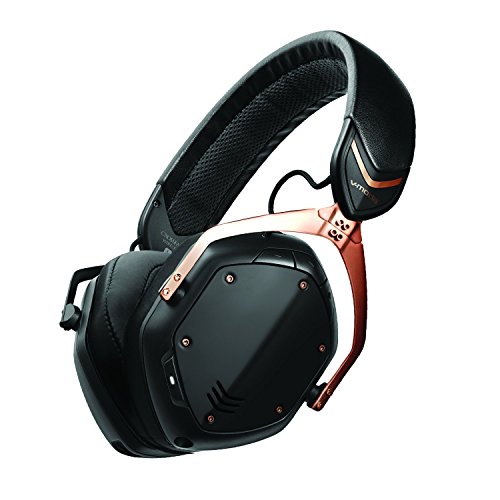 When you put them on, you tend to forget you’re wearing headphones. Their light weight makes them great for toting along just about anywhere. But their folding options take portability even further.

You can fold these JBLs in two different ways—something that’s highly unusual in an over-the-ear headphone. You can twist the ear cups flat to slide them into a backpack or sleeve; or, like the V-Moda Crossfade 2 Wireless, you can fold the E55BT ear cups fully into the headband for an ultra-portable form factor.

The E55BT’s ear pads themselves are made of a synthetic leather. It’s soft but with extended listening, they will get warm.

The ear cups’ inner side tell you which one is left or right. The outside are boldly branded with the JBL logo, while the rounded sides house traditional controls. The bottom of the left ear cup has a MicroUSB charging input. JBL says you can get up to 20 hours of playing time.

The right ear cup has a power switch, 3.5mm input, microphone, inline remote controls, and a Bluetooth pairing button. You can use the included 3.5mm cable if you want to use the headphones passively. There’s no lightning cable for iPhone 7 models, so you’ll need to use a lightning-to-3.5mm adapter.

The remote controls are basic volume up, play/pause, and volume down.  Pressing and holding the volume up or volume down will advance or rewind a song. I found this functionality to be awkward; if I didn’t hold the button down long enough, all I’d do is adjust the volume.

To me, the ear cup-situated controls felt a bit cheap. From a design perspective, I wish that there was better tactile distinction between the three control buttons. Even though the play/pause button is slightly elevated to give you a point of reference, I never had complete confidence I was pressing the correct button; and on a few occasions, I raised or lowered the volume when I simply wanted to pause a song.

Bluetooth pairing is simple and flawless. The only thing to note is that the E55BT does not support either the aptX or aptX HD codec. So, when streaming via Bluetooth, you should expect less-than CD quality.

A selling feature of the JBL E55BT is its ability to be paired with multiple Bluetooth devices. When you turn on the E55BT it will auto-pair with previously-paired Bluetooth devices in range.

While that isn’t necessarily unique, I did find that switching between Bluetooth devices was lightning fast and pretty much flawless. For example, I was able to pair the JBL E55BT with a MacBook Pro and iPhone 7 simultaneously. Choosing songs from the iPhone immediately played them on the JBL. If I paused the iPhone’s audio and played media from the Mac, the audio from the Mac would then play through the JBLs without issue.

You need not worry about one device trouncing another. If, for example, I was watching a video on the Mac and then started playing music on the iPhone with the JBL paired to both, I’d only get the audio of the Mac—even though the iPhone continued playing while paired with the E55BT.  Once I quit the application on the Mac, the iPhone audio would then kick right in exactly as I’d expect. Not only was this feature flawless in my testing, but the E55BT also responded relatively quickly when auto-switching between sources.

The sound is all JBL

I’ve reviewed quite a number of JBL headphones and speakers, and the E55BT tends towards some acoustic hallmarks of JBL’s other consumer-oriented products. To give you a hint, when you turn on the E55BT. they generate the same characteristic chords as JBL’s other Bluetooth speakers.

The E55BT’s often sound like the have a euphonic bump in the upper bass that adds a bit of extra oomph to your music.  It works very well with many songs, including Adele’s “Send My Love (To Your New Lover)” from 25.

Unlike some other headphones I’ve reviewed, the bump is smartly implemented and doesn’t extend across all bass frequencies to muddy up the overall musical presentation.  For example, many headphones I’ve reviewed will get sloppy with Alanis Morissette’s “Woman Down” from Havoc and Bright Lights. Not the B55BT’s. I also fired up Sarah McLachlan’s “Perfect Girl” from Afterglow Live, and the deep synthesizer bass lines never rumbled out of control. At the same time, the E55BT’s weren’t capable of reproducing tight, visceral bass the way more expensive headphones can. If you consider yourself a bass-head or like headphones that over-emphasize bass, then the E55BTs won’t be your cup of tea.

I lived with and listened to the V-Moda Crossfade 2 Wireless on an almost daily basis for months to prep for that review. So, when I switched to the JBL E55BT for this review, some of the E55BT’s contrasting sonic characteristics immediately jumped out.

The soundstage is larger and more relaxed on the E55BT. Consequently, you get a greater sense of space. I loved this characteristic on live albums, like the Eagles’ Hell Freezes Over and on choral works like Lycourgos Angelopoulos and the Greek Byzantine Choir’s recording of the Byzantine Liturgy of St. John Chrysostom. Vocals also tend to sit further back in the soundstage and take a back seat to bass-dominant instruments, which are more forward. I didn’t notice this on every track I played, but that track-dependent characteristic will likely pop up from time to time.

The E55BT aren’t the last word in transparency or rendering fine sonic details at the top end but I don’t think the average consumer will really mind. The headphones deliver a very clean, well-balanced sound.

Lately, I’ve reviewed several headphones costing double or triple the JBL’s price. To say that these modestly priced JBL headphones surprised me would be an understatement. With their ultra-compact form factor (for a circumaural headphone) and light weight, they are a perfect travel companion. The only downer is that you’ll need to provide a carrying case or some other protection, so the all-plastic ear cups don’t get damaged.

With excellent wireless performance and battery life and really good sound, JBL’s E55BT headphones are a real winner. If you tend to like the sound of JBL’s other products then I think you’ll love the E55BT’s. In fact, regardless of your listening preferences, if you’re auditioning headphones under $200, you’d be silly not to include the E55BTs on your short list.