In designing its new Safelight, SnapPower made four significant improvements to its concept of embedding a nightlight into an outlet cover.

SnapPower makes ingenious replacement switch and outlet covers, adding features such as LED nightlights and USB chargers. We’ve given high marks to some of its previous products, but offered one suggestion for improving them: Provide retention washers so the screws don’t fall out while you’re installing them. SnapPower included that change and made three much bigger ones with its new Safelight.

Like the Guidelight, the Safelight replaces your existing outlet cover with one that has an LED light strip on the bottom. A light sensor automatically turns the LEDs on when the ambient light is dim. So what improvements did SnapPower make? First and foremost, the two outlets have spring-loaded sliding covers to prevent curious toddlers from sticking objects into them. When you need to use either of the outlets, you simply insert the plug partway and then slide the cover to the right to expose the outlet and push the plug in. 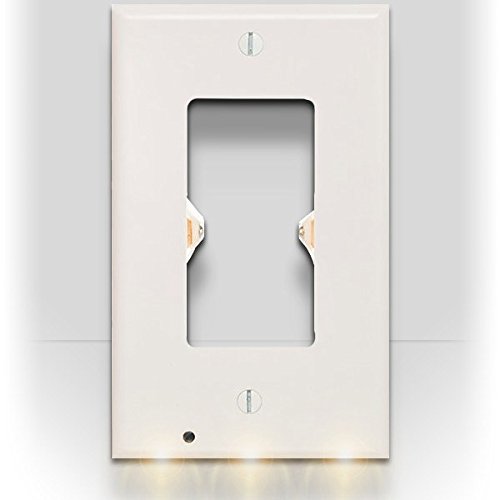 The second improvement is in the light itself. Where the original Guidelight has three LEDs that cast three distinct beams of light toward the floor, the Safelight has six LEDs mounted behind a diffuser that casts a more evenly distributed pool of light. SnapPower also added a switch to the plate that has three settings: High, low, and off. The last setting prevents the light from turning on no matter how dark the ambient light might be and is great for people who are particularly sensitive about lights being on while they’re sleeping. You can rely on the path lighting when you need it and turn the light off when you don’t. The final improvement is that the mounting screw no longer falls out of the cover while you’re trying to install it.

Installation is relatively quick and easy: Remove the existing outlet cover and slide the Guidelight’s arms into the now-exposed junction box, so that they establish contact with the screw terminals on the receptacle. SnapPower suggests turning the power off at your circuit-breaker panel first, which is a good but not completely necessary precaution. That’s because you’ll expose hot electrical wiring when you take that cover off.

I didn’t take that precaution and managed to install the Safelight without shocking myself, but I’m not advising anyone to follow my lead. I had my home built about 10 years ago, so all my switches and receptacles are wired through the back. Nonetheless, I found that the screw terminals on the right-hand side of the particular receptacle I decided to mount the Safelight to were sticking out too far to allow the arms to fit into the box. I very carefully pulled the receptacle out of the box and tightened these down with an insulated screwdriver.

SnapPower’s instruction manual recommends pushing the new cover straight into the box, but I found it easier to insert the left arm first and then push the right arm down with the screwdriver to get it to fit inside the box. I also discovered one of the drawbacks to covering the cover plate’s holes with those sliding covers: It’s difficult to line the cover up because you can’t see the receptacle’s holes. I had to hold the plate with my left hand and pull the shutter open with my right thumbnail so I could see how to line things up.

The fact that I was installing a Decorá-style plate made things a little more difficult, because those have two screws instead of one. Installation takes a little patience, but at least you don’t need to worry about the screws falling out. There’s certainly no reason to call an electrician.

SnapPower assesses a $2 premium for the $17 Safelight compared to the $15 Guidelight, which seems very reasonable given all its extra features, especially if you have little ones in your house.