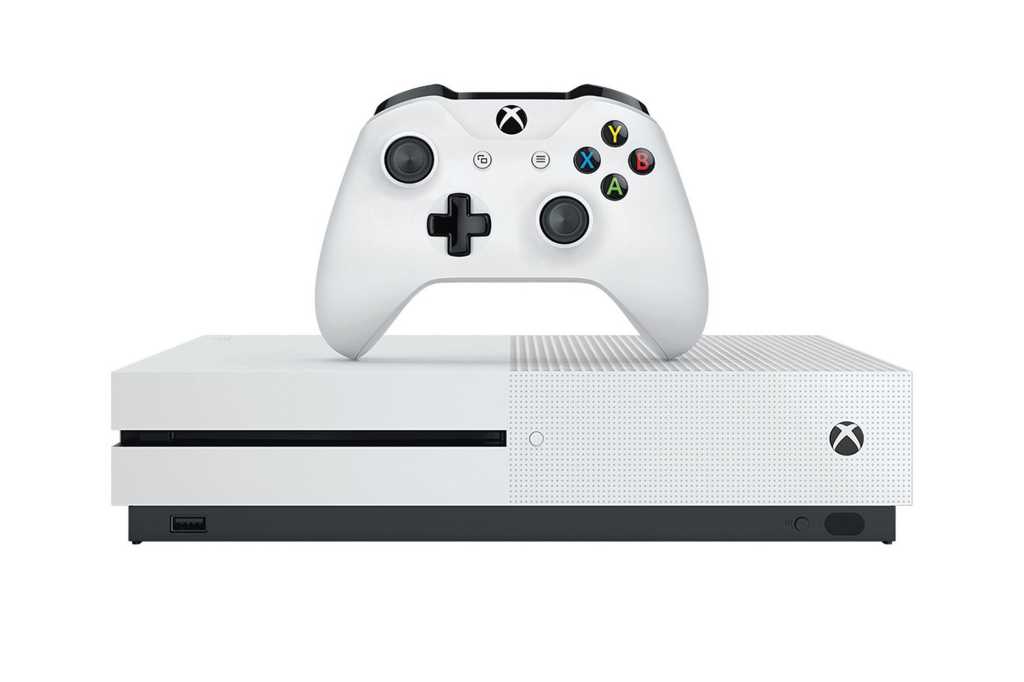 Image: Microsoft
At a Glance

This is a great Ultra HD Blu-ray player, especially for gamers.

This review doesn’t touch the gaming side of the Xbox One S. If that’s what interests you, this review discusses some of that. We used use the same 2TB model for this evaluation, but the less-expensive 500GB model will do just as well if you plan to use the machine as an Ultra HD Blu-ray player, media renderer, and 4K video streamer.

Updates that enable the Xbox One S to send Ultra HD Blu-ray’s high-definition audio bitstreams (Dolby TrueHD, DTS HD Master Audio, and Dolby Atmos) over HDMI to higher-end A/V receivers render it an incredible bargain, especially if you also enjoy playing video games. You’ll have to jump through a few hoops–including installing Microsoft’s Blu-ray player app–and you’ll need to figure out how to use the Xbox One controller to play Blu-ray discs (this support article on Microsoft’s help site tells you how), but those are one-time obstacles.

If you don’t want to deal with that, and you’re not interested in playing games, a conventional Ultra HD Blu-ray player, such as the Samsung UBD-K8500 or the out-of-this-world Oppo UDP-205 would be better choices..

Microsoft provides an HDMI input on the console, so you can connect your cable or satellite set-top box to the console and pass audio and video from the set-top box through to the Xbox One S. The box also has an infrared output for an IR Blaster, an optical S/PDIF out, a USB 3.0 port in front (it can support a keyboard, but not a mouse), a Bluetooth radio, ethernet, and an onboard 802.11ac Wi-Fi adapter.

Microsoft’s game console was a tad slower to mount Ultra HD Blu-ray discs compared to the purpose-built players we’ve tested, but it played every commercial and test disc we tried without a hitch. Like the competition, the Xbox One S also does a good job of upscaling 720p and 1080p, but you’ll never mistake the results for 4K UHD. The competition is no better. Don’t believe anyone’s advertising hype on that score. We did prefer the colors in the Xbox One S’s video output over the two dedicated players. The Xbox One S’s colors looked warmer, for lack of a better word.

In our opinion, the Xbox interface is a bit too PC-like for a living-room entertainment device, not to mention its constant attempts to sell you stuff. But after some mild initial puzzlement, newbies will work things out. And once you’ve grown accustomed to the Xbox controller and its two-handed approach, you’ll find you can move about very quickly.

You’ll need an app for that

You’ll need to download the apps required to play Ultra HD Blu-ray discs and media stored on external USB drives. Once installed, the Blu-ray app worked great, but the media player was only so-so.

There was one random “unable to play disc” error, but a quick cleaning of the disc seemed to solve that (they were probably our fingerprints anyway). On all of the approximately 50 other attempts, discs played fine though an occasional re-insert was required if the disc was in the unit when it booted.

During the first viewing session, there were a few minor motion artifacts, but after two firmware updates, those seemed to disappear. Put succinctly, the Xbox One S is a very good Ultra Blu-ray player—for most people.

Things were a bit dicier when playing content stored on a USB drive using Microsoft’s media player app. The good news is strong support for audio and image codecs. The Xbox One S can play FLAC, Apple and Windows lossless. MP3, WMA, and Apple M4V, as well as WAV files up to 7.1 channels and 96kHz/24-bit sampling rates/resolution. In addition to the usual support for bitmap, JPEG, and PNG images, there’s also GIF support and—get this—support for both uncompressed and compressed TIFF files. That’s old-school.

The bad news is that while the Xbox One S’s Media Player understands MKV containers and plays MPEG-1, MPEG-2, and MPEG-4 files; AVI, and most h.264 video files very well, support for the majority of the 4K UHD files in HEVC (h.265) format that we use for testing was missing in action. Oddly, a 24-frames-per-second HEVC video would play, but not the 30- or 60fps versions.

Even worse, when we tried to play a file Media Player didn’t support, file listings would disappear. Only a system restart would allow testing to continue. That got old very quickly, especially as the Xbox One S is pretty slow to start up. Hopefully, this will be fixed in the near future.

Is this the Ultra HD Blu-ray player for you?

You’ll find a host of apps and services at the Xbox store, including ones for all the big video-streaming players such as Netflix, Amazon, Hulu, and YouTube. Games? Come on, this is an Xbox. The Samsung and Panasonic have a couple of titles at most, but they’re nothing like what you can get on Microsoft’s gaming console.

The Xbox One S isn’t a perfect UHD Blu-ray player at the moment, but it played every disc I threw at it. And when you tire of watching movies, TV shows, and other video content, you can play first-rate games. It’s a heck of an entertainment value.

This article was updated to report on the Xbox One S’s ability to stream high-definition audio bitstreams over HDMI. We also increased the review score from 3.5 to 4.