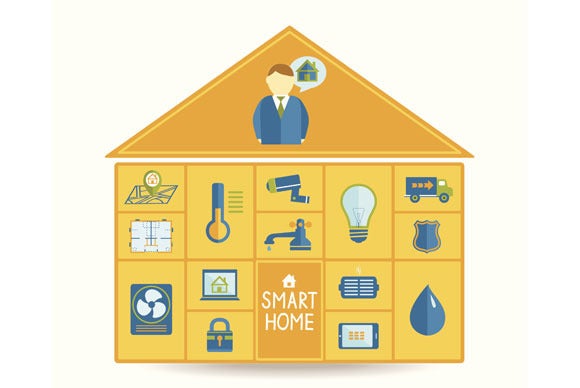 Sigma Designs, the integrated circuit manufacturer that owns Z-Wave smart-home technology, announced today that it has released the interoperability layer of its Z-Wave technology to the public domain.The company had previously donated its Z-Wave radio standard to the International Telecommunication Union (ITU), which adopted it as the public G.9959 radio standard.

Not familiar with Z-Wave? The technology was developed by the Danish company Zensys and it first came to market way back in in 2005 (Sigma Designs acquired Zensys in 2008). Today, there are more than 1500 certified Z-Wave products on the market, according to Sigma Designs.

There have been a few stumbles along the way—I’ve been using Z-Wave products in my own home since 2007 and have encountered a handful of compatibility issues with early hardware—but Sigma Designs’ Z-Wave Business Unit VP Raoul Wijgergangs told me in an embargoed interview last week that those issues were put to bed with the 2013 introduction of Z-Wave Plus. I have more than 50 Z-Wave nodes in my home, none of which are Z-Wave Plus, and the vast majority of those nodes work together just fine. I chalk up the issues to the trade-off for being a very early adopter.

According to Wijgergangs, “Z-Wave is the most widely deployed smart-home technology out there. There is nothing that comes even close to it in the smart-home space. [Sigma has achieved] market share in the smart-home segment of the IoT [Internet of Things] space of around 60- to 70 percent. 375 companies are building products for the smart home—the [entry] locks, the lights, the thermostats, sensors, and so forth. All of these products speak to each other with a single language that is created by the interoperability layer of the Z-Wave software. And that interoperability layer is what we are now opening up to the public.”

Wijgergangs said making this software public will “democratize the smart-home application area for the IoT, so other companies can look at it, see how strong it is, companies or developers or developer communities can build derivative works off it, like plug-ins that translate Amazon web services to Z-Wave ecosystem devices in homes, or AllJoyn, or bridges for gateways to Z-Wave. That’s where we believe we will spark a lot of innovation.”

Sigma Designs is also releasing the specifications for the APIs that internet gateways use to communicate with Z-Wave devices in the home: Z/IP (Z-Wave over Internet Protocol) and Z-Ware (Z-Wave middleware). The company is also releasing the full specification for its Z-Wave S2 security framework, to allow “security experts to view the inner workings of Z-Wave S2 security to further validate or provide critical feedback for improvements.”

Why this matters: In an ideal world, you wouldn’t need to worry about which communications standard your smart-home or IoT devices rely on, everything would just work together right out of the box. That’s essentially the way it works with the rest of your home network, whether you’re using Wi-Fi, power-line, or MoCA, right?

But we don’t live in a perfect world, and when it comes to the IoT devices that are essential to building out a smart home, the market is a balkanized mess of competing and incompatible standards. In addition to Z-Wave, there’s Thread (based largely on technology from Google’s Nest Labs), ZigBee (an IEEE standard favored by Philips), AllJoyn (developed Qualcomm, but then passed on to the Linux Foundation), the Open Interconnection Consortium (backed by Intel), and Apple is just getting started with its HomeKit initiative. And then there’s Bluetooth Low Energy (a variant of the same technology used for wireless headphones). But as popular as Bluetooth is, the technology that would enable you to control Bluetooth devices over the internet is still in its infancy.

Sigma Designs’ decision to release the interoperability layer of its Z-Wave technology to the public domain is smart given that AllJoyn and the Open Interconnection Consortium have previously announced plans to pool their resources, and that the Thread Group and the ZigBee Alliance have forged a similar partnership. Putting this technology in the public domain won’t settle the IoT standards wars overnight, but it could shape the product-design decisions companies are making today.

While hobbyists will be free to do whatever they wish with the Z-Wave standard, any developer or manufacturer who desires to have their commercial products labeled as Z-Wave Certified will need to join the Z-Wave Alliance and submit their products for testing.