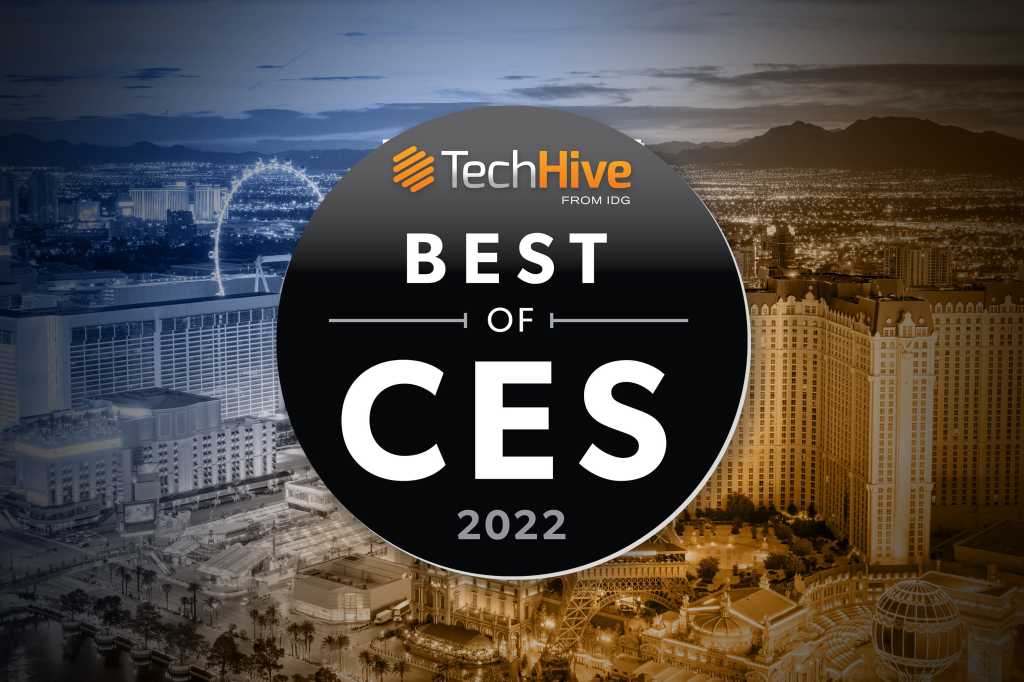 CES was officially an in-person event this year, but with the highly transmissible omicron variant of COVID spreading like wildfire, we opted to cover the show from afar. Fortunately, vendors were once again prepared to showcase their offerings via teleconference, as they did for last year’s virtual show. These are the smart home and home entertainment products that captured our attention

Our list of winners is presented below, in alphabetical order.

Abode makes a couple of our favorite DIY home security systems, and it looks like they’re about to get even better with the addition of the company’s first smart doorbell. And the price tag is even better news: The Abode Wireless Video Doorbell will be priced at just $89 when it ships in April. The device is battery powered and entirely wireless, and it will capture a view of your front porch in 2K resolution—with person detection. Its IP65 weatherization should ensure years of trouble-free operation, even if you spray it with your garden hose. You don’t need to have a broader Abode system to benefit from this smart home device, but you’ll want one of Abode’s subscription plans to record motion-detected events; otherwise, you’ll only see a live view.

Belkin’s latest noise-cancelling in-ear headphone packs features that both Apple and Android fans will appreciate. Arriving with 12mm dual-layer drivers and supporting Qualcomm’s aptX HD codec for 24-bit audio via Bluetooth, the Soundform Immerse boasts Belkin’s Hybrid Active Noise Cancellation tech, which uses a combination of feedforward and feedback processing to cut down on background noise, while the Belkin app lets you customize your EQ curve. Even better, these IPX5-rated headphones work with Apple’s Find My network, perfect for tracking down a lost charging case, while Android users will love the Google Fast Pairing support.

Cambridge Audio knocked our socks off with its maiden effort at building a high-end turntable, the Alva TT. The company announced a second-generation of that model at CES, but we were even more excited to hear about its less-expensive sibling, the belt-driven Alva ST. It’s still an expensive product at $999, but that’s half the price of the fancier offering, and its specs left us drooling: It’s a Bluetooth turntable that supports the aptX HD codec, so you can stream 24-bit/48kHz audio to Bluetooth speakers or headphones. It comes with a diecast aluminum platter and an Audio Technica AT-VM95e moving magnet cartridge. It’s outfitted with a phono stage for wired connections to an amplifier, receiver, or self-powered speakers. The phono stage is switchable, so you can bypass it if you’d prefer to use an outboard preamp. You should be able to buy one this spring. We can’t wait to check it out.

The Eve Outdoor Cam is more than just an outdoor security camera, it’s also one of the most attractively designed floodlights we’ve seen. Eve’s product line emphasizes privacy, and to that end, this camera supports Apple’s HomeKit ecosystem, including HomeKit Secure Video. When the Eve Outdoor Cam detects motion, it will record 1080p video at 24 frames per second and encode it as an h.264 file. If you have an Apple TV or HomePod on your network, one of those devices will process the video to determine if the motion was caused by a person, animal, or vehicle, and it will also inform you if a package has been delivered. The video will be encrypted and uploaded to your iCloud account, where you alone will be able to access it. The $250 security camera/floodlight combo is expected to ship in April.

When it comes to DIY smart home hubs, there are surprisingly few choices, so we’re excited to see Athom’s Homey Bridge coming to the U.S. (it’s already available in Europe). The inexpensive Homey Bridge ($69) supports all the smart home infrastructure your could ask for—Zigbee, Z-Wave Plus, Wi-Fi, Bluetooth LE, infrared, and a 433MHz radio—and Athom says its system is compatible with 50,000 smart devices from more than 1,000 third-party manufacturers. Athom’s promise of total privacy is equally exciting. The company says its users’ personal data will never be sold or used for profiling, advertising, or marketing. Look for our in-depth, hands-on review in the coming weeks.

Labrador Systems designed the Retriever household robot to make it easier for people with mobility issues or chronic pain to remain in their homes. Like an extra pair of hands, this ingenious mobile appliance can do everything from tote a load of laundry—it can carry up 25 pounds—to retrieving a snack tray from a specially designed mini-fridge. An internal scissor jack can raise its top shelf to counter height, and it comes with a removable tablet stand and a USB port for charging mobile devices. A sophisticated navigation system will use augmented reality algorithms to build a 3D map of the owner’s home, and in the online demo we saw, the sophisticated machine was able to make very tight returns around entrances, corners, and furniture. While it can’t climb stairs, it can manage any ADA-compliant transition, according to its inventors. The best part is that the Retriever’s price tag won’t make you cringe: $1,500 plus a month fee ranging from $99 to $149 per month for 36 months.

For audiophiles, the 50-year-old Mark Levinson brand is as synonymous with audio quality as it is luxury. The brand’s first headphone—the Mark Levinson No 5909—is certainly no exception. These noise-cancelling Bluetooth cans feature 40mm Beryllium-coated drivers and active noise cancellation. They’re battery-powered and support the AAC, aptX Adaptive, and LDAC codecs for high-resolution streaming and meet the performance standards of the Japan Audio Society’s Hi-Res Audio specification. A bold design with an anodized aluminum frame and ear cups available in metallic red, gray, or black. The headband and replaceable ear cushions are fashioned from supple leather, and the headphone comes with a hard-shell carry case to protect them. The price? A cool $999.

Moen wowed us in 2021 with its voice- and gesture-controlled smart faucet. For 2022, the fixture manufacturer decided voice commands and gestures are all you really need. The Moen Smart Faucet with Motion Control doesn’t have a handle at all. Not only can you turn the faucet on with a wave of your hand, you can even control the temperature of the water flowing from it. This new product is part of Moen’s “Smart Water Network,” which includes the Flo smart shut-off valve and leak detectors as well as a smart sump pump for basements. If your hands are full, or if you just don’t want to wave your arms around the kitchen, the faucet can also be controlled with Alexa and Google Assistant voice commands. The sophisticated handle-free faucet is expected to ship later this year with prices starting at $675.

Meet a robot vacuum/mop hybrid that takes self-sufficiency to a whole new level. The S7 MaxV Ultra comes with suction power of 5100pa (double that of the older S7+, a TechHive Editors’ Choice winner) along with an RGB camera, 3D-structured light, and a neural processing unit for navigation, and it can adjust its cleaning pattern and suction power based on the flooring material in each room. In mopping mode, the S7 MaxV Ultra uses sonic waves to scrub hard surfaces, while also lifting its mop to avoid rugs and carpets. Best of all is the (admittedly massive) dock, which can store 7 weeks of dust as well as clean the robot’s mop pads and underside.

We’ve seen our share of portable video projectors over the years, but few that boast the “wow” factor of Samsung’s new Freestyle. Weighing less than two pounds and capable of casting a 1080p image as large as 100 diagonal inches, the Freestyle comes with a 180-degree “cradle” stand along with auto keystone and auto focus features that keep the image both square and sharp. Under the hood, the Freestyle has a 360-degree audio driver with a passive radiator for bass, plus a built-in Samsung Smart TV interface and an “ambient” mode that turns the projector into a mood light. Not bad, but check this out: In addition to USB-C power, the $899 Freestyle can (with help from an optional base accessory) draw juice from a standard light socket, allowing you to turn any room into a theater by screwing the projector into a desk lamp or a wall sconce.

Sleep-monitoring wristbands and smart displays are nothing new, but light bulbs that can track your sleep? You heard that right. Sengled announced at CES that it’s in the “very early” development stages of a Wi-Fi/Bluetooth-mesh smart bulb that’s capable of monitoring your sleeping habits, as well as tracking “select” biometrics including heart rate and body temperature. When used in a group of two or more, the A19 smart bulbs can even create a “virtual map” of the room that can sense when an occupant has fallen and needs help. Pretty wild, but don’t hold your breath—Sengled’s “health-monitoring” bulb isn’t due until the end of 2022, at the earliest.

Sony’s high-end OLED smart TVs have delivered the best audio performance for several years running, thanks to a whiz-bang design that uses the TV’s own panel as a speaker. Now the company is delivering the next big thing in display technology with an OLED panel that uses quantum dots to eliminate the need for a white subpixel to boost brightness. This technology will debut in the Sony Master Series A95, which will have a true RGB palette throughout its luminance range. The TV will also come with Sony’s Bravia Cam, which will enable the TV to optimizes its image and sound by tracking the number of viewers in the room and where they’re located. The camera will even automatically power the TV off if it notices no one is in the room watching it.

If you’ve been pining for Vizio’s driver-swiveling P-Series Elevate soundbar but balked at the $1,000 price tag, the manufacturer just unveiled a more affordable version with a nifty twist on the Elevate’s signature feature. A CES Innovations award winner for 2022, the 5.1.2-channel M-Series Elevate ($699) takes the left and right drivers that visibly rotated on the 5.1.4-channel P-Series model and hides them in a redesigned chassis, with left and right port tubes peeking out only when the drivers are swiveled up for Dolby Atmos and DTS:X height cues. When rotated in forward position, the drivers bolster standard 5.1 and stereo content. If you really want to put on a show, the port tubes on the M-Series Elevate have LED accents that can shine in multiple colors.