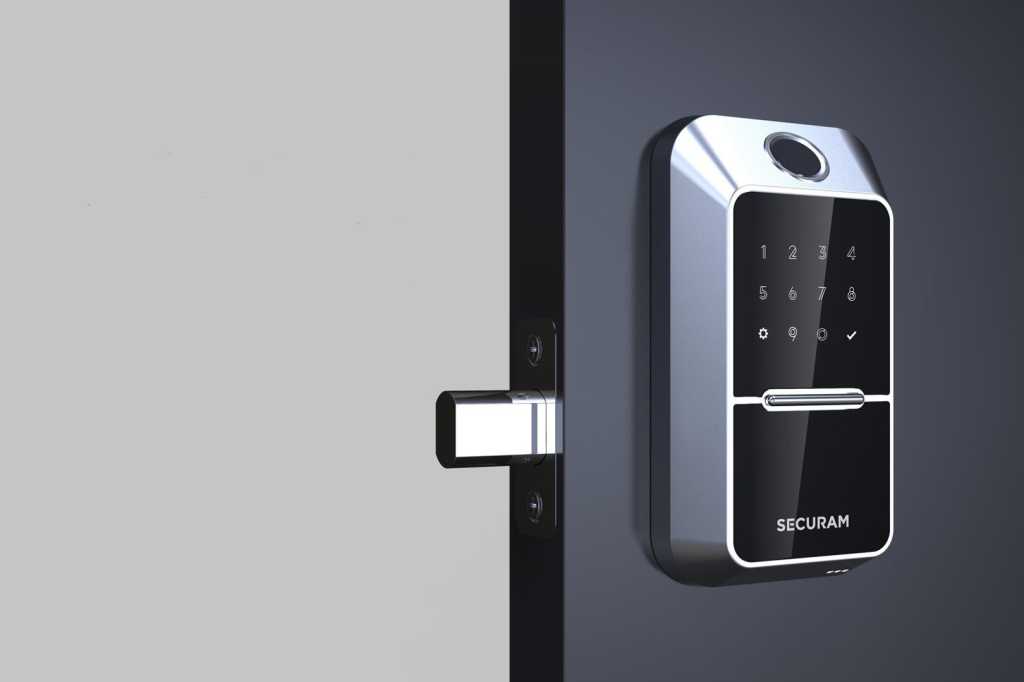 Image: Securam
At a Glance

Connectivity drops are a big problem with this otherwise innovative and solid smart lock.

Way back in March 2020 we brought you a review of the Securam Touch, from a company best known—at the time—for making locks for safes. The Touch was capable enough for a first product from a company entering the smart home space, though it came with a couple of major drawbacks, including an unpolished app and, especially, no Wi-Fi support. The all-new Securam EOS remedies both those issues. It’s still not a perfect smart lock, but it is at least a somewhat improved (and cheaper) one.

Let’s start with the hardware. The old hockey puck design of the Touch is out, a new rectangular design is in. It’s still a bit industrial looking, and homeowners with a more classic design sensibility might find this lock to be a bit out of place. The exterior escutcheon features a thumbprint reader up top, with a surprisingly small numeric touchpad underneath. (These numbers may be tough to press accurately if you have big hands; the good news is that you probably won’t need them, as the fingerprint reader is top notch.)

Beneath the keypad, a flip-out cover conceals a physical keyhole and a 9-volt battery backup terminal. There’s also an interesting (and optional) door sensor feature, courtesy of a pair of small arms that extend from the interior escutcheon to align with the edge of your door; it’s a much cleverer and simpler design than the typical dangling-from-a-wire door sensor that you find on many smart locks. The unit is available with either a black or silver finish, though both are quite stark in appearance.

Securam includes only minimal printed documentation. To install the lock, you’ll need the SecuramGuard app. This replaces the old one, called Securam APAC. The new app includes a helpful installation guide, featuring mercifully brief and useful video clips. I was able to get the lock installed within minutes, but I soon found that the lock gave me an error whenever I tried to lock the door, saying that the deadbolt would not fully extend (even though the deadbolt was fully extended).

It took a call to tech support to discover that I had inserted the tailpiece sideways, a problem that could easily be remedied with a tiny tweak to the design of the deadbolt mechanism or the addition of a calibration option in the app. In any case, after disassembling the lock and putting it back together, everything worked fine from a hardware perspective.

Again, the biggest change here is that in addition to Bluetooth, Wi-Fi (2.4GHz only) is now built into the lock instead of requiring a separate plug-in bridge, though this likely comes at the expense of battery life: four AAs will provide 6 to 8 months of running time, per the company. The Wi-Fi experience was immediately a bit rocky: It took me three tries to get the lock to register with the SecuramGuard app, after which I was finally able to start interacting with it through my phone. If you Wi-Fi network goes down, you’ll need to use the lock’s keypad, fingerprint reader, or a physical key to unlock the door.

From a use perspective, the SecuramGuard app is an improvement over its predecessor, though it still has plenty of room for additional improvement, starting with its overly aggressive requirement that you sign in every time you launch the app, a real hassle that can’t be dialed down at all. The app offers basic access to lock/unlock features and a log of all activity, plus auto-lock options, the option to turn the door sensor on or off, and volume settings for the lock’s onboard speaker (although even on high, it’s a bit too quiet for my taste). Alexa and Google Assistant are both supported, and the app can be used to disable the ability to use voice commands to open the lock, as this can be a security risk if someone is able to, for example, yell through a window for Alexa to unlock the door.

One strange negative: The system supports only nine users, which can be a range of administrators, residents, or visitors. The first two user types must download the SecuramGuard app to gain access, but visitors can be set up directly, including limited access time. At least they can in theory; I was never able to get visitor access to work without receiving a “communication error,” though other types of access configuration worked fine.

These kinds of errors were constant during my testing and were easily the biggest problem I had with the lock, although none of the disconnect issues were as wholly impassable as the user-creation error. Sometimes, the app wouldn’t work at all to control the lock for hours at a time. At other times, problems would linger for just a few seconds. Either way, it’s a big issue when dealing with a smart lock: Nobody wants to be locked outside because their app isn’t connecting properly.

The good news is that many users may not really need the app at all after initial configuration, as fingerprint and touchscreen access work very well. And, at just $169 at present, it’s a solid deal and much cheaper than its predecessor, which runs $328 with the Wi-Fi bridge. That said, Securam really needs to take aim at its connectivity problems if it wants to compete with the more robust smart locks on the market.

Correction: This article was updated February 28 to correct our reporting that it has a Bluetooth radio onboard. It does not.