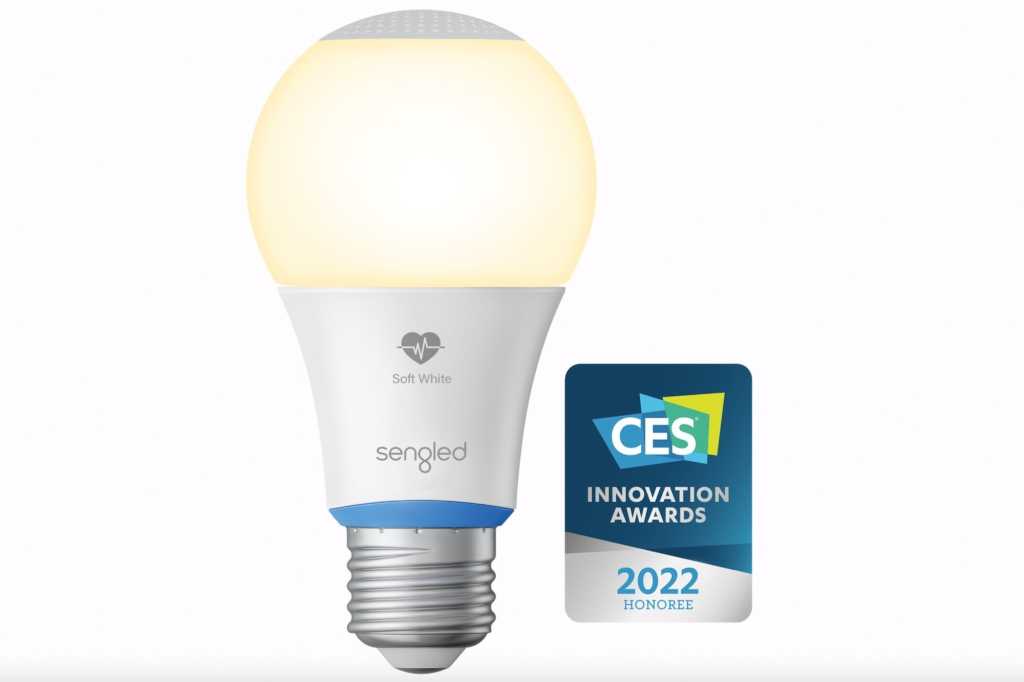 Smart home manufacturer Sengled says it’s working on a new Wi-Fi and Bluetooth mesh bulb that will be able to monitor your sleep, track your vitals, and even detect falls.

Sengled touted the upcoming A19 bulb at CES in Las Vegas this week, where it’s also showing off a new picture-synching TV light strip, smart string lights, a portable smart lamp, and a pair of new Zigbee smart sensors.

The “health-monitoring” bulb, which won a CES Innovation Award for 2022, is in the “very early” stages of development, according to a Sengled rep.

Equipped with a tiny radar, the dual-chip Wi-Fi and Bluetooth mesh bulb will offer sleep tracking along with “select” biometric measurement tracking, including heart rate, body temperature, and other vital signs.

When used with a second health-monitoring bulb, the two devices will be able to connect via Bluetooth mesh and create a “virtual map” of the room that can help determine whether an occupant has fallen and needs assistance.

Work on the bulb only began late last year, Sengled said, and it’s not expected to arrive before the fourth quarter of 2022.

Further along in the pipeline from Sengled is a new smart light strip for TVs that can sync with the picture on the screen with help from a small camera.

Suitable for TV screen sizes ranging from 45 to 75 inches, the Wi-Fi-enabled LED light strip will come with a dozen light segments, and it can glow in up to 16 million colors.

Set for release in the second quarter of the year for “around” $100, the light strip will be able to sync with your TV’s picture using a small camera that can be affixed to the top of the screen or positioned somewhere below the screen.

We’ve tested such camera-powered TV light strips before, and while they allow the light strip to sync with any images on your screen—meaning no worries about HDMI compatibility—they can also be less precise than TV light-syncing setups that connect directly to HDMI, such as the Philips Hue Play HDMI Sync Box.

Also slated for the second quarter are Sengled’s dual-chip Wi-Fi and Bluetooth-enabled string lights, which (similar to the TV lights strip) can glow in 16 million colors or “thousands” of white color temperatures.

Available in both 48- and 96-foot versions, the string lights can be controlled via Alexa or Google Assistant voice commands, and the color of each bulb can be controlled individually. The lights will also be able to sync with music using an integrated microphone or a smartphone mic.

The string lights themselves have an IP67 rating, which offers complete protection from dust ingress and immersion in up to one meter of water, while the electrical box will “likely” be suitable for “damp locations,” according to Sengled.

The 48-foot light string will arrive with a price tag in the $70-80 range, while the longer 96-inch string will cost “about double” the amount of the shorter string.

Another dual-chip Wi-Fi and Bluetooth smart light, Sengled’s upcoming portable lamp glows in millions of colors and boasts a rechargeable battery that should last up to 8 hours between charges.

As with the string lights, the portable light will have an integrated microphone that allows for music syncing, and it will also offer a variety of preset lighting scenes, including a one that mimics a candle flame. The lamp will also boast a wake-up routine.

Designed for indoor use, the light can be controlled via Bluetooth when it’s out of Wi-Fi range. When connected to Wi-Fi, the lamp works with Alexa and Google Assistant voice commands, or via the Sengled Home app.

Sengled says it’s “targeting” a $60-70 price range for the portable lamp, which should be available in the second quarter of 2022.

Sengled says it will bow a Wi-Fi LED essential oil diffuser light later this year with scheduling and timer functionality. The light will glow in color and white light, and it will offer high and low diffuser atomization rate control.

Also coming soon is a Zigbee motion sensor with a passive infrared sensor and adjustable sensitivity, while a second-generation Zigbee door and window sensor will arrive with an improved battery life of up to two years, Sengled says.

Finally, Sengled’s existing Bluetooth mesh lights will be adding Google Assistant support in the “next few months.” Up until now, the Bluetooth mesh bulbs only worked with Alexa.