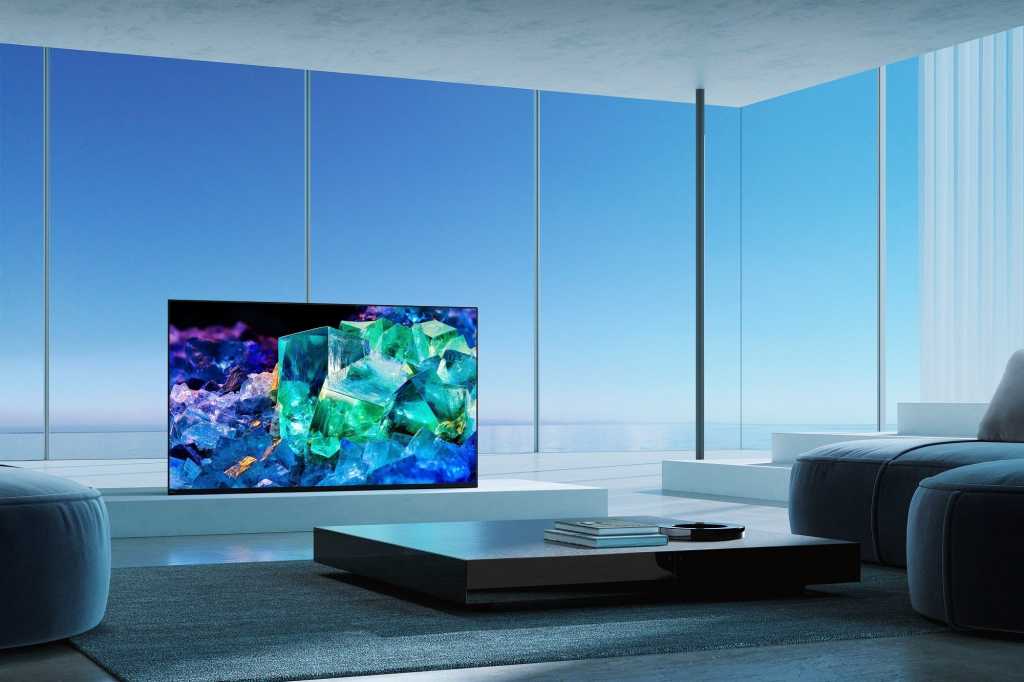 Quantum dot OLED is the latest technology to hit TVs, and Sony’s flagship OLED TVs will be among the first to showcase it under the monikers Bravia XR OLED and Triluminos Max. Pure RGB QD OLED promises brighter images and truer color throughout the luminance range than is offered by the current crop of RGB+W OLEDs.

The other big news from the company is the introduction of mini-LED backlighting in its new K series LCD TVs, and the Bravia Cam webcam, which will perform ambient sensing as well as facilitate video chat.

All current consumer OLEDs use a fourth white subpixel to augment the brightness of pixels whose red, green, and blue elements are challenged in the respect. This is known as RGBW, or RGB+W. The problem is that increasing brightness using white washes out colors.

The new QD OLED technology uses blue OLED emitters capped by quantum dots to create red and green, while passing through the blue light from the third OLED subpixel. Blue being far brighter than standard red and green OLED elements, this increases brightness without resorting to a white subpixel. The result is a true RGB palette throughout the luminance range, rather than one that goes pastel and then washes out as it gets brighter.

Sony has offered a pure-RGB mastering OLED monitor for years, and it was widely used by movie-industry professionals. It was only 24-inches, though, and prohibitively expensive for the average user. This new technology is far cheaper with far greater yields, rendering it practical for larger panels.

We’re looking forward to seeing just how well Sony handles the technology compared to TCL and other mini-LED backlighting earlybirds in a future review.

In a lack of progress that’s difficult to fathom, Sony’s new top-shelf 8K UHD Z9K still lacks the support for 8K playback from USB mass media or YouTube. This is a feature that every other 8K TV we’ve reviewed offers. Only signals input via HDMI (a relatively CPU-friendly task that requires no decoding) will be rendered in 8K UHD on this TV.

We wouldn’t harp on this if Sony promised a firmware or operating system update that would deliver it, but the company isn’t doing that. It’s a sizable shortcoming in our book, but we’re equally sure some consumers won’t care.

Sony talked up its new Bravia Cam camera that will initially support only video chat, but eventually allow optimization of the image and sound by tracking the location of viewers in the room. The latter abilities will arrive via a firmware upgrade.

Sony promises this is a local-only feature that doesn’t transmit information across the Web. We certainly hope so.

We’re anxious to see Sony’s new TVs. QD OLED and mini-LED are huge steps forward that amelioate most of our complaints about the company’s laggardly implementation of the latest technologies. Quantum dots for Sony LCD TVs anyone?