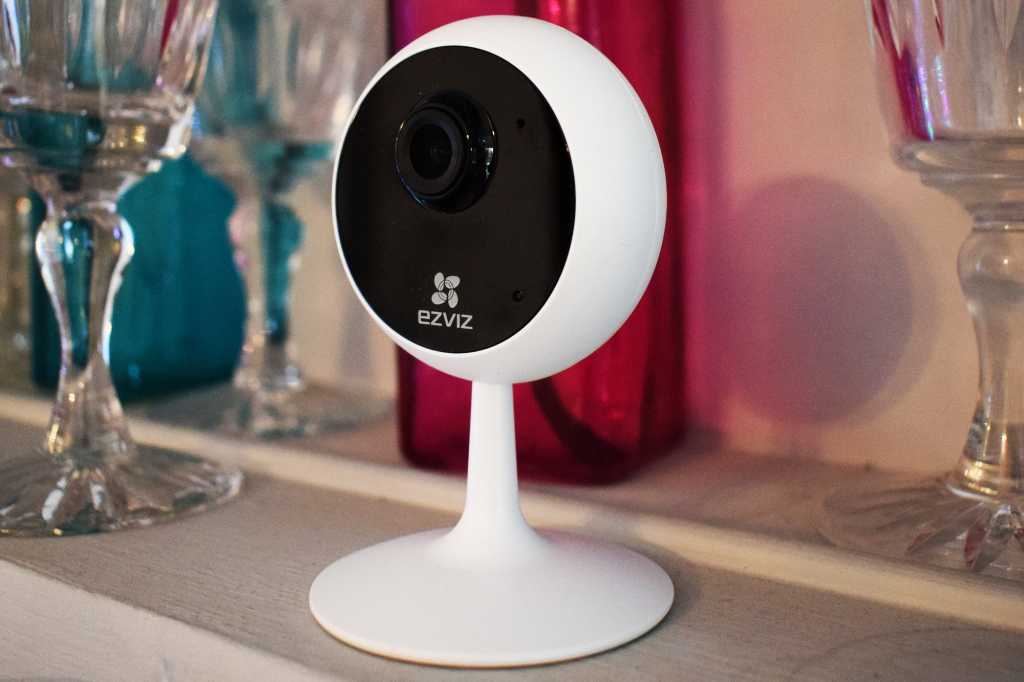 Another ultra-affordable security camera, though it’s only fit for indoor use.

Security cameras needn’t be pricy to be perfectly capable. With its C1C indoor camera, EZVIZ turns out a solid, flexible, and very affordable camera designed for indoor operations.

The teardrop-style design is a familiar one, featuring a small, rounded camera unit a simple pedestal-style base. A two-way hinge allows it to be aimed freely in any direction, though you’ll need to take care with the lengthy USB cable that provides power to the system. (No battery is included.) Mounting hardware (courtesy of a magnetic base) allows for a more permanent placement if desired.

The camera records 1080p video at 20 frames per second at maximum resolution. A 130-degree (diagonal) lens captures a wide-angle view, and traditional IR night vision is rated at a significant 40 feet of range. I was also impressed with video quality both during daylight and at night. Two-way audio is built in, also—though with an indoor-only camera that feature tends to be limited in value.

Setup is reasonably straightforward with the EZVIZ app, which has you scan a QR code printed on the base of the camera to begin the process of bridging the unit to your home Wi-Fi network (only 2.4GHz networks are supported). I encountered no setup trouble—and also no major issues with operations during regular use over the course of a week of testing. Motion detection was accurate and quick to pick up on both people and pets, both during day and night.

Recorded clips, up to a minute in length, are easy to flip through. These clips are presented as thumbnails, segmented by hour for each day of recording. As well, a fast-forward feature lets you see all the day’s clips in one super-cut, played back at roughly triple speed. I did encounter some minor buffering hiccups with clips or live video sometimes being slow to load, but it’s a convenient, intuitive, and effective way to find video snippets.

Those prices aren’t the cheapest on the market, but they aren’t outrageous—especially if you’re running a multi-camera setup (and why wouldn’t you, considering the cost of the hardware). Alexa and Google Assistant smart displays are also supported if you’d like to beam live video footage to another device.

The C1C is a solid enough camera—though it’s never overwhelmingly dazzling or surprising—but it’s biggest and best feature is its price tag. At just $25 each, the C1C is almost competitive with the Wyze Cam v3, though it can’t readily be used outdoors and is missing a few minor features, like a siren and color night vision. On the other hand, EZVIZ has stronger IR night vision and has fewer time restraints on recording if you don’t pay for the subscription. At these prices, to be honest, you can’t really go wrong with either option.