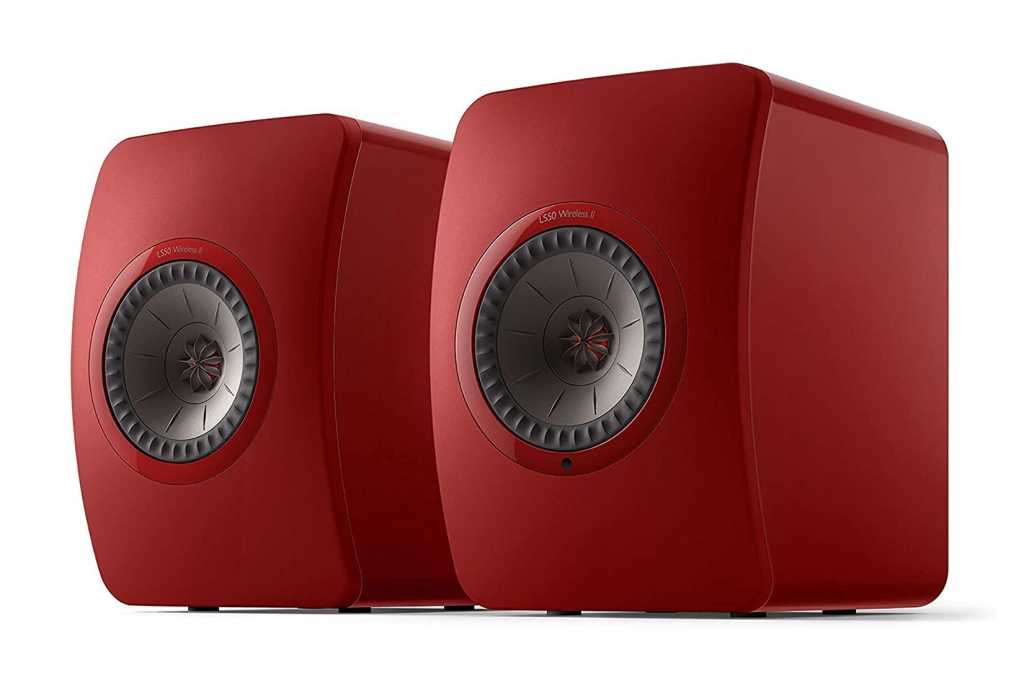 Great sound, sleek looks, and compact dimensions render the KEF LS50 Wireless II uber desirable. On the downside, you might need a bank loan and an ethernet run to get the pair rocking right.

But I sense the speakers’ most receptive audience will be well-heeled audiophiles, downsizers, and de-clutter advocates whose appetite for sonic excellence now far exceeds their available space for mounds of hi-fi gear and physical albums.

And while KEF speakers have a reputation for being demanding in terms of their power requirements, the onboard amperage driving this show more than meets the challenge. As well it should, given the set’s primo pricing: $2,799.99 for the pair.

Setup and operation is straightforward, with precious little (and surprisingly simple) fine-tuning involved. In the Easy mode first presented to the user (there’s also an Expert option revealed in KEF’s online user manual), the KEF Connect app simply asks you to indicate the size and reverberant nature of the room where the speakers are placed, as well as where they’ll be placed in the room. The app then applies digital signal processing to adjust the bass and treble appropriately. Add a KEF subwoofer, such as the punchy, 10-inch, 300-watt Kube 10bRemove non-product link ($750) I also auditioned, and the KEF Connect app will optimize the trio’s crossover frequency as well.

The good news is that wherever you plop them down, these stylish things will certainly dress up the neighborhood. Note the shapely two-tone face, slim but deep 12 x 7.9 x 12.2-inch (HxWxD) dimensions, and the equally handsome rear panel with its color-matched port and stylishly integrated heat sink. Small but weighty at 22 pounds each, these cuties even come in a variety of color combos to match with your home’s interior décor.

KEF calls its two-in-one speaker configuration Uni-Q, and it’s the secret sauce that makes its sound come together like no other. Unlike old school, space-saving two-in-one coaxial speakers where the tweeter “floats” in a separate horn-like enclosure in front of the woofer, the low frequency (LF) and high frequency (HF) drivers in a Uni-Q array are fully integrated to function as a single point source. The woofer cone even does double duty as a wave guide, aiding in the smooth dispersion and integration of the dead-centered tweeter’s output.

Now in its 12th generation, Uni-Q has gained a maze-like, frequency-filtering system called Metamaterial Absorption Technology (MAT) that connects to the rear of the tweeter and absorbs 99 percent of the back-wave energy from 600Hz up that can cause time-smearing distortion.

KEF installed Class D amplifiers in each speaker that drive the 5.25-inch composite aluminum woofer/mid-range driver with 280 watts of power, and 100-watt Class AB amps to drive the 1-inch vented aluminum dome tweeters neatly seated in the center of the woofers.

The LS50 Wireless II are costly, quality-first luxury goods that reward the discerning listener with a richly detailed sonic view of the world. With a frequency response of 45Hz to 47kHz +/- 3dB (that’s before you add a sub!), they’re all you’d crave for music and TV sound in a smaller living room or den, where the tight articulation of the low-frequency driver and well-tempered rear port’s air pumping can make the bass response seem quite palpable. In a larger room, you’ll be happier with a connected subwoofer adding another octave of low-frequency depth.

Fitting for speakers delivering high frequencies detectable only by extraterrestrials (I’m kidding—mostly), these things can process digital files with up to 24-bit resolution and with sampling rates as high as 384kHz via a network connection (both MQA and DSD256 files are supported), 24/96 via digital optical connection, and 24/192 via coaxial digital or HDMI eARC.

You can also stream music from all the most popular services, including Amazon Music (announcing just today support for Amazon’s HD and Ultra HD tracks), Deezer, Qobuz, Spotify, and Tidal. The speakers can be used with the Spotify Connect and Tidal Connect apps, as well. as Apple AirPlay 2 and Chromecast. The system is Roon Ready to boot. You can use Bluetooth if you want, but you’re limited to Bluetooth 4.2 and there’s no support for aptX. Curiously absent? Apple Music.

I found the KEF LS 50 Wireless II especially telling and rewarding when streaming high-resolution (CD-quality) and even ultra-high-res (SACD-, DVD-Audio- and Blu-Ray Audio grade) live-cut recordings blessed with naturalistic, barely processed vocals and acoustic instrumentation. With my eyes closed, the original cast recording of Lin-Manuel Miranda’s Hamilton really put me in “the room where it happened.”

I’d argue that the high-res sonorities of Hiromi Uehara’s new jazz-and-classical fusing Silver Lining Suite ups its charm a good 20 percent, owing to the immaculate 24-bit/192kHz encoding (streamed via Qobuz) and the KEF speakers’ vivid portrayal of her Yamaha concert grand and violin-, viola-, and cello-wielding playmates. Likewise telling were 24/96 streams of Donald Fagen’s two new concert releases—The Nightfly: Live and the Steely Dan set Northeast Corridors—as well as a brassy Montreux Festival set by Van Morrison and company appended to the 2019 Deluxe Edition of The Healing Game. What a nice surprise!

I’ve also greatly enjoyed exploiting these speakers as near-field monitors, reclining between the speakers in a flashback to my wasted youth; most fittingly with the new Let It Be box set that expands greatly on The Beatles’ least-produced late-period album. The LS50 Wireless II delivered a fly-on-the-studio-wall listening experience, and what a trip it is to hear stripped-down, remixed, and radically different work-in-progress renderings of tunes like Get Back, Don’t Let Me Down, and She Came in Through the Bathroom Window. (Incidentally, these juicy table scraps will also be served from Thanksgiving-time on in a new three-part, six-hour Disney+ docuseries The Beatles: Get Back, produced and directed by Peter Jackson.)

While Speedtest on my iPhone 12 Pro clocked Wi-Fi download speeds in my listening room at 320Mbs, the informative KEF Connect app tracked its speakers processing a mere 17Mbps. During prime-time hours in my neighborhood, that reception rate shrunk to as little as 4.9Mbps.

That’s still okay for nabbing internet radio and the current free/premium versions of Spotify (160Kbps/320Kbps respectively). But that speed wasn’t enough for Tidal, and it’s half what’s needed to stream Qobuz in a non-stuttering fashion.

KEF’s user manual helpfully suggests keeping the speakers “within line of sight” of your router if you want to use Wi-Fi. When I tried that remedy, the speakers’ streaming rate did jump up to 36Mbps, but my router isn’t in the room where I hang out and listen to music.

So, I wound up asking my electrician buddy John Siemiarowski of Electrical Wizardry) to run an ethernet cable from the router to my listening room. Once hardwired to my network, the KEFs’ streaming speed shot up to 79Mbps, making for much happiness in high-res streaming land.

Bottom line: Yes, these things can be demanding. But the very best never comes cheap. And the KEF LS50 Wireless II give as good as they get. Even if you can’t afford a pair now, they’re worth an instructive, in-store audition. This is the stuff home-audio dreams are made of.