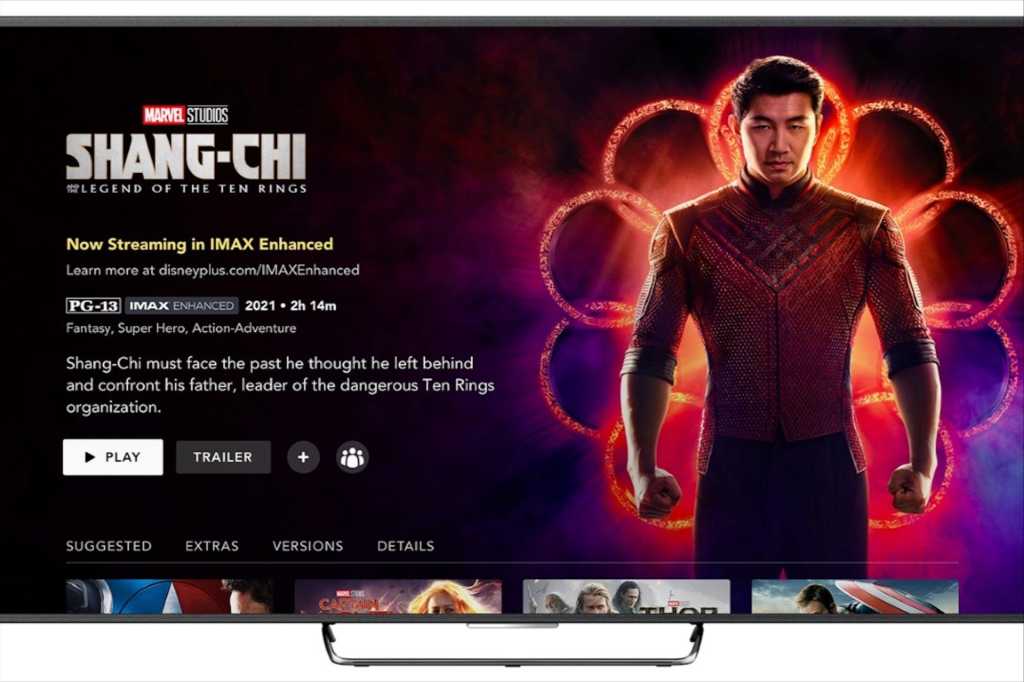 Some of your favorite Marvel movies on Disney+ are about to look a lot taller, with the streamer announcing that it’s bringing the jumbo IMAX Enhanced format to its platform later this week.

The recent Shang-Chi and The Legend of The Ten Rings will be among the first Marvel movies to get the IMAX Enhanced treatment, along with Iron Man, Guardians of the Galaxy, Captain America: Civil War, Black Panther, and Avengers: Endgame, plus seven more. The IMAX-ified movies will land on Disney+ on November 12, which just happens to be Disney+ Day.

What’s so special about IMAX Enhanced? Well, for starters, no: It won’t magically make your TV screen 70 feet tall. What it will do, however, is expand the aspect ratio to 1:90:1, which offers up to 26 percent more picture for “select sequences,” similar to what you’d see in an IMAX theater.

The Marvel movies on Disney+ that are arriving in the IMAX Enhanced format were previously shown in a widescreen 2.35:1 aspect ratio, which explains the black bars at the top and bottom of your TV screen. Because typical flatscreen TVs have a 1.85:1 aspect ratio, a 1.90:1 IMAX Enhanced picture will still leave horizontal black stripes on the display, but they’ll be tiny slivers rather than big black bars. (It’s worth noting that a couple of Marvel movies, namely The Avengers and Ant-Man, were already filmed in a 1.85:1 aspect ratio.)

Besides the taller aspect ratio, IMAX Enhanced also offers a series of “enhanced” audio and visual technology that will be coming to Disney+ at a later date, including IMAX “signature” sound via DTS:X.

Disney+ is the first major streaming service to offer titles in the IMAX Enhanced format, which was previously available on Sony’s Bravia Core streaming app.

There is also a series of IMAX Enhanced-certified TVs (including a TechHive Editors’ Choice, the Hisense U8G-series 4K TV), projectors, A/V receivers, and speakers that can automatically detect IMAX Enhanced content and have met “carefully prescribed performance requirements” set by IMAX and DTS. That said, you don’t actually need an IMAX Enhanced-certified device to stream movies in the format.

Here are all the Marvel movies on Disney+ that will arrive in the IMAX Enhanced format on November 12: