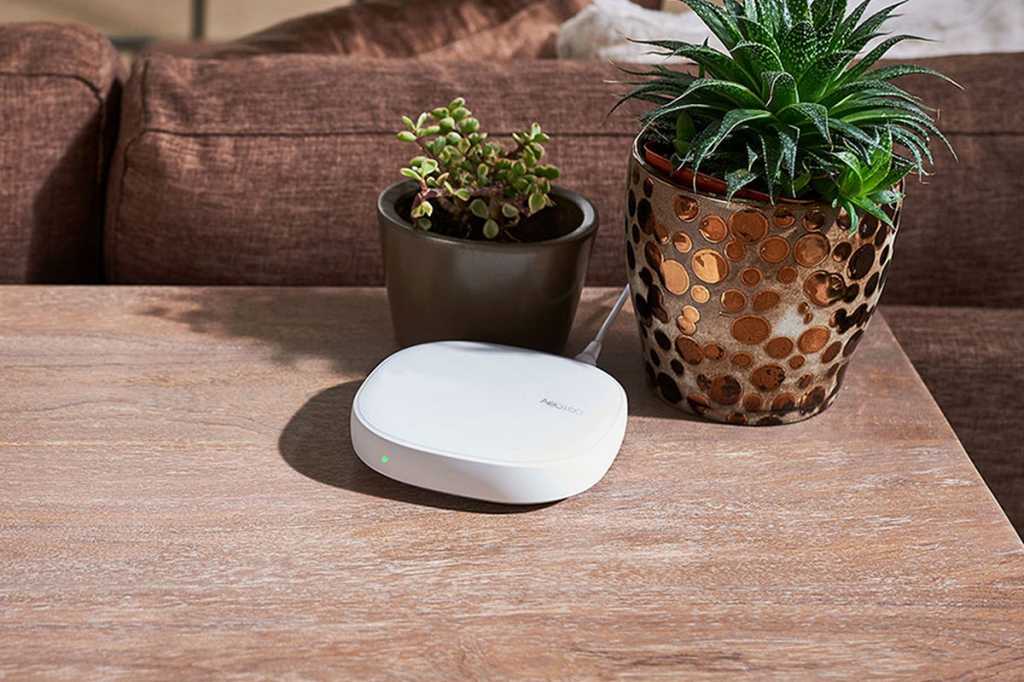 Simple, straightforward, and easy to navigate, the Aeotec Smart Home Hub can control your castle.

If the Aeotec Smart Home Hub looks familiar, it’s because it’s a millimeter-to-millimeter clone of Samsung’s discontinued third-generation SmartThings Hub. It can integrate a smart home full of devices, so long as they don’t rely on Apple’s HomeKit technology.

Rather than tiny and unobtrusive, the all-white Aeotec hub is about the size of a mesh router at 4.9 x 4.9 x 1.1 inches (WxDxH). That’s about four times the size of the diminutive Hubitat Elevation hub and humongous compared to the Aqara E1. It lacks keyholes on its bottom, so you can’t easily hang it on a wall, but its 7-ounce weight means that adhesive Velcro strips will do the job.

Showing its technological roots, the Aeotec hub comes with a Samsung AC adapter. There’s also has a power cable, an ethernet cable, and a start-up booklet in the box. Like the Hubitat, it lacks a battery back-up, but because all its commands and settings are stored online, they shouldn’t get wiped out by a power failure.

As is the case with the Hubitat Elevation, the Smart Home Hub has an ethernet port for connecting to a home network. It can’t use power-over-ethernet (PoE) to replace the AC adapter that would have allowed it to be put in places without a nearby outlet. The Aeotec hub goes a step farther than the Hubitat Elevation by including 802.11ac Wi-Fi networking, making it easier to set the Smart Home Hub up in the best place to connect with the entire house rather than just what’s near the router.

Neither the Aeotec nor Hubitat home hubs, however, have a backup communications portal, like a mobile network LTE connection. The Ezla Secure hub has that and a backup battery for fail-over operations as well.

The Aeotec hub’s front status LED lights up green when everything is working, blue when it’s connected to the home network but lacks an internet signal, and alternates between red and green when it’s ready to be configured. The LED is red when it has a hardware issue that requires restarting the device.

Inside the Aeotec Smart Home Hub

Under the skin, the Aeotec Smart Home Hub has a 528MHz ARM Cortex A7 processor that uses 2GB of RAM and 4GB of flash storage for its firmware and local settings compared to the Hubitat’s 1.5GHz quad-core processor, 1GB of RAM and 8GB of storage space. While the Hubitat’s local focus is a benefit when your broadband connection fails, the Aeotec’s internet emphasis means any connected devices can be controlled from anywhere there’s an online connection.

Able to connect with Zigbee (including Philips Hue), Z-Wave, and Wi-Fi devices but not Bluetooth accessories, the Aeotec hub can handle voice commands from Alexa and Google Assistant. It can’t, however, work with Apple’s Siri or HomeKit ecosystem. This could be remedied in the near future thanks to the company’s close relationship with Matter. If all goes well, just about any supported device will theoretically be able to connect with just about any supported hub for the closest thing to universal compatibility that smart home products have ever seen.

In the here and now, the hub works with hundreds of devices, including—unlike the Hubitat—Wemo and Nest devices. Aeotec offers the bonus of a family of smart home products that it sells. The line ranges from water leak and motion sensors to video cameras and control buttons. The company even sells a range extender for Z-Wave mesh networks.

Priced at $135, the Aeotec Smart Home Hub is on a par with the $130 Hubitat Elevation hub. The Aeotec hub comes with a one-year warranty, lifetime support, and doesn’t require any subscriptions. That makes it the obvious choice for cheapskates, like me.

Building a smart home around the Aeotec gear is not like using any other hub. That’s because the Aeotec hardware doesn’t have its own app. Everything is done with the Samsung SmartThings app. There are versions for Android and iOS and the app works with Galaxy SmartTags and other Samsung products. When it’s ready to connect, the hub blinks red and green.

Next, I picked Smart Home Hub from the interface and tapped Start on my Galaxy S20 phone. I noted that the location for the hub is the Office and I allowed the software to see my location.

Next, I selected ethernet rather than Wi-Fi for its connection portal due to higher reliability of a wired connection. It worked just as well using wireless data.

I then scanned the identifying QR code on the bottom of the unit. The app automatically registered the hub and updated its software.

I finished by naming the hub. This took seven minutes to accomplish. It was also among the easiest smart home hub to install.

Time to add devices. After tapping “+” to add my WeMo outlet switch. I picked it from the list and in three minutes it was connected. I followed this up by adding a Leviton DZPA1 Z-Wave Plus outlet and a Linkind Zigbee floodlight.

I had one more task: integrate two of the room’s lights into a group. Rather than asking during the set-up sequence, this needs to be done later. After tapping Add Lighting Group, I named it and added devices. All told, it took about 15 minutes, versus 45 minutes for doing roughly the same thing with the Hubitat Elevation.

My major work was done, because the SmartThings app is complete with everything needed to control and automate the devices. Unfortunately, the Aeotec hub can’t be accessed via a connected browser, as is the case with the Hubitat Elevation, but the SmartThings Windows 10 software worked well.

The good news is that the app is functional across a range of uses. For many of the device screens, there’s a built-in switch for turning it off after an hour—a nice touch for the forgetful.

For things like the Linkind floodlights, it looks like the native app with the ability to tune the color of the light and dim its output. There are also simple automation controls for turning the device on or off at certain times, including sunrise and sunset.

After a few minutes to link SmartThings with Alexa, voice control worked well. Soon I was able to turn anything on or off, including my group of two lights. There was one big surprise: the app automatically recognized my Samsung M7 smart display. Without any installation effort, I was able to turn it on and off, change the programming, and adjust the volume.

Aeotec Hub in the real world

The Aeotec hub had a 70-foot range, using the Leviton smart outlet in my 100-year-old house with two intervening walls. That’s a little short of the Hubitat’s 75-foot range, but it should be fine for most homes, particularly if the hub is centrally placed or you deploy a range extender

While running, the Aeotec hub used 1.6 watts of power. If you pay the national average of 13 cents per kilowatt-hour of electricity, it could cost $1.80 a year to use. That seems like a good deal to me considering all that the Aeotec hub can do for a smart home.