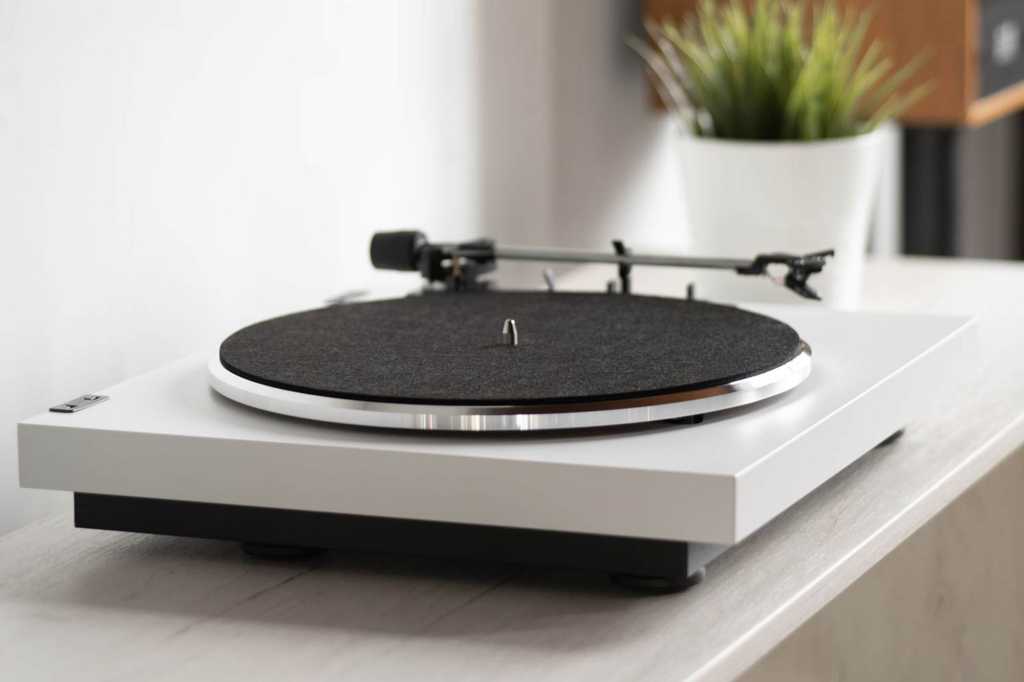 Over the past decade, Andover Audio has established a reputation for making high-quality audio accessible to a broader audience, with easy-to-use gear that delivers great sound with minimum fuss. Their new $599 SpinDeck Max turntable represents a new peak in that mission, delivering fully automatic operation and great sound for the money.

The SpinDeck Max is essentially a high-end record player designed to plug-and-play straight out of the box. Put an LP or 45 on the platter, set the speed, flick the lever to “Start,” and the turntable takes care of the rest, lifting the tone arm and dropping the needle to begin play and returning it to rest and shutting off when the vinyl has finished playing.

That feature will be a bug for some audio enthusiasts, who prefer fully manual operation or might tolerate semi-automatic operation that requires the listener to manually start play, but returns the tonearm to rest upon completion of the record. There’s truth in the widespread belief that more mechanical moving parts on a turntable introduce more opportunities for vibration to distort the sound, but listeners who insist on manual operation have dozens of options.

Anyone who grew up during vinyl’s first wave probably started with a turntable like this one, but listeners who want ease of operation and great sound today don’t have many choices. The SpinDeck Max offers a high-quality alternative to the mass-market all-in-one record players available in department stores, and it gives vinyl neophytes something to buy that sounds great and won’t trash their records with a poorly-balanced tonearm or a cheap stylus. And that, in a nutshell, is why you shouldn’t start your vinyl experience with a cheap turntable: Your vinyl won’t sound very good, and the turntable will ruin it before you can play it on anything better. 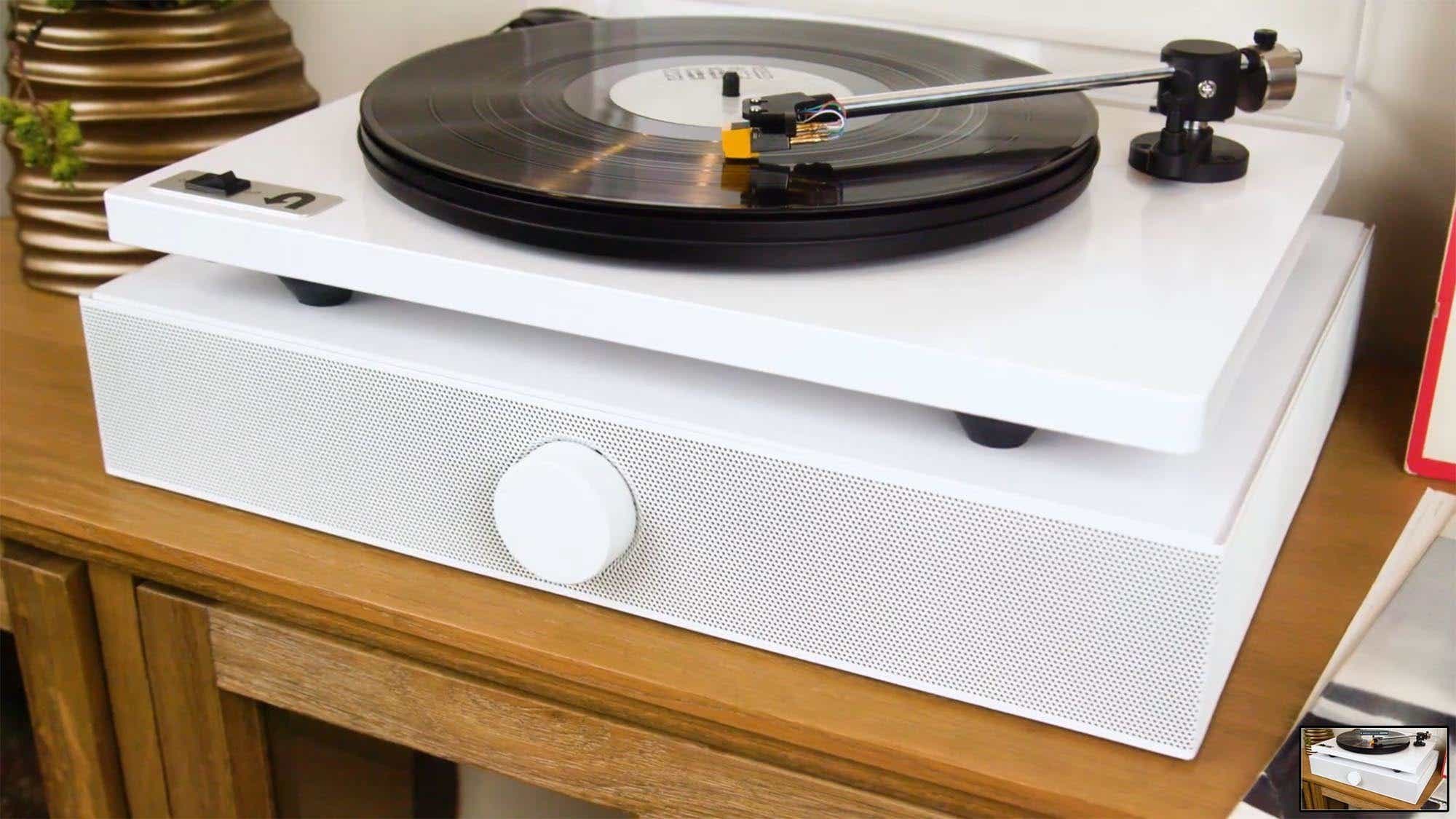 Andover Audio also makes the SpinBase, a $299 self-powered stereo speaker that’s designed as a platform for your turntable. The SpinDeck Max paired with a SpinBase is pitched as an all-in-one, space-saving solution for vinyl novices. And if you want more low-end oomph, there’s Andover’s SpinSub powered subwoofer.

The company’s social media is full of posts celebrating the joys of $1 thrift-store vinyl scores, so they’re not wrapped up in debating the merits of half-speed masters or rare Japanese pressings, even though this turntable will do a fine job with anything you choose to throw its way. Andover Audio is pitching the idea that vinyl collecting doesn’t have to be an expensive hobby, even if it is one that deserves gear that’s good enough to deliver a great listening experience.

The SpinDeck Max is available in either white or black and is manufactured in Germany in collaboration with Alfred Fehrenbacher GMBH, a factory with more than 60 years of experience in building quality turntables. It’s the successor to the manual SpinDeck, which was manufactured for Andover by Pro-Ject.

The turntable has a sturdy construction and weighs 16 pounds. Elastomeric cones absorb vibration to assure stable playback even on unstable surfaces Both the machined aluminum platter and tonearm are isolated from the sturdy MDF plinth.

It’s a belt-drive system built around a low-vibration DC motor with internal electronic servo regulation designed to deliver accurate speed and inaudibly low wow and flutter. Based on my listening, the SpinDeck Max delivers on that promise.

The turntable comes with a pre-balanced, low-mass tonearm and a high-quality Ortofon OM10 cartridge with an elliptical stylus and light 1.5g tracking force. The SpinDeck Max really does work right out of the box. The belt is pre-installed, and the turntable has a pre-set counterweight with no balancing necessary. The OM10 sounds excellent, but users who want the benefits of a fully automatic turntable with even higher performance can upgrade the cartridge and stylus.

Andover Audio includes a puck-style 45 rpm adapter in black plastic but there’s no storage well cut into the plinth, so users will have to figure out for themselves how to keep track of the insert.

Setup is remarkably simple: Remove the SpinDeck Max from the box, remove the transportation locks from the floating subchassis. You then put the platter over the center spindle, attach the cover hinges to the plinth, and slide the cover into the hinges.

If you prefer manual operation, the turntable starts and stops when the tonearm is moved from or returns to its rest stand. There’s a switch to raise and lower the tonearm from vinyl, and another switch to change turntable speed from 33 rpm to 45 rpm and back.

I listened to SpinDeck Max two ways, both with Andover Audio’s excellent SpinBase turntable speaker system and paired with a system that includes a NAD Phono Preamp PP-1 through a NAD Stereo Preamplifier S100 and a NAD Monitor Series Amplifier 2400 into a pair of vintage Bowers & Wilkins P5 floor-standing speakers.

A new 2021 pressing of Paul McCartney’s McCartney III Imagined remix album features reworked versions of songs from the artist’s most recent album by an interesting variety of younger artists, including Beck, St. Vincent, Dev Hynes from Blood Orange, Anderson .Paak, and Robert Del Naja from Massive Attack. McCartney gave everyone permission to indulge their own muse, and the SpinDeck Max easily handles the both the low- and high-end frequencies highlighted on these tracks.

In the spirit of Andover Audio’s own charity-shop crate digging, I tried out a pristine U.K. $1 copy of John Keating’s Keating Straight Ahead, an easy-listening classic that features reworkings of pop hits like “Ticket to Ride,” “On Broadway,” and “Spanish Harlem.” Released in the London Records Phase 4 Stereo series, the recording emphasizes extreme channel separation, and the SpinDeck Max absolutely shows off the recording gimmick to great effect. The turntable also did a great job with a used copy of Darryl Hall’s debut solo LP Sacred Songs, produced by and featuring Robert Fripp, highlighting the interplay between Fripp’s adventurous production and Hall’s soulful vocals.

When the SpinDeck Max is paired with Andover Audio’s SpinBase, you have an outstanding system that plays vinyl and streams via Bluetooth for around $1,000. You can upgrade with the $299 SpinSub subwoofer and the $199 custom-designed SpinStand record stand for the SpinBase that includes two LP storage shelves (or one shelf for LPs and one for the SpinSub). Andover Audio takes all the guesswork out of the equation for new users with this integrated setup.

Vinyl is back and seems here to stay. The Andover Audio SpinDeck MAX is squarely aimed at listeners who want absolute ease-of-use combined with the benefits of great sound. The included Ortofon OM-10 cartridge is a solid performer with excellent stereo imaging. This is the perfect introduction to high-quality audio for first-time buyers, and a great-sounding, reasonably priced option for serious listeners looking for a turntable in this price range.