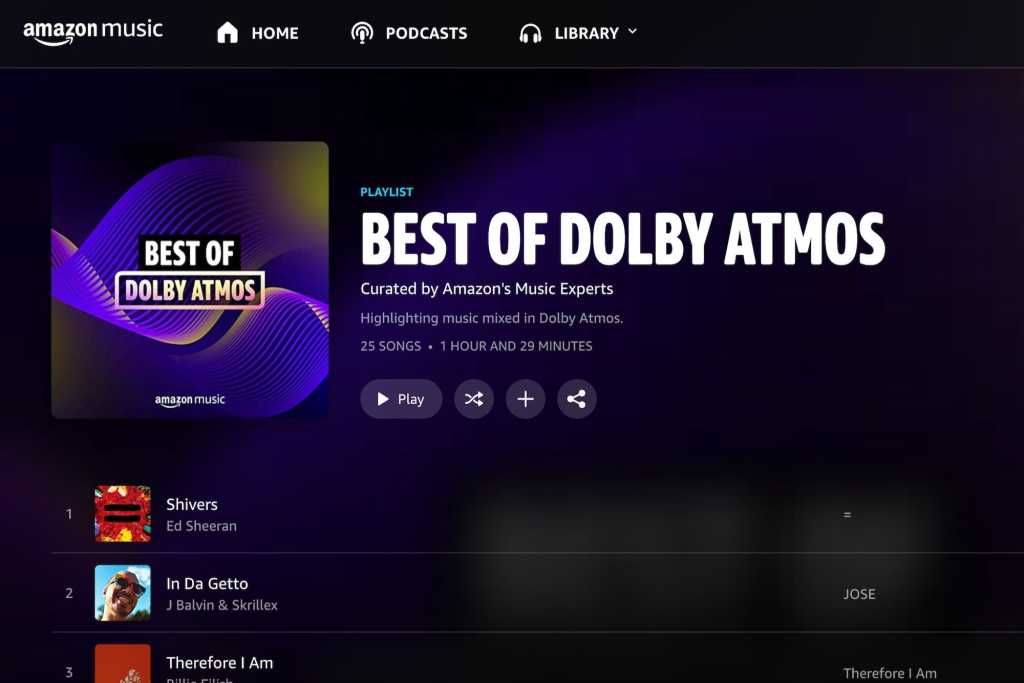 Amazon Music was one of the first music streamers to offer spatial audio playback for its tunes, but you couldn’t listen without the right hardware. Now, Amazon says you can play spatial audio tracks on any pair of cans, including the ones you’re wearing right now.

Just fire up the Amazon Music app for iOS or Android, plug in your headphones, and tee up a spatial audio song that’s been mastered in either Dolby Atmos or Sony’s 360 Reality Audio format. Just keep in mind that you’ll need to be a paying Amazon Music Unlimited subscriber to unlock spatial audio playback.

Want to try spatial audio on Amazon Music Unlimited for free? Click here to sign up for a free three-month trial.

Up until now, only a few select speakers supported spatial audio via Amazon Music, including Amazon’s Echo Studio and Sony hardware such as the SRS-RA3000 and SRS-RA5000 wireless speakers and the HT-A9, HT-A7000, and HT-A5000 home theater systems. The Sonos Arc and the second-gen Sonos Beam are slated to support Dolby Atmos tracks on Amazon Music later this year.

Amazon announced back in May that it would stop charging extra for lossless, high-resolution, and spatial audio tracks, although Unlimited subscribers still had to opt in to the Amazon Music HD tier before they could stream the songs. As of today, however, all Unlimited users will get lossless and spatial audio access without having to upgrade their subscriptions.

Amazon Music Unlimited costs $8 a month for individual Prime members or $10/month if you’re not on Prime. There’s also a family plan for $15 a month.

Amazon Music offers more than 75 million lossless music tracks, including 7 million in 24-bit high-resolution format. Amazon hasn’t specified how many spatial audio tracks are in its catalog, saying only that it has a “growing” collection.