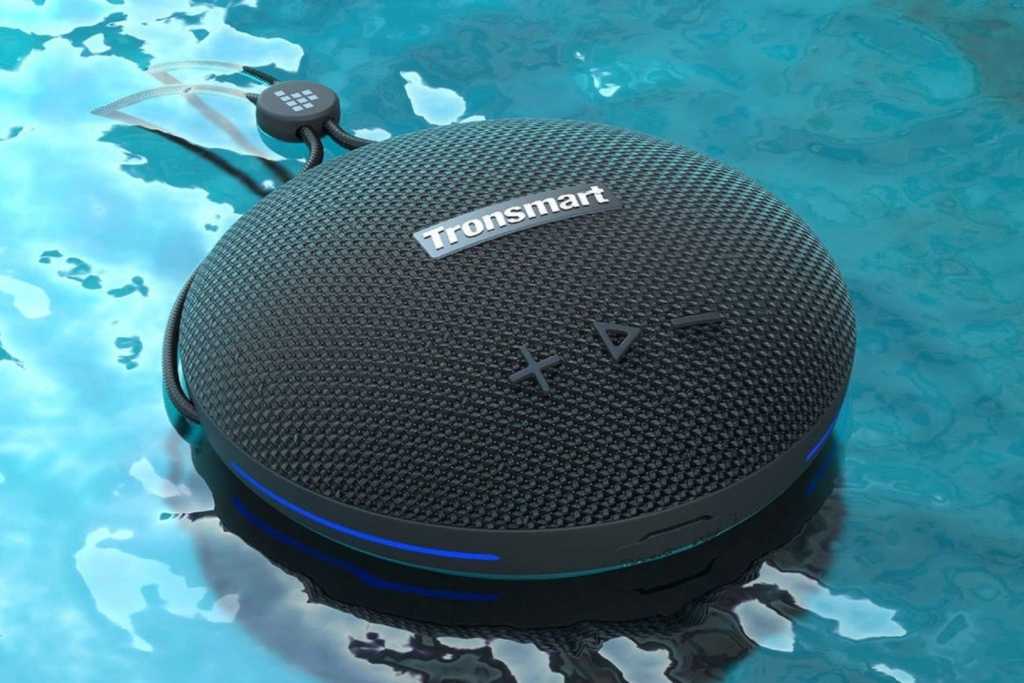 Tronsmart
At a Glance

This small, waterproof, personal Bluetooth speaker may not be best of breed in sonic terms, but it’s close and half the price of the brand name competition.

It’s no startling revelation that a portable, IPX7-rated Bluetooth speaker named Splash 1 is meant for going to the beach, dipping in the pool, and trekking the rough and wooly outdoors. The name also sounds good, but what is a bit startling about this water-resistance speaker is the price: a ridiculously low $30.

The Splash 1 is a circular puck about 4.25 inches in diameter and roughly two inches thick. It floats and sports a captive adjustable lanyard that was just barely able to accomodate my head. Then again, the speaker designed to hang off a beach chair arm, your backpack, a shower spigot, or the like rather than around your neck, so no biggie.

The upper portion of the unit is the speaker grill, which is also home to the play/pause and volume up/down buttons. The lower half offers two multi-color slit LEDs for decoration (they change colors roughly in time with the music), four tiny LEDs for battery life, mute, and power/Bluetooth pair buttons, as well as a captive plug that hides the USB-C charging port and the 3.5mm auxiliary audio input.

The first digit after “IP” (Ingress Protection rating) represents dust resistance, while the second denotes the level of water resistance. The “X” in IPX7 means the device hasn’t been tested or rated for particulate matter intrusion, and the “7” denotes maximum resistance to liquid, i.e. the speaker will function after being immersed in three feet of water for up to 30 minutes.

Why the “X”? While water evaporates, chalky stuff (as anyone who’s dealt with fine particulate matter will tell you) persists like a nightmare. In other words, don’t use the Splash 1 in a talcum factory and expect it to play forever without grill removal and a thorough cleaning.

For a small monophonic speaker, the Splash 1 sounds pretty darn good—competitive with speakers that cost twice as much. That said, small and monophonic don’t make for audiophile sound, no matter what the cost (physics, my friends). Caveats aside, the Splash 1’s performance is more than adequate, particularly on the beach, beside the pool, or around the RV.

The primary downside to the Splash 1 (and its brethren) is the lack of thump. You can make out the bass instruments and the kick drum, but you won’t feel them, as everything below approximately 100Hz is rolled off drastically. The only speaker in this category I’m aware of that even comes close to thump is Sony’s SRS-XB13, but that’s twice the price and still not really satisfying in the low end.

The Splash 1’s mid-range and high frequencies are dialed in nicely, though monophonic speakers always muddy things up slightly (depending on the material, of course). Overall, the Splash 1 is easy on the ears, but nothing to write home about. Like the competition.

Tronsmart claims 24 hours of run time from a 2200mAh battery, and I was somewhere near 10 hours with the indicator lights still showing a half charge. Mileage will vary with volume (I was listening rather quietly while I worked).

The Tronsmart Splash 1 is a good-sounding personal portable speaker, given the limitations of the breed. I might rate Sony and Bose ahead of it, but only just, and as noted, similar products from those companies cost twice as much or more. If you’re in the market for a small personal speaker that will survive life outdoors, the Splash 1 is a very good deal.

(Note that I’m still in favor of Tronsmart coming up with a sexier logo.)