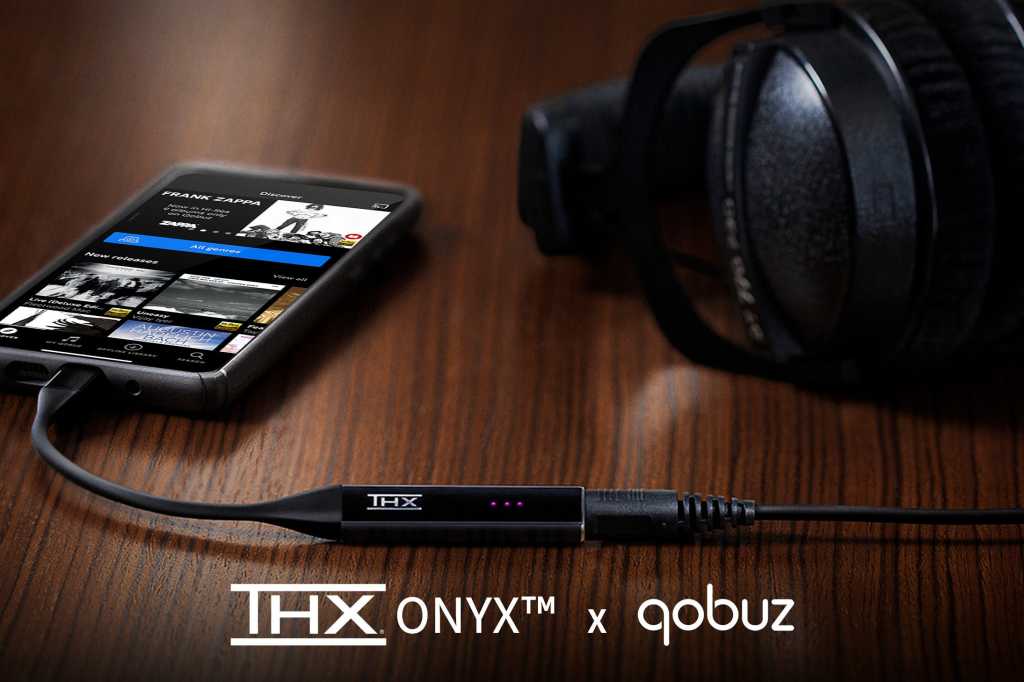 Thanks to a partnership between the high-res music-streaming service Qobuz and audio equipment manufacturer THX Ltd., anyone who buys a THX Onyx portable DAC/headphone ampRemove non-product link can get a three-month subscription to Qobuz for free.

The THX Onyx is based on THX’s own AAA audio technology (the acronym stands for Achromatic Audio Amplifier), which promises to amplify an audio signal with absolutely no coloration. With the Onyx, THX pairs the amp with an ESS ES9281PRO codec (compressor/decompressor) that has an ESS SABRE digital-to-analog converter at its heart.

The $200 THX Onyx is a USB dongle with a USB-C stub cable on one end (a USB-A adapter is provided) and a 3.5mm analog jack for your wired headphone at the other. Yes, I said wired headphone. Even today’s best Bluetooth 5.0 technology remains inferior to what you can get with a cable. Qualcomm’s aptX Adaptive codec, for example, is limited to a maximum sampling rate of 48kHz.

The DAC/headphone amp can be used with any smartphone, computer, or mobile digital audio player that can connect to the internet. But if you want to use it with an iOS device, you’ll need to provide your own Lightning adapter.

I reviewed Qobuz when the service became available in the U.S. market in late 2019 and was immediately impressed with what I heard. Three service plans are offered across two tiers, but they all provide access to more than 70 million lossless tracks (encoded via FLAC) in either CD-quality or Hi-Res Audio (certified by the Japan Audio Society). You get up to 24-bit resolution and sampling rates as high as 192kHz, plus original editorial content.

After your three-month trial, you can pay $129.99 for a one-year subscription to Qobuz Studio Premier, $12.99 per month for a month-to-month membership (which works out to $158.88 annually), or $179.99 per year for the Studio Sublime level that entitles you to 10-percent discounts on the purchase of downloadable Hi-Res Audio.