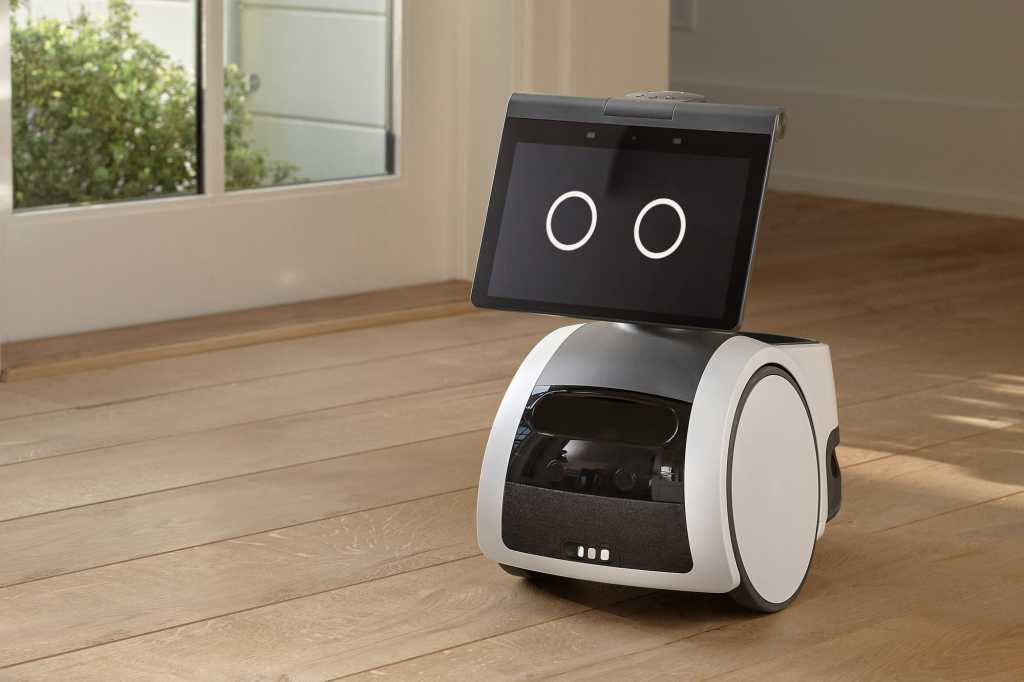 Over the course of an hour on Tuesday, September 28, Amazon rolled out a raft of new smart home products, including an Alexa-powered robot, a wall-mountable Echo smart display, an interactive video phone for kids, the first video doorbell from its Blink division, new home-security products from its Ring subsidiary, and more.

Artificial intelligence—Amazon calls it “ambient” intelligence—was a common thread running through all these new products. The company says this will enable its disparate products to work together seamlessly to deliver an experience that’s more than the sum of its parts. But with a nod to consumers’ growing privacy concerns, each presenter emphasized the ways in which Amazon’s development teams had focused on reducing their products’ reliance on cloud computing, pushing more processing power to the device itself to keep information local and within the users’ control.

Here’s a quick recap of the most significant new product announcements, along with links to our deeper dives.

Amazon has been working on a household robot for years, so it’s no surprise that Astro is essentially an Alexa on wheels. The company seems intent on giving the bot its own personality, however, as it will respond to its own wake work, and animated eyes on its display will react to your verbal commands.

Astro can do everything an Echo Show can, including making two-way video calls, streaming movies and TV shows, and controlling our smart home devices. Amazon also suggests its bot will make a great companion for people aging in place, while helping remote caregivers maintain personal connections with them. Having its camera mounted on a periscope allows the robot to scan areas that would otherwise be out of its field of view, and it can be tied into a Ring Alarm home security system (provided you have a Ring Protect Pro service plan) to patrol your home, react to sensor alerts, and warn you when it encounters unfamiliar people in your home.

Like higher-end robot vacuums, the three-wheeled Astro uses simultaneous localization and mapping (SLAM) technology to navigate your home’s interior, moving around objects newly in its path and automatically braking if a pet or object moves in front of it. You can read more about Astro at the preceding link.

The rumors of a wall-mounted Echo smart display came true with the unveiling of the Echo Show 15, although it can be set up on a countertop as easily as hung on a wall. Boasting a 15.6-inch, 1080p touchscreen, the Echo Show 15 can operate in either portrait or landscape mode. Its onboard camera will recognize your face as you approach, and it will then display customized information—your reminders, calendar events, sticky notes, or even the music you were just listening to—accordingly.

In keeping with Amazon’s privacy initiative, the new smart display is powered by Amazon’s quad-core AZ2 Neural Edge processor, which will process voice commands locally instead of sending voice recordings to the cloud. You can read more about the Echo Show 15 at that link.

Ring announced its airborne home security camera more than a year ago, and the Ring Always Home Cam is finally coming to market—to some people, at least. The camera-equipped indoor drone will be released as one of Amazon’s Day 1 products, meaning you’ll need an invitation to buy one.

To anyone—everyone?—uneasy with the idea of an unmonitored camera flying around the interior of their home, Amazon emphasized that the camera can operate only while your Ring Alarm system is in armed away-away mode, and that the drone’s camera is physically blocked while it’s sitting in its base. We have more information about the Ring Always Cam at the preceding link.

Ring makes our favorite DIY home security system, and the all-new Ring Alarm Pro promises to simplify your smart home by integrating an Eero 6 router into the same box. The Eero 6 is a mesh Wi-Fi router, so you’ll be able to easily extend the reach of your network by adding additional Eero 6 nodes. A kit that includes the base station plus four door/window sensors, a motion sensor, a Z-Wave range extender, and a keypad, will sell for $300, while a 14-piece kit add four more of those contact sensors, an additional motion sensor, and an extra keypad will go for $380.

A new feature called Ring Edge will help deliver on Amazon’s promise to reduce the need to transfer information to the cloud. The Ring Alarm Pro will feature a microSD card slot—a 64GB card will be included—will store video recordings from Ring security cameras, and those recordings will be processed on the device itself. That feature, however, does depend on your subscribing on one of the Ring Protect service plans, which start at $3 per month. You can find more details about Ring Alarm Pro at the preceding link.

Amazon has never shied from pursuing children’s products, and the Amazon Glow is the company’s most ambitious product to date. Consisting of a cloud-connected smart display, a video projector, and a 3D scanner, the Glow will let children not just engage in video chats over the internet, the two parties will be able to interact—playing games, solving puzzles, and drawing pictures.

The manufacturer says it has partnered with the likes of Disney, Mattel, and Sesame Workshop to develop interactive content for the Glow, and it has released a software development kit to encourage other companies to produce content of their own. You’ll find our deeper Amazon Glow coverage here.

The announcement that Blink is introducing its first video doorbell is probably less surprising than the fact that Amazon’s budget home-security developer doesn’t already have a video doorbell. The smart device will be priced at just $50, and when paired with the Blink Sync Module 2, will store its motion-triggered video recordings on a local USB storage device.

The Blink Video Doorbell will work with Alexa, allowing you to control the device with voice commands and receive notifications when it detects motion or someone presses its button. Amazon also announced new accessories for its outdoor camera, one that will add a floodlight and another that will recharge the camera’s onboard battery via a solar panel. Our full coverage of Blink’s announcements is at this link.

Amazon decided to focus on price rather than features for its entry to the smart thermostat market. While you’ll encounter plenty of more powerful thermostats—including several with Alexa built in—Amazon’s looks to be a relatively simple model with what looks like a rudimentary display and touch-sensitive buttons for adjusting the target temperature.

The limited details Amazon has released about the new product indicate that it will be connected to Alexa, and will act in concert with Alexa routines, but unlike, say, the Ecobee Smart Thermostat with voice control it won’t be an Alexa smart speaker in and of itself. The primary attraction will be its asking price: Just $59.99. More details about the Amazon Smart Thermostat are here.

We’ll have hands-on reviews of each of these new products as soon as we can get our hands on evaluation units.

Corrected September 30 to report that Amazon’s Astro home robot has three wheels, not two, and that tying Astro to a Ring Alarm home security system will require a subscription to a Ring Protect Pro service plan.