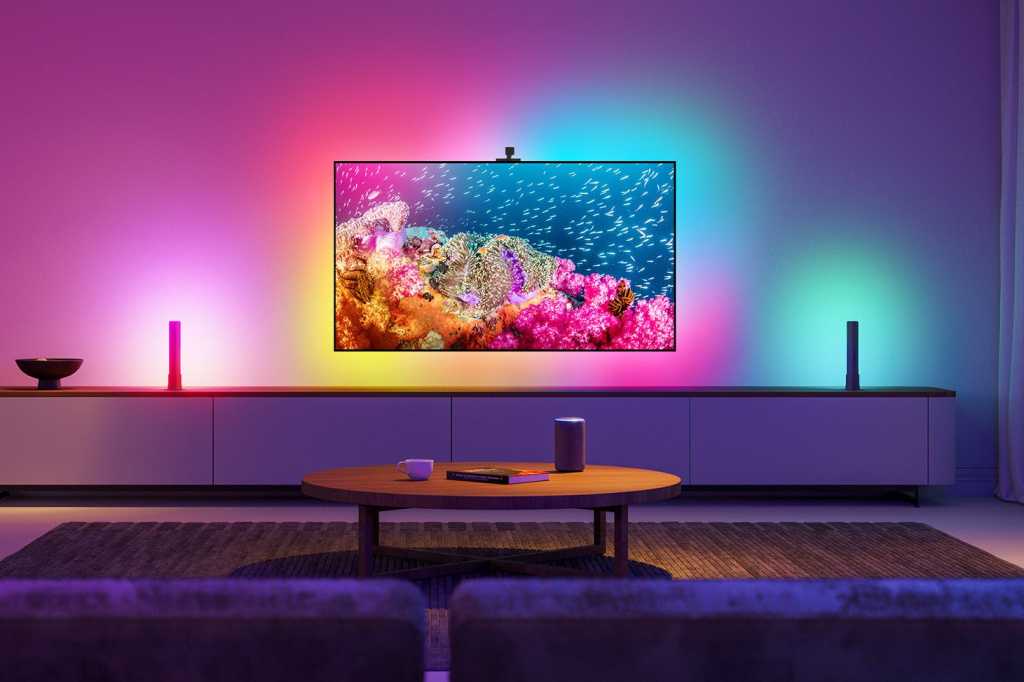 Image: Govee
At a Glance

Better in theory than in practice, this television backlighting system turns out to be more distraction than immersion.

I sometimes think Govee won’t rest until it has bathed every surface in your home—from floor to ceiling—with colored light. The company’s latest innovation is the Immersion Light Kit, a collection of two vertical light bars and a strip of LEDs that are designed to pair with a 55- to 65-inch television, bathing the wall behind the TV in complementary hues to what’s happening on the screen.

It’s a complex collection of gear that relies on a small camera that is mounted on the top or bottom of your TV. This camera relays information about the colors on the screen to the various lighting components, so when, say, the screen is blue, the backlight is also blue, giving the image the appearance of depth.

This review is part of TechHive’s coverage of the best TV bias lighting solutions, where you’ll find reviews of the competition’s offerings, plus a buyer’s guide to the features you should consider when shopping for this type of product.

The lighting is all dynamic, with dozens of individual zones. If the top half of the screen is blue and the bottom is red, the lighting will adjust accordingly. All this gear is wired together and connected to a control unit that sticks on the back of your television and which plugs into wall power. (Otherwise it’s a standalone device; nothing actually connects to your entertainment system.) Note that you can also purchase the strip lights and the light bars separately if you only want one or the other component.’

Setup can be a bit involved, starting with the sheer amount of hardware and cabling involved—especially the LEDs, which must be attached to the back of your TV with adhesive tabs (provided). While connection to Govee’s app and the network is expedient (although it connects to 2.4GHz Wi-Fi only), calibration is a further time commitment, involving the placement of orange, adhesive-backed foam blocks around the edge of your television screen, then using Govee’s app to tell the camera where the screen ends.

This is a complex process, because the fish-eye camera lens distorts the camera’s image considerably, making it difficult to determine the proper boundaries. Ultimately, I had to calibrate the screen three different times, and it still never felt quite right during use, with the right-hand light bar never tracking perfectly with the display. Govee’s app was also prone to losing its connection with the Immersion Kit during this process, which dragged out calibration even further.

Once it’s all finally configured—well, then what? If you’re just looking at a static image, the effect of the edges of the image bleeding off the screen and onto the wall behind it is pretty striking. But that’s not how most people use their television. Unless you’re content to park a fine-art screen saver on the display, you’ll quickly see the impact that a fast-moving TV image has on the backlighting. At 30 frames per second, the rapidly shifting backlights quickly makes for a busy viewing experience, one that can become distracting.

I’m not just talking about Marvel movies and Call of Duty gaming sessions; even a modicum of motion is enough to quickly make the lighting effects grow old. I tried watching the sedate arthouse favorite CODA with the Immersion Kit activated and had to turn it off within 10 minutes. (The “Calm” setting within the app can help, but then the colors don’t match up as well.) The experience simply disengaged me from the content too much. It’s also worth noting that the setup is useless during the day; in even a moderately lit room, Govee’s lights aren’t bright enough to make an impact.

Like all Govee products, the app can also be configured to operate in different ways, including changing color in tune with music, displaying solid colors, and showcasing various animated designs akin to those available on Govee’s other products. None of these make a whole lot of sense attached to a TV, however, and the inclusion of Alexa and Google Home connectivity isn’t particularly helpful outside of turning the system off and on.

At its $150 list, this is a relatively expensive product with decidedly niche appeal (as you can see, current street prices are much lower). For me, the results just weren’t worth the effort, and I suspect many users simply won’t like it at all.