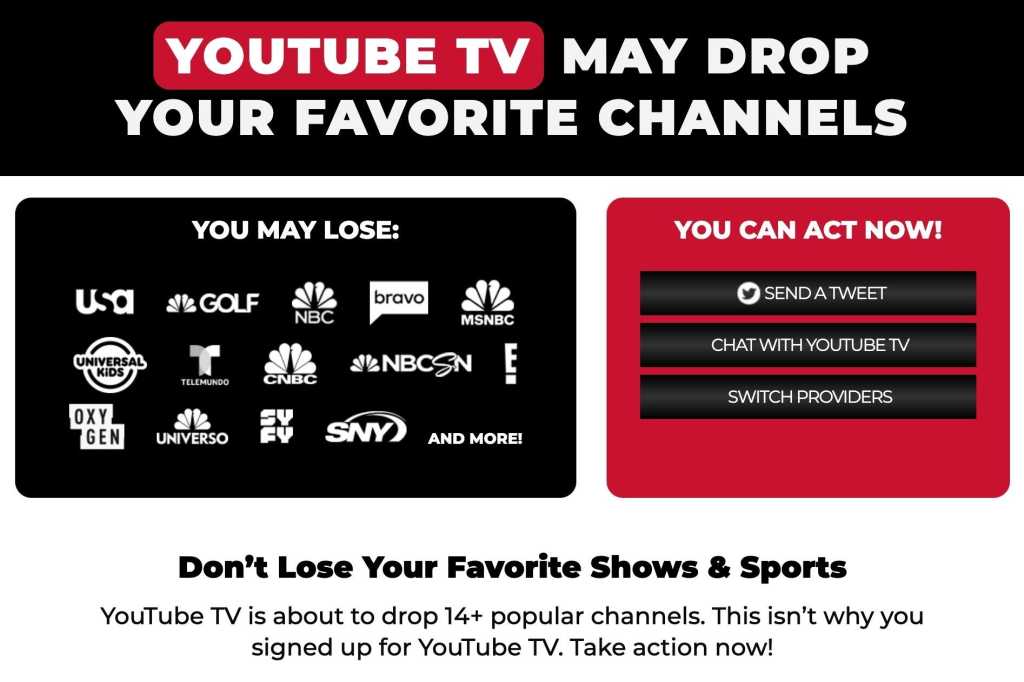 Yes, it’s another YouTube TV carriage dispute, this time involving NBCUniversal, and if the parties can’t strike a deal, YouTube TV users may lose access to all NBC channels on Thursday, just in time for football season.

Speaking of the NFL, gridiron fans watching Sunday Night Football on NBC last night were greeted with a series of banners scrolling across their screens, warning that NBC channels may disappear from YouTube TV’s live channel lineup on Thursday.

Meanwhile, Google-owned YouTube TV pledged to lower its prices by $10 if two sides failed to reach an agreement.

In addition to the banners during Sunday Night Football, NBC stood up a website called YouNeedChannels.com that details all the channels that might get yanked from YouTube TV on Thursday, as well as urging users to tweet about the dispute, contact YouTube TV themselves, or switch to a new live streaming TV service.

In a blog post responding to the spat, Google-owned YouTube said it would lower its monthly rate from $65 to $55 if it does end up dropping NBCU channels.

At issue is YouTube TV’s carriage agreement with NBCUniversal, which expires this Thursday, September 30.

In its blog post, YouTube TV implied that NBCU won’t renew its carriage deal with the live streaming TV service unless it coughs up more cash.

“Our ask is that NBCU treats YouTube TV like any other TV provider,” YouTube said. “In other words, for the duration of our agreement, YouTube TV seeks the same rates that services of a similar size get from NBCU so we can continue offering YouTube TV to members at a competitive and fair price.”

YouTube said that users could use the saved money from its proposed discount to sign up for Peacock, NBCU’s streaming service. But while Peacock does stream Sunday Night Football, it doesn’t offer live access to local NBC affiliates, similar to how Paramount+’s ad-free tier serves up simulcasts of local CBS stations.

Besides its dispute with NBCU, YouTube TV is also wrangling with Roku, which pulled the YouTube TV app from the Roku channel store back in April after the two sides failed to see eye-to-eye on a contract renewal.