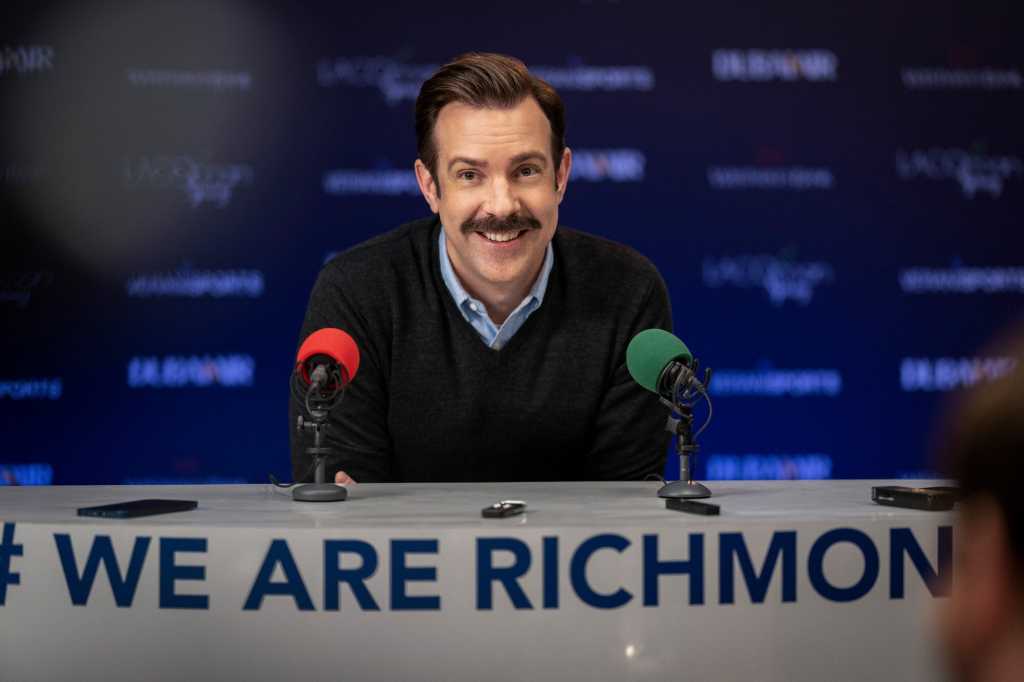 I’d wager a large sum that either Ted Lasso or a free trial courtesy of an Apple device purchase led you to an Apple TV+ subscription. The Jason Sudeikis-led comedy—and recent Emmy winner—is the runaway hit thus far for Apple’s streaming service, but there are other shows, movies, and documentaries worthy of your time.

So, whether you are paying $5 a month for Apple TV+ or enjoying a free trial after buying an iPhone, here’s the best of what to watch on Apple TV+.

Let’s start with Lasso. Now in its second season, this Emmy-winning workplace comedy about an American football coach taking the helm of an English football team manages to be both hilarious and kind. I certainly have enjoyed my share of snarky comedies over the years, but Lasso is the first in a long while that delivers laugh after laugh without the accompanying sarcasm we’ve all come to expect. Jason Sudeikis helped create the show and stars as Ted Lasso, a character who is uncompromisingly optimistic and kind as he navigates his way in a new job in a new country.

Outstanding supporting roles abound, from Hannah Waddingham as team owner Rebecca Welton and Brendan Hunt as expat Coach Beard to Juno Temple as team marketing maven Keeley Jones and Brett Goldstein as the gruff and legendary Roy Kent. The second season has yet to hit the highs of the first, but it’s still filled with feel-good moments and well-earned laughs.

Apple spent big money on The Morning Show to launch its streaming service, hoping the show starring heavyweights Jennifer Aniston, Reese Witherspoon, and Steve Carell would lead people to sign up. Ted Lasso has garnered more attention and likely delivered more subscriptions than The Morning Show for Apple, but both shows are back for second seasons.

Where Lasso is a workplace comedy, The Morning Show is a workplace prestige drama about a morning news show and the fallout after a sexual misconduct scandal of Carell’s character. Aniston plays Carell’s cohost and the established star of the show who battles with Witherspoon as her new co-host. Despite the star power of the three leads, it won’t be long before Billy Crudup as the behind-the-scenes network exec becomes your favorite character.

Another workplace comedy, this time at a video game studio. Created by and starring Rob McElhenney, who you may know from It’s Always Sunny in Philadelphia, the series is about the team behind a popular MMORPG. The Mythic Quest team wrestles with competing creative and commercial interests as they prepare to release the Raven’s Banquet expansion pack. Danny Pudi stars as the head of monetization and F. Murray Abraham as the game’s head writer. Charlie Day and Megan Ganz from It’s Always Sunny are also co-creators. There are 20 episodes available—with two special episodes sandwiched between two seasons.

For All Mankind is another show Apple used to launch its streaming service. This sci-fi series is an alternate history where the Soviets were the first men and women to reach the moon. It mixes fictional and historical figures to envision the space race with the Americans playing catch-up. The first season takes a couple episodes to get going, but then the show finds its sea legs (space legs?).

Season 1 ends in the 1970s, and season 2 picks up in the 1980s and gets going right from the first episode. You can watch all 20 episodes from the first two seasons as you await season 3 to debut, perhaps by next year.

This anthology series tells the real-life stories of immigrants in America. Each of the eight episodes is based on a true story and follows the daily life of an immigrant from a different country in a different spot in the U.S. Created by Lee Eisenberg from The Office and Emily V. Gordon and Kumail Nanjiani from The Big Sick, the series details the challenges and triumphs of immigrant life in America.

You get to meet Kabir, a 12-year-old boy living in Utah with National Spelling Bee aspirations and hotel management responsibilities whose parents are deported to India. And Beatrice, a baker from Uganda living in Louisville. Also, Iwegbuna Ikeji from Nigeria who first experienced America by watching old westerns with his family and now attends college in Oklahoma. And Rafiq, a Syrian man who must flee his family and country after his father discovers he’s gay. More stories are coming up in season 2, which has been ordered but not scheduled.

Bring the theater to your home theater. Come From Away is a live stage recording of a Canadian musical set in the week following the 9/11 attacks. It tells the true story of 7,000 stranded passengers from 38 grounded planes in a small town in Newfoundland and the locals there who helped them. After runs in San Diego, Seattle Washington DC, and Toronto, the play opened on Broadway in 2017. It just arrived on Apple TV+ on Sept. 10 to mark the 20th anniversary of 9/11.

The idea behind Schmigadoon! is what if you took An American Werewolf in London and instead of turning into a horror story, it turns into a musical. It stars Cecily Strong and Keegan-Michael Key as a struggling couple who get lost on a hike in the woods and end up trapped in the town of Schmigadoon, where everyone lives their life as if in a musical. The couple learn they cannot leave until they find true love.

No, not the movie from 1986 starring Harrison Ford based on the 1981 book of the same name by Paul Theroux. The story—a brilliant inventor and individualist flees the U.S. with his wife and two kids for a better life away from the consumerism and corruption that he feels has ruined the country—gets a reboot as a seven-episode series. This time, the destination is Mexico, and the FBI is on his tail. The series stars Justin Theroux, the novelist’s nephew, as Allie Fox who must dodge federal agents and a Mexican drug cartel to find refuge for his family. The story wasn’t all told in season 1 because a second season has been ordered.

As Halloween approaches, you can dig into this horror series from M. Night Shyamalan. The first two seasons are available with a third on the way about a wealthy couple in Philadelphia who attempt to repair their lives after losing their infant son, Jericho. How does one go about healing after such a tragedy? Well, this couple takes the lifelike doll route to help the mother recover from a psychotic break. But, wait, it gets weirder! They then hire a nanny to care for the lifelike doll version of Jericho. And guess what? Things get creepy quick.

Starring Hailee Steinfeld, this series tells the story of the 19th century poet in a modern, Riverdalesque tone. This biopic/teen drama is a fun way to learn about Emily Dickinson’ life in antebellum Amherst, Massachusetts. In this version, she hangs out with Wiz Khalifa, portraying Death who stops for the poet for midnight carriage rides, and an imaginary bee voiced by Jason Mantzoukas. You’ve got about two months to get through the first two seasons before the third and final season arrives in November.

A darling at Sundance, this documentary film follows a week-long program where more than 1,000 boys in their junior year in high school come together to practice their political and campaign skills. There are Boys State (and Girls State) programs in nearly every state that help teach students how local and state government operates, and this film follows the program in Texas. This may not sound like the most enthralling subject for a documentary, but the four real-life characters the film follows are captivating as they maneuver through the week to elect a governor of Boys State.

Another story about boys. Instead of 1,000 boys in Texas, this doc follows three boys from Brooklyn—Ad-Rock, Mike D, and the late MCA. Adam “Ad-Rock” Horovitz and Michael “Mike D” Diamond act as hosts in this “live documentary” directed, produced, and written by Spike Jonze.

Filmed at a packed theater in Brooklyn, the film features Yauch and Diamond reminiscing on stage about growing up in New York, meeting Adam “MCA” Yauch (who died in 2012), discovering Run-D.M.C., working with Rick Rubin, and their eventual burnout and rebirth—with plenty of video footage of their younger and wilder years breaking up the stage act.

1971: The Year that Music Changed Everything

If you like music documentaries, then you need to check out this docu-series. During a period of cultural, political, racial and sexual upheaval, new forms of music emerged as the peace-and-love 1960’s gave way to a new decade. Over eight episodes with incredible archival footage, you’ll hear from music icons including John Lennon, The Rolling Stones, Aretha Franklin, Bob Marley, Marvin Gaye, The Who, Joni Mitchell, Chrissie Hynde, Lou Reed, and David Bowie.

A Hollywood casualty of the pandemic, Greyhound had its theatrical release delayed and then ultimately canceled, after which Apple swooped in and acquired the distribution rights. Tom Hanks wrote the screenplay and stars as a U.S. Navy commander under attack from Nazi U-boats in the Battle of the Atlantic during World War II. Based on actual events, Hanks plays Commander Ernest Krause, who’s new to the job as the Americans have just entered the war.

Krause must escort a convoy of 37 ships across the Mid-Atlantic gap where they’re out of range of RAF support and very much in range of German submarines. You might think of Greyhound as a total Dad movie, and this WWII naval drama most certainly is, but it’s also a tight 90 minutes with Tom Hanks constantly on the screen. A short running time with lots of Hanks lends broader appeal beyond dads who read books about submarines.

Geek out on space rocks! Directed by Werner Herzog and British volcanologist Clive Oppenheimer, this film takes you on a journey around the world to explore meteorites and their physical impact on the planet and their influence on ancient religions and current civilizations.

How much does Apple TV+ cost?

Apple TV+ costs $4.99 a month, which is a fraction of the price of other streaming services. And you can spend even less by signing up for the annual plan for $49.99, or signing up for an Apple One subscription that bundles various Apple services into one (you can read more about Apple One at our sister site, Macworld). Finally, you can get a three-month free trial with the purchase of any Apple product that’s capable of streaming the service (Apple TV, iPhone, iPad, or Mac). Here again, you can get more information about the Apple TV+ free trial at Macworld.

How can I watch Apple TV+?

Apple TV+ is available on Apple devices, of course, but you can also watch it on your TV via Roku, Amazon Fire TV, Android TV, Google TV, PlayStation, and Xbox. You can also watch on smart TVs from LG, Samsung, Sony, and Vizio. On any Windows PC or ChromeOS or Android device, you can access Apple TV+ in the Chrome or Firefox browser.