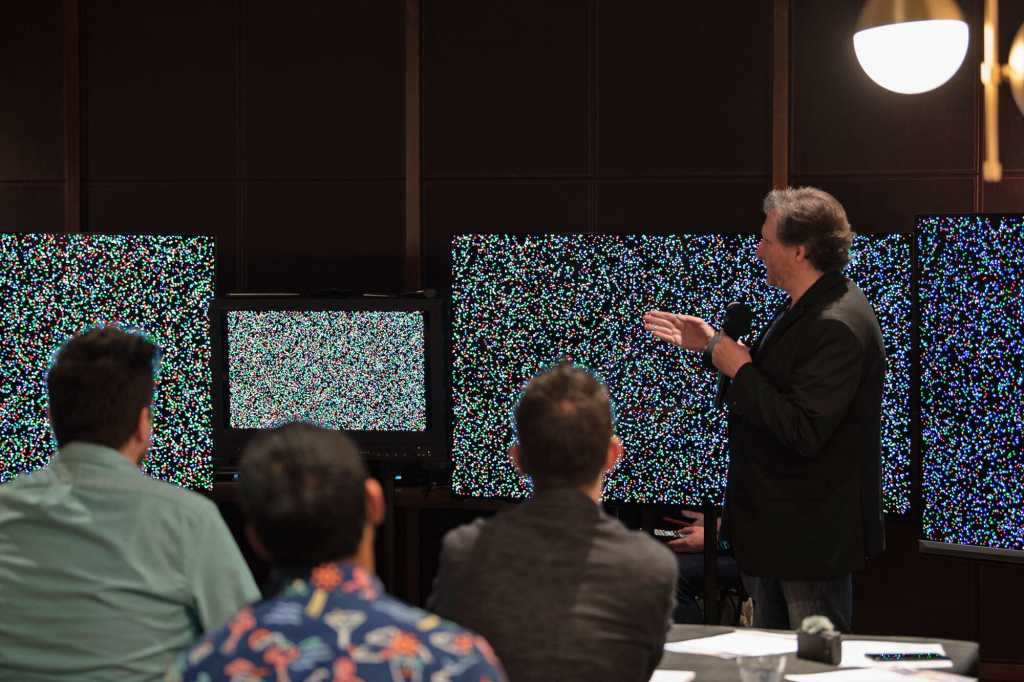 On Sunday and Monday, September 12 and 13, 2021, Scarsdale, NY retailer Value Electronics brought together calibrators, cinematographers, and other video professionals to evaluate flagship TVs and—for the first time, ultra short-throw (UST) projectors—to determine which model was the best of the best. I discussed the annual event in detail last week, including how the evaluations were carefully set up and provided links to the live stream of each day.

Before the shootout began, Stacey Spears, co-creator of the Benchmark series of test and evaluation discs, offered some opening remarks and explanations of the test patterns that would be used. In the photo at the top of this article, he’s explaining the break-in pattern on his latest disc, Ultra HD Benchmark, which exercises all the pixels of a 4K display equally. This is especially important to do for 100 hours or so before calibrating an OLED TV.

Calibrator John Reformato was quite impressed with Stacey’s presentation. “We got to see a lot of the test patterns and content from Stacey’s new disc, but it was a unique experience to be in the same room with him as he was showing and explaining everything.”

The King of 4K TVs

There were four contenders in the 4K TV category:

And the King of 4K TVs is (drum roll, please)… the Sony XR-65A90J OLED. As you can see in the final scoring—which was calculated by averaging the judges’ scores for each attribute—the 65A90J came out on top in all attributes of the SDR Day Mode and SDR Reference Mode tests. In the HDR Reference tests, it achieved the best score in four out of seven attributes, and it tied with the LG 77G1 OLED for the best score in another. The 77G1 just barely squeaked out the top score for color accuracy/skin tones and had a more comfortable lead in 4,000-nit tone mapping.

Presenter Stacey Spears gave me three examples where the LG fell short. First of all, it had relatively poor uniformity compared with the Sony. Also, there was visible dither noise near black. Finally, in a shot of the Space Needle in Seattle, WA, the image on the LG was softer than on the Sony due to some sort of filtering.

The King of 8K TVs

There were three contestants in the 8K TV category:

In this case, the TVs were evaluated with no ambient light, and the judges were tasked with assigning numerical scores in only four attributes:

As you might guess, the first three attributes were based on 4K content, while the last one used native-8K footage provided by cinematographer Phil Holland. The 8K content was played from a USB drive, but unfortunately, the Sony can only play 8K via HDMI, not USB. So, that attribute was not considered in the final determination; it was for exhibition only on the LG and Samsung.

The winner in this case was no surprise to me: the LG 77ZX OLED. As the average scoring clearly indicates, it easily won two out of the three 4K attributes, coming in second to the Sony’s 4K upscaling. Of course, it costs three to four times as much as the other two sets, and it’s the only OLED in the group.

Once the Kings of 4K and 8K TVs were crowned, it was time to put them next to each other and feed them 4K and 8K content to see what the difference between them, if any, might be. Using Phil Holland’s footage in both 4K (upconverted to 8K for the 77ZX) and 8K (downconverted to 4K for the 65A90J), everyone agreed that the 8K image was clearly better, even at a distance of five or six feet. According to Stacey Spears, calibrator John Reformato had been an 8K skeptic until he saw this demo, which turned him into an 8K advocate.

The King of ultra short-throw projectors

On Monday, the judges turned their attention to three ultra short-throw (UST) projectors:

Since UST projectors are marketed as “TV replacements,” the judging was performed in three modes, much like the 4K TVs:

The Hisense comes with its own screen, while the LG and Samsung do not. Even so, after some discussion, the team decided to evaluate all three projectors on the same UST ALR screen material from Draper, each one measuring 98 inches diagonally with an aspect ratio of 16:9. This put them all on the same playing field, so to speak, but it does not represent what most buyers of the Hisense will experience if they use its included screen. I might have recommended that the comparison include two Hisense projectors, one using its own screen and the other using a Draper screen—if not in the main shootout, at least in a separate viewing.

John Reformato was thrilled with the whole event. “Now that the TV Shootout is over, I want to say how incredible it was to work with people such as Stacey Spears, Phil Holland, Dave Mackenzie, Jason Dustal, Tyler Pruitt, and the rest of the incredibly talented crew. The test patterns and content that Stacey, Phil, and Tyler brought really showed the differences in the displays. A great TV Shootout this year!”

So, there you have it; the 2021 Value Electronics TV Shootout is now in the history books. I commend store owner Robert Zohn, calibrators Jason Dustall and John Reformato, presenters Stacey Spears and Rob Sabin, and all the judges for pulling off such an ambitious event. Bravo!