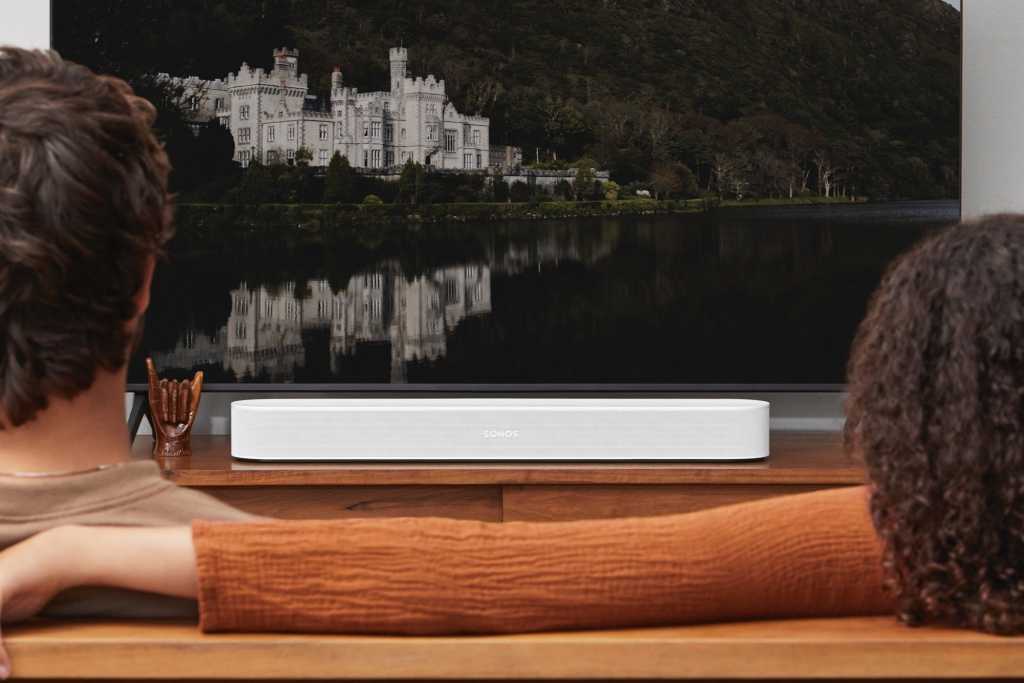 Sonos has been slowly upgrading its soundbars, replacing the aging Playbar with last summer’s high-end, Dolby Atmos-enabled Sonos Arc. Now comes a redo of the four-year old Beam, a smaller, more affordable soundbar that can now deliver immersive audio similar to its bigger sibling, and it adds HDMI eARC connectivity to boot.

Slated to ship October 5 for $449 (you can pre-order it now on Sonos.com), the second-generation Beam arrives at a $50 premium compared to its predecessor.

Measuring 25.63 x 3.94 x 2.72 inches (WxDxH) and weighing in at 6.2 pounds, the second-gen Beam is almost precisely the same size and weight as the original (the new Beam is a hair longer than the first-gen version), but the wraparound mesh fabric on the first Beam has been replaced with a perforated, easy-to-clean polycarbonate grille, similar to the Arc.

Inside the Beam, the driver setup is more or less the same as before. You get four elliptical midwoofers (two front-firing and two angled), a tweeter for the center channel, and three passive radiators for low-frequency effects. Each driver is powered by its own discrete class-D amplifier.

The big internal change in the second-gen Beam is a new processor, which Sonos says is 40 percent faster than the CPU in the original. Thanks to its added processing power, the new Beam can squeeze virtualized Dolby Atmos height cues (using Dolby’s height-virtualization technology, which tricks your ears into thinking they hear sounds from above) using the same five-driver configuration as the original Beam.

Of course, the second-generation Beam isn’t the first Dolby Atmos soundbar to deliver height effects without upfiring drivers that bounce sound off your ceiling (as the Arc does); we’ve recently reviewed soundbars from Vizio and Sony that perform the same trick. The key, of course, is the execution; some soundbars with virtualized Dolby Atmos audio sound surprisingly natural, while others are distractingly hissy. We’re expecting to receive a review unit soon, so we’ll be giving you the scoop on the Beam’s real-world performance.

If you wish, you can turn the Beam into a proper 5.1.2-channel soundbar by adding the Sonos Sub and a pair of Sonos Ones (which would act as surround speakers). But given that the Sub costs $750 and each Sonos One goes for $220 (following a series of recent price increases), you’d be looking at a total of $1,640 for the whole package—ouch.

In the rear of the revamped beam is a fast (10/100) ethernet port, along with a single HDMI-ARC connector that supports eARC (you can read more about ARC and eARC here). Thanks to eARC, the Beam can handle lossless DTS-HD Master Audio and Dolby TrueHD audio formats, which are commonly found on Blu-ray discs. As with the Arc, however, there are no additional HDMI inputs for connecting video sources directly to the soundbar; instead, you’ll need to connect sources to your TV’s HDMI inputs, and then pipe the audio down to the Beam via ARC/eARC.

One bone of contention about the Sonos Arc was that when it initially shipped, it didn’t support multichannel LPCM audio, which was a big issue for Apple TV 4K users since Apple’s streaming box delivers Dolby Atmos via LPCM. A firmware update eventually fixed that problem, and happily, I’m told that the 2nd-gen Beam will ship with LPCM support.

There was also some grumbling about the Arc’s lack of an on-board DTS audio decoder, and while the Beam won’t initially ship with one either, both it and the Arc will be getting DTS decoding later this year via a firmware update.

As with its predecessor, the new Beam has a far-field microphone array for voice control, and as with Sonos’s other S2-class speakers, you can install either onboard Alexa or Google Assistant (but not both at the same time).

Another standard Sonos feature that the new Beam supports is Trueplay, Sonos’s room-correction technology that uses an iPhone’s microphone to detect the acoustics of a room and shape the speaker’s performance accordingly.

You’ll be able to tweak the Beam’s audio using EQ settings, while additional features will let you boost the sound of dialogue as well as compress the dynamic range for late-night listening sessions.

Of course, you’ll also be able to connect the Beam to other Sonos speakers in your home via Sonos’ own wireless audio platform.

Stay tuned for our full review of the Sonos Beam in the coming weeks.

Be sure to read Sonos’s other big announcement today: Sonos speakers to support hi-res Amazon Music streaming, along with Dolby Atmos Music