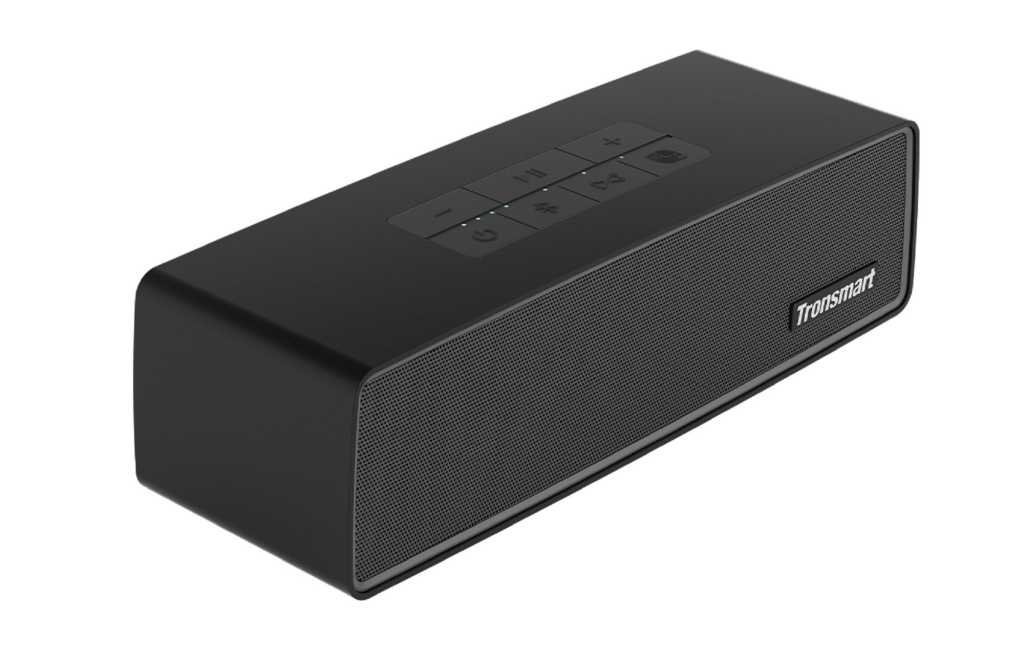 Tronsmart
At a Glance

This surprisingly loud and sonorous desktop Bluetooth speaker is sturdily built, compact, and has all the standard features you need. There’s even an SD card slot for direct playback and an app with numerous EQ presets, including a startlingly effective 3D mode.

If you’re looking for a small, good-sounding speaker for your desk or nightstand, you could do a lot worse than the Tronsmart Studio. This Bluetooth model delivers a surprising amount of thump, and it’s faux 3D sound is far better than you’d expect from a $70 speaker.

For a unit that measures only 8.13 x 2.28 x 2.76 inches (WxHxD), including a large rubber base, the Tronsmart Studio is surprisingly hefty at around two pounds. That usually bespeaks quality construction, and I like it.

I also like the rounded, slant-edge rectangular styling. The Studio seemingly borrows style cues from another decade—in a pleasant way. The large Tronsmart label is understandable, if just a tad large and—to be honest—unfortunate. Come up with a snazzy logo, guys.

The Studio features two small (approximately 2-inch) full-range speakers and a lot of porting. When looking through the front grill, you can see through the porting traveling the depth of the speaker. There’s 30 watts total from the unit, so I’m figuring 15 watts per speaker, which is quite a bit for a Bluetooth speaker this small. There are two 2600mAH batteries on board for a claimed 15-hour run time.

The Bluetooth is 5.0, there’s a 3.5mm auxiliary audio input, a USB-C port for charging, and get this—a genuine microSD card slot for direct playback. I’ve only seen these slots on audio units intended for use in conjunction with automobile stereos, and it’s a handy way to create your own library without involving your phone or computer.

The controls are dead center on top of the speaker, and consist of volume minus/previous-track, play/pause, volume plus/next-track, power, Bluetooth pairing, broadcast (multiple speaker broadcast), and the SoundPulse (deepen/EQ) effect. Tronsmart claims linking with up to 100 additional speakers but there’s no stereo pairing of just two.

There’s also an app (shown below) that allows you to apply various EQ presets.

Disappointingly, I could find no custom EQ, though there’s a preset that’s suitable for just about every taste and genre. The 3D setting in particular impressed the heck out of me, and I largely stuck with it for my listening sessions once I tried it.

That said, I was surprised at the depth of the Studio’s sound. When I chose the 3D EQ preset, as mentioned, my ears perked up. I was not prepared for how spacious the effect would be, and how it avoids the artifacts that sometimes plagues this technology. Up until this mode, I was lukewarm on the overall sound. Not great, but not bad; and there was no user EQ setting I could tweak to taste. After using 3D mode, I found myself using the Studio far beyond it’s test period. I’m still using it. Run time for me was around 8 hours playback and a week-and-a half of downtime with 30 percent battery life left.

While the Studio might not be the best-sounding speaker I’ve heard, it’s very good for the price, and it pumps out far more low-end and volume than one has any right to expect at this price.

The Tronsmart Studio is my new favorite in the small desktop category. Largely because of the marvelous 3D effect, though the bass and volume are factors as well. For $70 it’s a bargain.