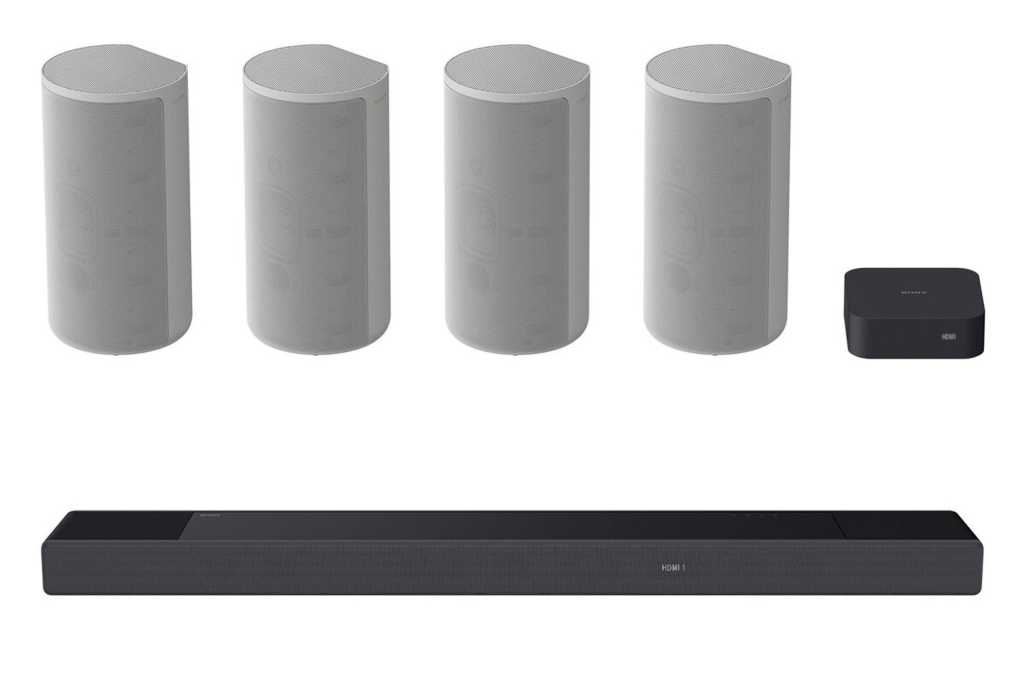 Sony is one of more than 100 companies that—due to COVID concerns—pulled out of exhibiting at the CEDIA (Custom Electronics Design and Installation Association) Expo happening this week in Indianapolis, IN. Instead, the company presented a series of live online presentations to show custom installers what they would have seen at the show.

Among the few products that had not been previously announced were two home-theater sound systems that caught my attention. The HT-A7000 is Sony’s new flagship soundbar that purports to provide 7.1.2 immersive audio with five front drivers, two beam tweeters that bounce the surround channels off the side walls, two upfiring speakers that bounce the overhead channels from the ceiling, and two front-facing low-frequency drivers. You can also add optional rear-surround speakers and a 200W or 300W subwoofer.

Even more interesting is the HT-A9, a package with four identical, wireless, powered speakers and a control unit. Each truncated-cylindrical speaker has a front-facing woofer and tweeter as well as an upfiring driver, and the included control box enables what Sony calls 360 Spatial Sound Mapping that creates up to 12 phantom speakers. This allows the system to play music in the company’s 360 Reality Audio format. And like the HT-A7000, you can add an optional subwoofer.

Both systems include sound-field optimization that compensates for imperfect placement of the speakers using built-in microphones and sophisticated DSP algorithms. In addition, the HT-A7000 and HT-A9 can connect to certain Sony TVs (models Z9J, X95J, A90J, A80J) with a feature called Acoustic Center Sync. In this configuration, the TV enhances the center channel, causing the dialog to appear to be coming from the screen itself.

As you might expect, both systems can accept audio via Bluetooth and Wi-Fi streaming, they support Apple AirPlay 2 and Spotify Connect, and they include Chromecast built-in. Also, they are compatible with Google Assistant and Amazon Alexa voice control.