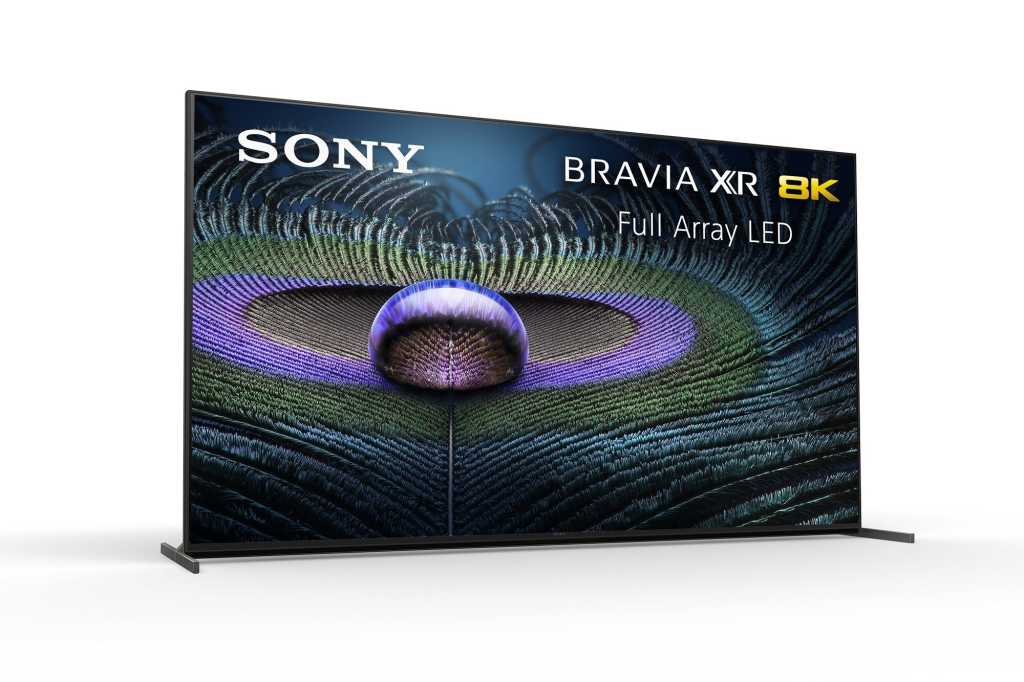 Sony
At a Glance

Sony’s Z9J is a great 8K UHD TV, and it’s one best-sounding TVs on the market. But its upscaling isn’t as good as the competition, and its current absence of support for 8K video files and 8K YouTube streams is puzzling.

Sony’s Bravia Master Series Z9J 8K TV delivers very good image quality, great looks, and fantastic audio features and performance. It’s pricey—and them some, at $7,000—but the bigger issue is that it won’t play 8K video files, either from local USB media or via YouTube. And Sony declined to promise us that it will down the road.

You’ll likely need a burly friend or two to set up the 75-inch-class model Sony sent for this review—its shipping weight is a whopping 130 pounds. As shown below, Sony illustrates three folks handling the job in Its setup guide.

You might be able to manage setting it up by sliding, leveraging, tilting, leaning, and propping (I did—but it wasn’t easy) but why risk it? The Z9J is also rather thick at just over three inches, but that’s largely due to its audio infrastructure—more on that in a bit.

The Z9J is an 8K UHD (7680 x 4320) display with a 120Hz refresh rate, and it uses Sony’s proprietary technologies for color and brightness. There’s a full-array backlight with somewhere around 400 fully dimmable backlight zones, if the zone counters (videos of small white blocks that travel the edges of the display) are to be believed.

Heavy the Z9J may be, but Sony has designed a very clever three-position stand to make sure it remains stable on whatever surface you set it on.

Using different mounting points, you can orient the legs to the sides, so the bottom of the TV rests flush against the supporting surface; place them near the sides, but angled to raise the unit off the supporting surface; or further toward the center of the TV to accommodate narrower platforms. The illustration to the left illustrates your options. The TV can also be mounted to the wall.

There are four HDMI ports, one of which supports eARC audio output, and another that supports high-bandwidth 4K UHD/120Hz and 8K UHD/60Hz signals. Two of the HDMI ports support HDMI-CEC as well. Variable refresh rate and auto low-latency mode are also featured.

Audio is also output via an optical jack on the back and a 3.5 mm headphone jack on the side of the TV. Unique to Sony is a two-wire output for a center speaker.

Other ports include coaxial for cable and over-the-air antennas, a 3.5mm RS-232C jack for system integration (marrying external audio to the TV controls), and an RJ-45 port for ethernet connections. Wi-Fi connectivity is 802.11ac, and there’s low-latency Bluetooth on board.

Swinging back to the subject of audio, the Z9J sports a whopping seven drivers: four tweeters, two-midrange, and a single subwoofer. I refer to them as drivers, but they actually vibrate the display glass, essentially turning it into a giant planar speaker.

The Z9J also supports DTS Digital Surround, Dolby Audio, and Dolby Atmos, which means support for legacy codecs from those vendors as well. As if that weren’t enough, there’s an acoustic auto calibration routine that will adapt the speakers’ output to the TV’s surroundings.

Calibration makes a noticeable—and mostly good—difference, but you can retreat to the defaults or rerun the setup at any time. Finally, the Z9J will “upscale” normal audio to faux 3D surround. Yes, Sony has its audio chops together.

The Z9J uses the Android TV operating system, which is much improved from the crash fest of a few years ago. If you’re willing to live in Google’s world, you’ll like the interface.

Android TV is easy to browse, and it has all those Android features and apps that occupy Google’s enormous ecosystem. Sony also provides a comprehensive channel guide that makes it easy to surf content.

The included remote is the revamped model we first saw with last year’s models, and most recently, the A90J. It’s big enough you won’t need to worry that it will get lost in the couch cushions; it rests comfortably in the hand; and functionally, it marries well with the TV’s onscreen interface. That’s my roundabout way of saying I like it—I don’t like it as much as the Roku remote, but…

My only minor complaint with the remote is that its four-way rocker/okay button is a bit more difficult to navigate by feel than some others—the outside isn’t raised enough for my tastes, and I had to fumble to navigate at times. Regardless, this new remote is far better than the antiquated remote that Sony shipped with even its top-of-the-line TVs just short while ago. Those controllers weren’t good enough for a cheap hotel room.

Make no mistake, the Z9J delivers the Sony image that fans are looking for. The color is accurate, though not quite as true as that delivered by quantum dots. But the image invokes that classy vibe that’s part of the Sony aesthetic. You can’t make the color more accurate, but you can adjust it to taste with an array of tweaks.

Processing was very good, though by default the Z9J seems to opt for a little less default sharpness than most brands. Increasing said sharpness will induce slightly more noticeable artifacts such as moiré, but only slightly.

As mentioned earlier, zone counters revealed somewhere around 400 to 440 backlighting zones, and dimming was handled exceptionally well. You can barely see the transition adjacent zones dim and brighten. There’s only mild blooming at worst, and the Vegas night skyline in Sony’s own contrast video demo is handled as well as I’ve seen with any LCD TV, barring the mini-LED backlighting used in some of TCL’s and Samsung’s latest.

The Z9J breezed through the Spears & Munsil tests, with the exception of the pyramidal fine-line test patterns; those showed more than the usual amount of distortion. That said, the converging lines in that test are exceedingly rare in real world material and no TV handles them perfectly.

Motion smoothing was excellent, though not quite on par with the recently reviewed and vastly improved Vizio P-Series. Screen uniformity was also excellent, as was viewing from steep angles.

Audio was nothing less than fantastic, for a TV at any rate. Those seven speakers and Sony’s various tricks make the Z9J one of the few sets that can hold its own with soundbars and the like. If you’re looking to minimize your entertainment setup’s footprint, that’s no small consideration.

Things got sticky only when I switched to 8K UHD material. Though the YouTube app is up to date, the Z9J apparently doesn’t support the AV1 codec that is required for bona fide 8K UHD playback—the resolution options top out at 2160p rather than 4320p. Strike one.

Additionally, Sony’s onboard media player can’t play 8K UHD files, meaning the HEVC movies I use for testing other 8K UHD TVs were useless. Strike two. Whether these shortfalls are hardware limitations or the fault of the Android OS wasn’t clear; curiously, Sony would not supply an explanation. See below.

The media player displays 8K UHD images, so I had to content myself with those for my initial evaluation. Said 8K UHD images were sharp and had that 8K look. After this article published, I acquired a laptop capable of 8K delivery and I used this to play Phil Holland’s 12K NYC overview, as well as several other 8K UHD videos.

The Z9J can indeed render 8K nicely. Detail isn’t quite as pronounced as with Samsung’s 8K UHD TVs, but it’s definitely an noticeable uptick from 4K UHD. Note that you must specifically enable 8K on the 4th HDMI port, or you’ll only see 4K UHD.

Sony does largely deliver on the hype about XR upscaling of less-than-8K UHD content. It works to some degree with most material, although it occasionally induced mild artifacts as well. In general, I wasn’t as impressed as I was with the upscaling I witnessed from Samsung’s Q900 two years back, but Sony’s upscaling does make most 4K UHD look better.

Asked for comment on the future of 8K UHD playback via anything other than the HDMI port, Sony replied “We are working with our streaming partners as they develop 8K content and its delivery and will continue to evaluate how to provide the best experience to our customers.”

That comment inspired less tha total confidence on my part as to the Z9J’s 8K UHD future, so I asked them flat out if the Z9J was capable of HEVC and AV1 playback should the company choose to implement it. The reply was “We are not able to discuss our 8K processing strategy at this time.” I also to contacted Google about Android TV’s 8K UHD abilities, but have yet to get a response. Rest assured, we’ll update this article if further information is made available.

The Z9J is an excellent TV with 4K UHD that any fan of the Sony brand would love to have in their living room. But if you’re prepared to part with this kind of coin get 8K UHD, I’d wager you’d like to watch some of it—even if it’s simply a YouTube aerial tour, or something you download from NASA. With the Z9J you can’t, and Sony is curiously mum as to whether you’ll be able to down the road.

You can do all that today with Samsung’s Q900, which rocked in my earlier review, as well as that company’s newer QN900 and QN800, although I’ve yet to review either of those latter models. But I’ve never known Samsung to backslide on image quality.

This article was edited on 9/30/2021 to reflect further experience with 8K UHD video delivered via HDMI.