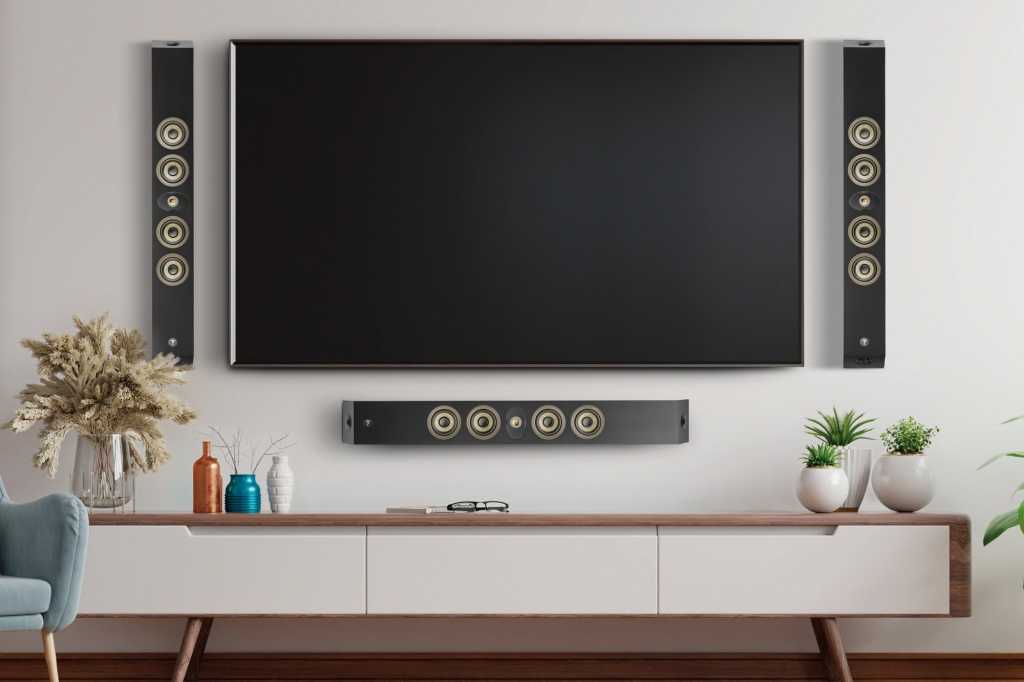 Modern big-screen TVs look great mounted on the wall, but many believe that placing bulky tower loudspeakers—or even large bookshelf models—next to one spoils a home theater’s visual aesthetic.

But how else can one achieve a high-fidelity sonic experience to match the visual splendor that a great TV can deliver? You could buy speakers designed to fit inside the wall, but you’ll need to pay a custom installer a boatload of cash to handle that job, or—an even pricier prospect—build you a home theater from scratch. French speaker manufacturer Focal says it has the perfect and less-expensive alternative: Mount its ultra-thin On Wall 300-series speakers on the wall.

There are two models in the series: the On Wall 301 (shown below) and the larger On Wall 302 (presented at the top of this story). The speakers in both series measure just over 3.5 inches deep, so they’ll stick out just a wee bit from your TV’s screen. You can purchase a third unit to deploy as a center channel oriented horizontally beneath your TV. Focal says the On Wall 301 is perfect for up to 60-inch televisions, while the On Wall 302 will look good next to larger sets. They’re available with either a satin black or gloss white finish.

For surround channels, you could deploy additional On Wall speakers—either mounted on the wall (the hardware for that is included) or on Focal’s optional stands. If you’re looking for the full home theater cinema effect with speakers that can reproduce the height cues in Dolby Atmos or DTS:X movie soundtracks, Focal suggests installing its new 300 Series in-wall speakers in the ceiling.

The On Wall 301 is configured with a pair of 4-inch mid-bass drivers mounted on either side of a 1-inch aluminum/magnesium tweeter. The enclosure is a bass-reflex design with ports at either end of the cabinets, which measure 31.5 x 6.125 x 3.562 inches (HxWxD when oriented vertically, so a speaker installed as a center channel would be 6.125 inches high). The speakers offer frequency response of 53Hz – 28kHz (+/- 3dB), with crossover occurring at 2,500Hz.  Focal recommends these 8-ohm (nominal) speakers be driven with an amplifier ranging from 25 to 130 watts (minimum impedance is 5.5 ohms).

The larger On Wall 302 features four of the same mid-bass drivers, with two placed on either side of a 1-inch aluminum/magnesium tweeter, once again in a bass-reflex cabinet with ports on either end cap. The taller On Wall 302 measures 49.187 high when mounted vertically, but its other dimensions are the same as the smaller series. Its frequency response, crossover, and nominal impedance specs are likewise the same as the smaller speaker, but Focal recommends pairing it with an amplifier capable of delivering 40 to 180 watts. Focal manufactures its drivers in France.

The On Wall 301 tips the scales at 13 pounds with its magnetic grill in place, while the On Wall 302 weighs 26.45 pounds. As mentioned earlier, all the hardware needed to mount the On Wall speakers comes in the box, and Focal says the job is easy to do and easy to adjust afterward. For those situations where wall mounting is just not possible, the company offers optional stands priced at $490 a pair. (We’re assuming a horizontally oriented speaker deployed as a center channel must either be mounted on the wall or rested in front of and on the same surface as the TV—or perhaps you can use two stands).

Focal’s On Wall speakers will be available in the U.S. in September. You can find out more about them on Focal’s website.