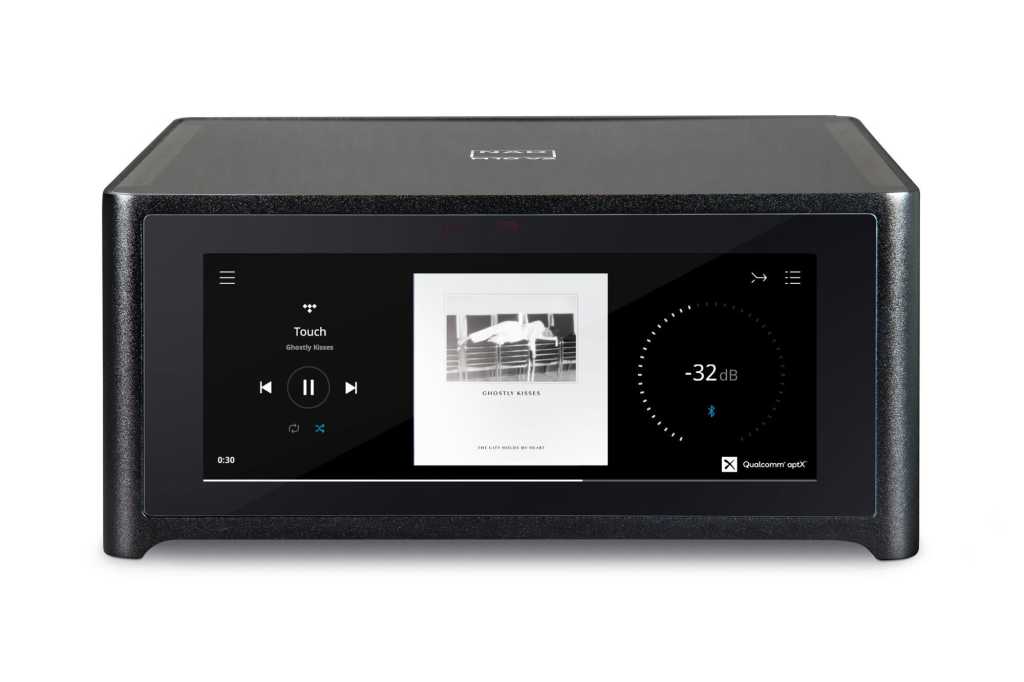 Canadian high-end audio stalwart NAD recently announced the second generation of its M10 streaming amplifier, which was first introduced more than two years ago. Continuing the company’s “just add speakers” approach, the M10 V2 features two channels of NAD’s Hybrid Digital nCore amplification, each providing continuous power of 100 watts into 8 or 4 ohms and dynamic power up to 160W into 8 ohms and 300W into 4 ohms with a frequency response from 20 Hz to 20 kHz (±0.6 dB0 and THD less than 0.03% (full bandwidth up to 100W).

New features in the V2 include updated gain algorithms and Dolby Digital 4.0, 4.1, and 4.1 surround sound with Dolby Digital decoding. The M10 powers the front stereo speakers and provides two line-level subwoofer outputs, which have increased gain in the V2, while surround signals are sent via NAD’s BluOS wireless system.

For example, you could use a Bluesound PowerNode to power any passive speakers you want in the surround positions. Alternatively, you could use a BluOS-enabled, powered speaker like the Bluesound Pulse Flex 2i without needing a PowerNode. (Unfortunately, I don’t recommend that; you can read my Pulse Flex 2i review at this link. There’s even an enhanced-stereo mode that expands stereo signals into the surround speakers.

The primary audio source is the built-in streaming engine, which offers a wide variety of premium providers supported in the BluOS app, including Amazon, Spotify, Tidal, Qobuz, TuneIn, Napster, Deezer, and many others. The M10 V2 can accept online streaming content via gigabit ethernet or Wi-Fi 802.11ac, and the unit supports AirPlay 2, Spotify Connect, and Tidal Connect. The new model is also Roon ready, and BluOS supports multi-room audio.

Other avenues for feeding audio signals to the M10 V2 include Bluetooth 5, with support for two-way aptX HD and NFC pairing. Physical inputs include HDMI eARC, USB A, coax and optical digital audio, and stereo line-level analog audio.

Equipped with a 32-bit/384 kHz ESS Sabre DAC, the M10 V2 accepts high-res audio up to 24/192 and all major digital-audio formats, including WAV, FLAC, AIFF, ALAC, AAC, MP3, Ogg Vorbis, and others. It also offers MQA decoding and rendering. If you want to play DSD files, they must be converted to PCM in the BluOS desktop app. Finally, the superb Dirac Live room correction compensates for any acoustic shortcomings in the environment.

Naturally, the M10 V2 can be fully controlled with the BluOS app, which is available for iOS, Android, macOS, Windows, Crestron, Control4, RTI, URC, Elan, Lutron, and iPort. In addition, the new version now comes with an IR remote control, and the full-color LCD touchscreen display has a wider viewing angle. For those who like to use voice control, it also has Amazon Alexa and Google Assistant skills.

As you might expect, such a premium device commands a premium price: The M10 V2 lists for $2,749. According to NAD, it will start shipping “within weeks” in North America. If you value high-quality audio streaming without the complexity of an AV receiver-based audio system, the NAD M10 V2 could be an attractive alternative.