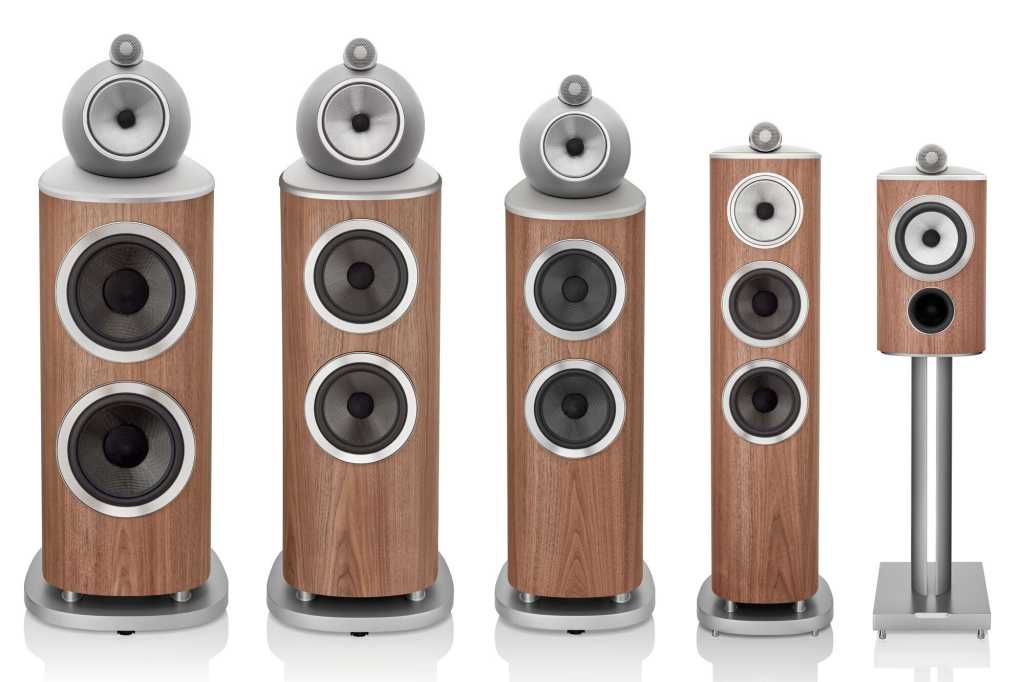 Aside from that, nearly everything else about the 800 Series D4 models has been updated. On the outside, the cabinet design includes a new cast-aluminum top section, replacing the previous wood, to provide even greater stiffness and thus cabinet quietness. In addition, all floorstanding models offer a downfacing bass port that fires onto a new aluminum plinth with a constrained-layer steel damping sheet that better controls unwanted resonances.

The iconic tweeter-on-top features a new, more elongated, tube-loaded enclosure milled from a single block of solid aluminum that is decoupled from the rest of the speaker in two locations rather than one. Also, the smaller 805 D4 and 804 D4 now sport the reverse-wrap cabinet that previously graced only the larger models. This reduces the profile of the front baffle while increasing the rigidity of the entire cabinet.

One of the most innovative improvements is found on the inside. Along with B&W’s composite Continuum Cone and Fixed Suspension Transducer (FST) surround technologies, the midrange driver uses an entirely new suspension system. Called the Biomimetic Suspension, it replaces the fabric spider with a minimalist skeleton that virtually eliminates unwanted sound waves that a conventional spider can generate, removing its unpredictable, non-linear effects. According to the company, the result is unprecedented midrange transparency and realism.

In addition, the midrange assembly is carefully isolated from the rest of the cabinet. In all 3-way models, the midrange modules include a highly stiff all-aluminum chassis with Tuned Mass Dampers (TMD) to quiet any resonance. And the modules are decoupled from the rest of the cabinet with spring-loaded mounts. The 803 D4, 802 D4, and 801 D4 go even farther by using an all-aluminum Turbine Head enclosure for their midrange drive units, which offers outstanding acoustic performance and even better isolation from the bass enclosure below.

Of course, the bass has not been ignored. B&W’s Aerofoil Cone is a composite bass driver with varying thickness designed to offer maximum stiffness where it is most needed while minimizing mass thanks to its carbon-fiber skin and syntactic foam core. Along with revised and optimized motor systems, the Aerofoil Cone is combined with a new foam anti-resonance plug that braces the voice coil and lowers distortion as the cone moves through its operating range.

The new 800 Series Diamond includes five stereo models and two center-channel speakers for home-theater applications. As you might expect, they don’t come cheap, but if history is any indication, the new speakers should sound spectacular.

Here’s the new lineup, pictured above from left to right. The 801 D4 replaces the 800 D3 as the flagship, and the first four models are floorstanders, while the 805 D4 is stand-mounted: