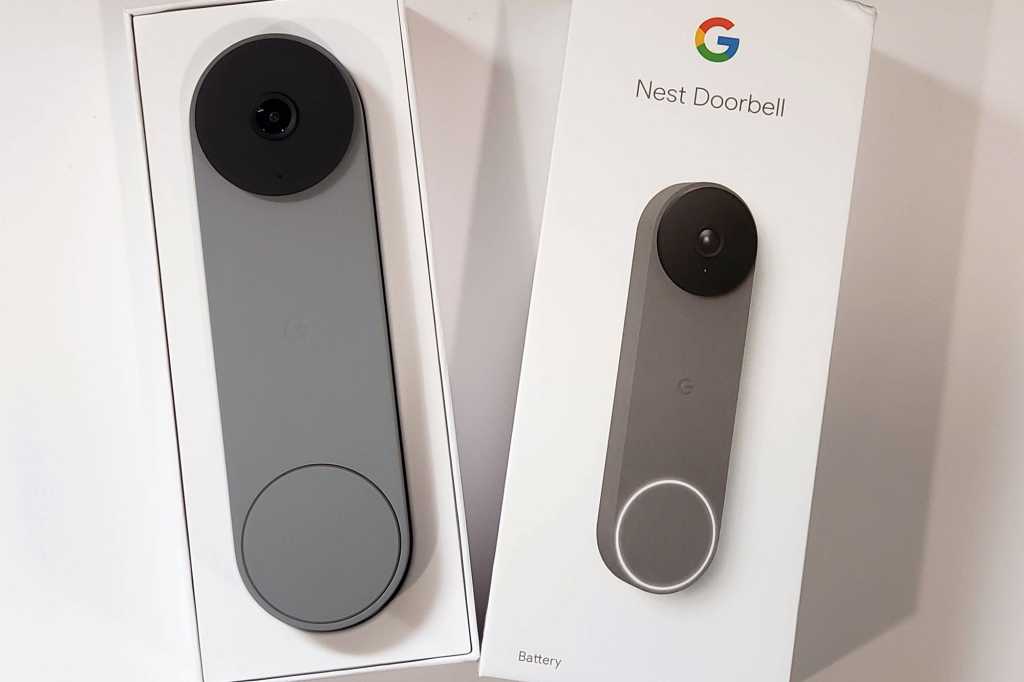 The Nest Video Doorbell (Battery) is one of the best video doorbells we’ve tested. It’s a solid product that’s easy to set up and accurate in use.

It’s been three years since Google launched the Nest Hello, a wired video doorbell with facial recognition that helped set the standard for smart doorbells. In that time, many competitors have appeared, but few have come close to the quality and reliability of that device. But now there’s a competitor.

The Nest Doorbell (Battery) is a Google-made video doorbell that can run on battery power (it can also operate on wired power, if you have that infrastructure and wish to connect it to your existing doorbell chime). In our tests the device performed excellently, didn’t give any problems, and proved itself to be a worthy sister device to the original Nest Hello. (As part of the launch of the new doorbell, the original Nest Hello has been renamed the Nest Doorbell (Wired).

A large, round black circle with a camera in its center is at the top of the new Nest doorbell. A small LED below that indicates when the camera is recording or processing video. A button equal in size to the camera circle is at the bottom of the doorbell, with a ring around it that glows when someone comes close.

The inclusion of a battery has made the new doorbell noticeably taller than the wired model—6.3 inches (160mm), versus 4.6 inches (117mm)—and it weighs nearly twice as much at 7.3 ounces (206g). But if you have the room to install it, these dimensions don’t matter too much.

Freed from the requirement to be wired (again, you can connect it to power if desired), the doorbell can be used on or nearly any door, whether doorbell wiring exists or not. The only infrastructure requirement is a Wi-Fi network (both 2.4- and 5GHz networks are supported).

It’s not just the battery that’s new. Three years on from the original doorbell, Nest has also been able to make use of technological advances.

One of the biggest changes is the shifting of image processing and recognition from the cloud to the camera. A machine-learning algorithm sits in the doorbell software and handles detection of several different classes of alert, and this has several advantages.

Among them is more accurate detection based on double the number of pixels and double the frame rate of the Nest Hello. Because the processing is done locally, alerts are also dispatched faster.

In use, I found the alerts accurate. Every time I walked outside, or someone came to my door, the camera correctly caught it and alerted me. When I arrived home or left in my car, I got an alert for a moving vehicle.

The doorbell can also give alerts for packages and animals. Unfortunately, the local deer, foxes and rabbits were a little shy during my testing period, so I couldn’t test that out. There are settings to adjust sensitivity, and you can set detection zones if something in the frame is constantly triggering unwanted alerts. Google says there is also a privacy benefit with the processing done locally, which is something to be commended.

The doorbell also works with the “familiar faces” feature in other Nest products and can tell you who it spotted if their face is already known and recognized. There’s also a setting to have alerts only sent when you are away from your home.

When someone comes to the door and presses the bell, the doorbell can trigger smartphone alerts, a Nest smart speaker, the Nest Hub and a traditional doorbell chime (if the doorbell is wired). Google smart devices will announce that someone’s at the door, and even name them if recognized.

On a smartphone and Nest Hub, you’ll see video from the doorbell and be able to have a two-way conversation with your caller if desired. There are also several preset responses that can be played to callers: “You can just leave it,” “We’ll be right there,” and “No one can come to the door” among them. Currently, these are available in Danish, German, English (Australia, U.K., U.S.), Spanish (Spain, Mexico), Finnish, French (Canada, France), Italian, Japanese, Norwegian, Dutch, and Swedish.

The doorbell captures portrait video at 960 x 1280 pixels at up to 30 frames per second. Night vision is available as well as HDR, which attempts to even out images so bright and dark areas are visible.

Video from the Nest Doorbell (Battery) is viewed right in the Google Home app. While there is a legacy Nest app, it can’t be used with this new product. Using Google Home makes for an easy and seamless experience, especially if you have other Google smart home products already set up and controlled this way. It also means that everything just works. All too often with competing products, good hardware is sometimes let down by poor software. That’s not the case here.

An indicator in the app shows the percentage of remaining battery life, as most similar apps do, but Google’s also gives an estimate of how long the battery will last based on how often it’s triggered and used. In my case, 95 percent battery translated to three months of use before needing to recharge.

There are a few major differences between Google’s old and new devices, and it’s worth understanding these if you are considering purchasing one or the other.

The biggest difference, besides the obvious power option, is the video quality and feed. On the older wired doorbell, the video is higher definition at 1600 x 1200 pixels, but it’s also in a landscape orientation. The battery-powered doorbell’s 960 x 1280 portrait orientation, while lower resolution, might give a better view of your porch or doorstep.

Also, video streams 24/7 from the older model to Nest’s servers, and all of it is available for playback—if you have a subscription. In that sense, the wired model is a little more like a security camera. The battery model does all its processing on camera and only sends clips to the cloud when motion is detected, so you won’t have a constant recording of everything.

The Nest Doorbell (Battery) is one of the best video doorbells I’ve tested, and it should be on your shortlist when considering which smart doorbell to buy. It worked flawlessly in my test and hasn’t given me any problems.

If you have other Google smart home devices or are planning to buy them, its usefulness multiplies. If you’ve standardized on Amazon Alexa, on the other hand, the Google product’s functionality suffers and you might be better off looking at one of the Ring video doorbells or something from another competitor.