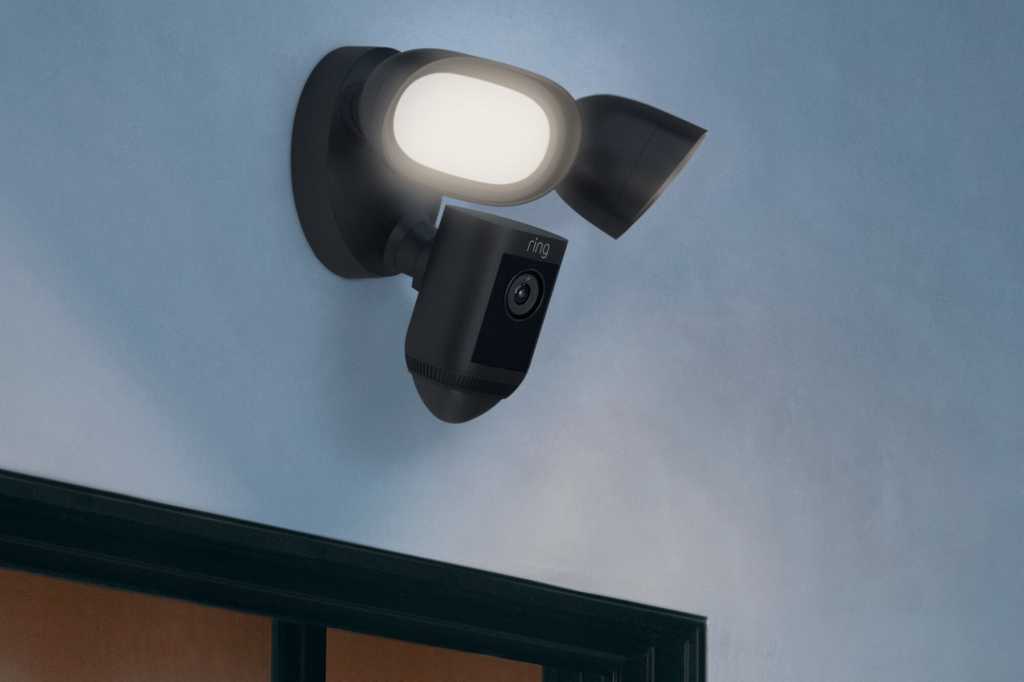 Attach two large floodlights to a Ring camera and you’ve got the Ring Floodlight Cam Wired Pro, a powerful, premium surveillance system that stands near the top of this market.

Don’t miss the word “Wired” in the product name. Like its predecessor, which we reviewed in September, 2019, this device must be permanently wired to an electrical receptacle via wire nuts (included) and mounted on the wall like a light fixture. If you’re replacing an existing floodlight, that may not be a big deal, but if you’re installing this from scratch, you might need engage an electrician.

Two 2,000-lumen floodlights that produce a relatively warm (3,000K) light dominate the device’s appearance. Each can be independently aimed by simply twisting the hinges that attach each light to the base. Between the two lights you’ll find the camera unit, a beefy Ring camera with a large motion sensor underneath the lens.

The camera features a 140-degree horizontal and 80-degree vertical field of view and 1080p resolution. Two-way audio is included, along with a 110dB siren that can be fired off on demand or if motion is detected when security settings are enabled. As a seamless part of the Ring ecosystem, you can easily tie alerts and actions to other Ring devices in your home. (As a side note, the unit is available in either black or white; consider white strongly, as the black unit I tested got quite hot sitting in the sun.)

Unlike most other Ring smart lighting devices, the Floodlight Cam Wired Pro does not require a Ring Bridge or other device to connect to your network. It connects to Wi-Fi directly—on either the 2.4GHz or 5GHz frequency bands—and  in my testing, the camera was up and running within a few minutes of following the intuitive setup instructions. (Installing the hardware is the more daunting part of the setup process.)

It doesn’t take much time using the Floodlight Cam Wired Pro to realize how incredibly powerful it is, starting with some of its impressive motion-detection features. The 3D Motion Detection with Bird’s Eye View feature is a game-changer. This feature lets you specify (via an overhead world map) exactly where your camera is placed and which way it is aimed. When motion is detected, recording begins, and the location of the motion is plotted on that overhead map, showing you exactly where it took place and tracking the movement over time. It’s powerful and informative—and in my testing, both quite sensitive and accurate.

The feature is aided by one of the most seamless playback interfaces I’ve seen to date in a camera system, letting you drag a 24/7 timeline of activity back and forth and scan through video in fast motion with no interruptions and no frustrating delays for buffering, although your mileage may vary based on the speed of your internet connection. When motion is detected, the scrubbing automatically slows down so you don’t accidentally skip past something important, then it speeds up again when all is quiet. This makes it incredibly fast and easy to find clips of interest, even over the course of multiple days, without the lengthy trial-and-error search process required by many competing services.

Note that you will need to pay a subscription to record anything (otherwise the camera can only be used for live viewing and two-way conversation). At a minimum, you need a Ring Protect Basic subscription ($3 per month), which includes 60 days of 24/7 recording history. Thirty days of the service are included for free and are automatically initiated when you first set up the device. That said, $3 per month is decidedly affordable compared to the rest of the market, although it covers only one camera. The $10-per-month Ring Protect Plus plan covers an unlimited number of cameras—including Ring’s video doorbells—and if you also own a Ring Alarm system, it includes 24/7 professional monitoring. That’s an even better deal if you have Ring’s security system and/or lots of other Ring cameras. 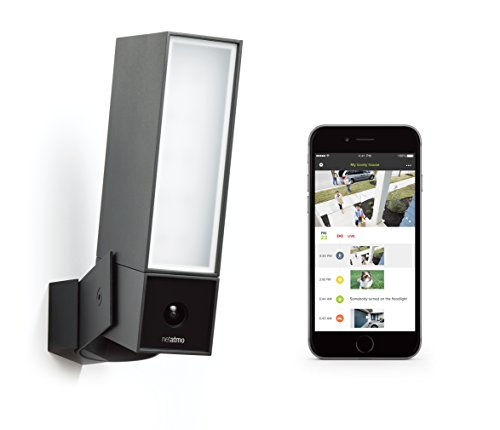 If you consider subscriptions anathema, one alternative to consider would be Netatmo’s Smart Outdoor Camera. It records encrypted video to an onboard microSD card and there is no cloud storage at all (you do have the option of connecting the camera to your Dropbox account or recording to an ftp server). When you want to review recordings, you connect to the camera over the internet. The industrial design of Netatmo’s camera is also more aesthetically pleasing; you wouldn’t even know it was a camera without a close look. On the downside, it’s even more expensive than Ring’s product and its motion-detection technology isn’t quite as sophisticated.

By default, Ring’s floodlights fire up when it detects motion and it’s dark outside, but this can be changed as needed, as the lights and camera can be scheduled independently. The lights can be set to always remain on during nighttime hours, for example, regardless of motion, or shut off altogether. The camera includes a color night vision mode that is surprisingly capable (though not all that colorful) even when the floodlights are turned off.

Video is crisp and clear in natural light, with spotlights activated, or in low light conditions—although I found the motion sensor that activates the spotlights to be less sensitive than the camera’s, causing it to frequently record in IR mode for a while before firing up the lights.

Finally, the system can be connected to Alexa (Echo smart speakers and displays), but note that there’s no support for Google Assistant or Apple’s HomeKit ecosystem.

At $250, the Ring Floodlight Cam Wired Pro definitely lives in an ultra-premium space , but it does a great job of proving it’s worth the outlay. If you want to save a few bucks, the $180 Ring Floodlight Cam Wired Plus is identical in design, but it lacks the 3D Motion Detection with Bird’s Eye View feature and supports only 2.4GHz Wi-Fi. I recommend shelling out the extra $70—along with one of the Ring Protect plans—and experiencing the premium option.