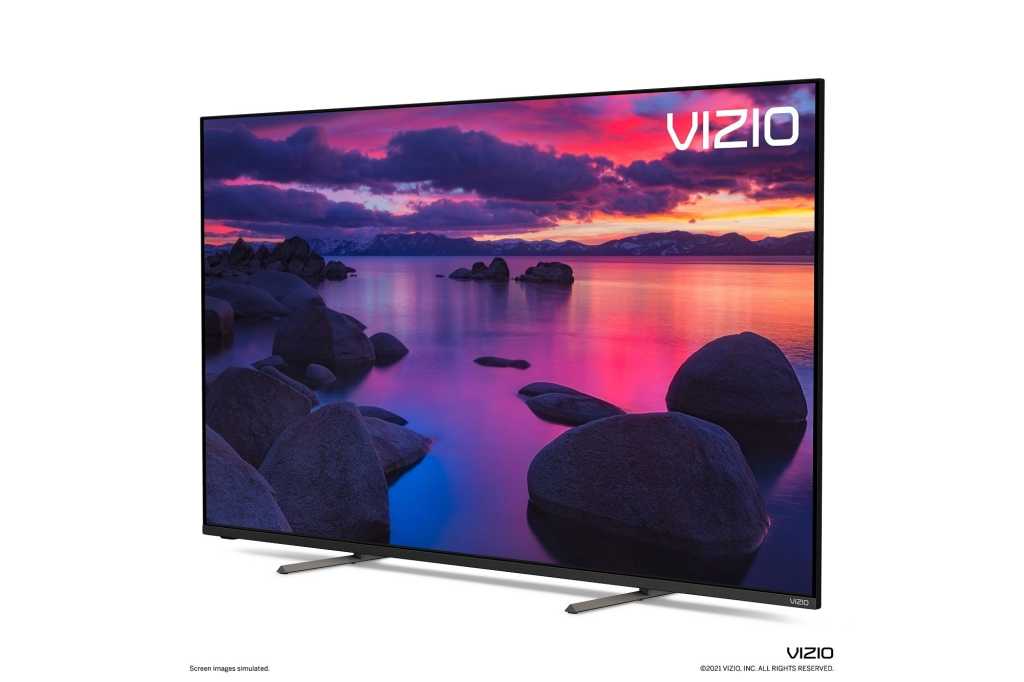 The P-Series are very good TVs—Vizio’s best. There’s tons of peak brightness for HDR, and the interface is super efficient. What’s new is top-notch video processing. This TV is right there with the best in its class.

Vizio’s P-Series TVs have historically featured outstandingly accurate color and excellent peak brightness. Video processing? Not so much. Yet, as the test process for the company’s new-for-2021 model P65Q9-J01 unfolded, it quickly became apparent that Vizio has finally, thankfully, honed its processing chops. It’s not only as good as its more expensive rival’s, in some cases it’s arguably better. Nice turnaround, Vizio.

The P65Q9-J01 reviewed here uses a 3840 x 2160, 120Hz, 10-bit panel with a layer of quantum dots for accurate color, and it produces approximately 1,100 nits of peak brightness. It has 144 dimmable backlighting zones, while the 75-incher features 210. All the TVs in the series support the most the common high dynamic range content: HDR10, HLG, HDR10+, and Dolby Vision.

The port selection (shown above) is state of the art, with four HDMI 2.1 ports, one supporting eARC, and two supporting 120Hz 4K UHD. Yup, you’re good to go with the latest gaming consoles.

There’s also ethernet, coaxial for cable and antennas, as well as both optical and analog (3.5 millimeter) audio output. The Wi-Fi is 802.11n and the Bluetooth is 5.0 with BLE. Vizio didn’t skimp on this TV. It also supports Dolby Digital, DTS, and DTS Virtual.

You can of course, control the TV with SmartCast’s own voice commands, or employ Google Assistant and Alexa with the relevant smart speaker. Apple’s HomeKit is also supported.

Vizio has invested a lot of time on its SmartCast user interface over the last couple of years—to good effect. It’s top dog when it comes to organizing content, and the only interface I know of that merges streaming and curated content into the channel guide. Most channel guides show only OTA (over-the-air) and/or curated content. Vizio, of course provides quite a bit of the latter.

The straightforward remote control is parsimonious with the buttons (forgetting the advertising shortcuts), but they synergize well with SmartCast and are multi-purpose; e.g., the rocker/enter cursor controls double as transport controls during playback. Also, you rarely need to dive deep into menus for the setting you want. Along with Roku, I find Vizio’s interface/remote tandem the most efficient. There’s also a microphone on board for the aforementioned voice-recognition facilities.

Vizio provides a companion SmartCast app for phones. I’ve always found it slow to respond, and prefer the dedicated remote, but it’s a very nice perquisite if you lose the latter and need to watch something now! Phone-centric users might even prefer the app. That’s what makes the world go around.

The P-Series claim to fame has been accurate color and a boatload of brightness. Video processing, on the other hand, has always been weaker than the competition’s: Anti-aliasing issues with text, excessive shimmer and moiré, and troubles drawing fine diagonal lines are just some of the annoying issues we’ve seen.

Gratefully, those issues are almost entirely absent in the P65Q9-J01. (Huzzah!) Not only that, this TV’s judder reduction was outstanding. The Spears & Munsil scrolling cherries and text were handled better than any other LCD 4K UHD I’ve seen. Most TVs display rather obvious glitches with this test.

The surprises continued with the backlighting, which exhibited a minimum of bleed and blossoming while maintaining a lot of brightness. I’ve seen several mini-LED TVs recently, and the P65Q9-J01 was actually competitive with them.

Screen uniformity was very good, viewing angles excellent, and glare was not an issue. There’s a new Black Detail function that helps contrast in very bright surroundings as well. Even the sound is decent. Of course a sound bar or some such would help, but you won’t need to rush into that auxiliary purchase for casual viewing.

In what I can only describe as an odd feeling (given Vizio’s recent record), I’m having a hard time remembering a 4k UHD LCD TV that’s gone through our testing with a better overall result. Sony, Samsung, LG, TCL…. Nope, can’t think of a one.

Caveat for USB media users: Vizio’s playback app won’t read the nearly storage devices formatted as the ubiquitous exFAT, only NTFS. Otherwise, said app is vastly improved from yesteryear. It enumerates files far faster (this might be due to the processor) and it doesn’t crash. Sony’s otherwise stellar A90J couldn’t lay claim to the latter.

The  P65Q9-J01 is a much better TV than its predecessors, more than competitive with its like-priced rivals, and light years beyond the company’s V- and M-Series. It features all the latest technologies, plus an excellent picture for the price. Before my hands-on, I had it penciled in for four stars. It reached 4.5 with ease. Good on ya’, Vizio.