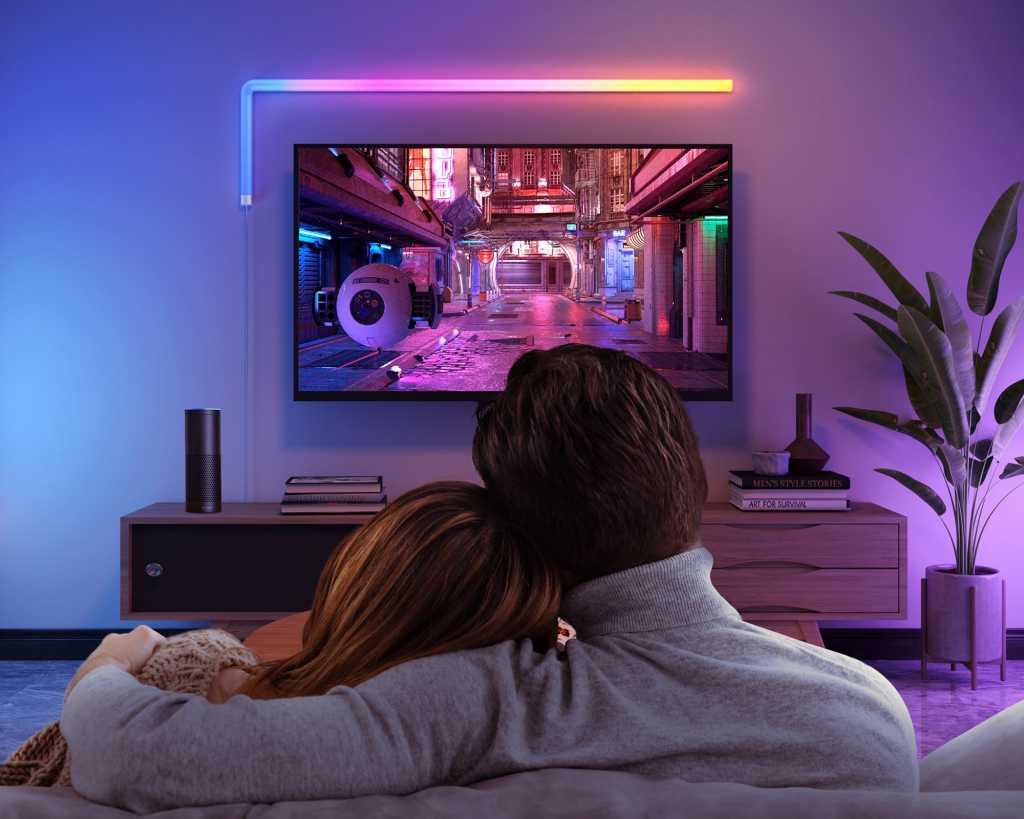 Image: Govee
At a Glance

Govee’s accent lighting options don’t stop at its fun Lyra Floor Lamp. Its lights can also be mounted to your wall in the form of the Govee Glide, a series of six-foot-long tubes containing a total of 57 independent color LED zones. The translucent, plastic tubes snap together easily and can be oriented as a single six-foot-long bar or arranged with one 90-degree bend in the middle, if you install the optional corner piece somewhere along the way.

If this sounds familiar, it’s because you’ve probably been reading about smart lighting for years here at TechHive. The product is nearly identical to the LIFX Beam system, which even includes a single corner unit along with its six rectangular tubes. LIFX’s light bars are a bit thicker (and its system offers 61 color zones instead of Govee’s 57); otherwise, you’ll find the two experiences remarkably similar.

Unlike the somewhat cumbersome Govee Lyra, the Glide is easy to assemble without any tools required. A small breakout box attaches to one end, and from there it plugs into an electrical outlet. Adhesive strips on the reverse of the light bars allow it to be mounted semi-permanently to the wall.

Once installed, the system is set up and managed identically to the Lyra. The Govee Home app connects the light bar to your Wi-Fi network (2.4GHz only) and promptly gives you a zillion ways to configure the lighting effects, ranging from static colors to dozens of animated scene modes to six preconfigured music modes that let the lighting effects bounce around in time with ambient audio.

The Glide is also split within the app into 18 zones, which can be configured individually—you can literally put a different color and a different brightness in each of them—though it’s much easier to let some of Govee’s preconfigured options do the heavy lifting. The Govee Home app isn’t the simplest to use, but you can muddle your way through most configuration efforts with only a modicum of trial and error.

The Glide lacks a remote control like the Lyra has, but it does keep all the other features, including a scheduling system, wake and sleep modes, and the ability to connect the system to Alexa or Google Assistant. At $100—$50 less than the LIFX Beam at present—it isn’t an overly expensive way to add a pop of color to any wall in the house. While you’re limited to a long line or an L shape, it turns out that’s enough to liven up a wide range of environments.