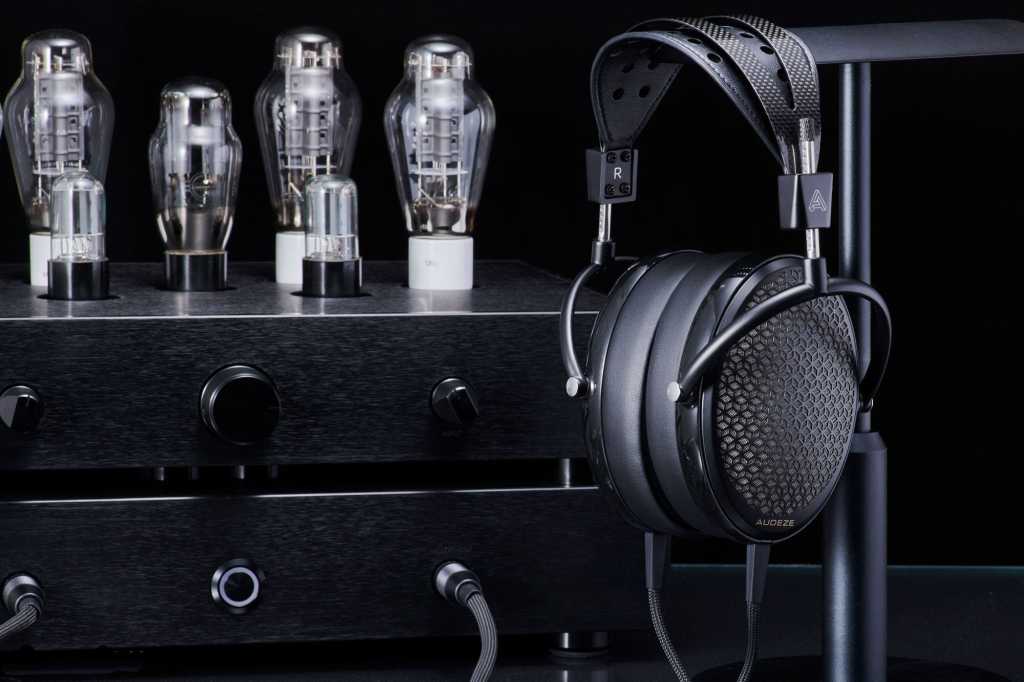 Audeze is well known and well regarded for its extensive lineup of superb planar-magnetic headphones; for example, see my glowing review of the LCD-1. Today, the company is taking a step into new territory with its CRBN (pronounced “carbon”) electrostatic headphone.

For those who are unfamiliar with planar-magnetic (PM) and electrostatic (ES) headphones, they are similar in that they have a relatively large, thin diaphragm suspended between two acoustically transparent structures called stators. In PM designs, the stators are permanent magnets, and the diaphragm has a flat, conductive ribbon that snakes across its entire surface. The ribbon carries the electrical audio signal, which creates a corresponding oscillating magnetic field that interacts with the static magnetic field of the stators, pushing the diaphragm back and forth.

In ES headphones, the diaphragm produces a static electric field (hence the name “electrostatic”) thanks to a DC bias voltage from a special amplifier, and the stators carry the audio signal in opposite phase to each other. The resulting oscillating magnetic fields interact with the static field of the diaphragm, pushing it back and forth. The result is the same in both cases: the oscillating diaphragm creates acoustic sound waves that enter the ear.

Whereas PM headphones can be driven by any conventional headphone amplifier, ES headphones require a special amp that supplies a DC bias voltage to the diaphragm, which obviously must be conductive. In virtually all ES headphones to date, the diaphragm is a plastic film with a layer of conductive material deposited on its surface.

Unfortunately, such coated diaphragms have several inherent problems. For one thing, the layer must be extremely uniform and only a few tenths of a nanometer thick to maintain an even force across the entire diaphragm. This is very difficult to achieve at production scale. Also, if the diaphragm gets very close to the stator, it can stick to the stator and damage the super-thin metal layer. Finally, because there is so little metal, it can degrade and wear off over time, especially in less-than-ideal environments such as high humidity.

This is where the CRBN breaks new ground. Instead of a conductive layer on the surface of the diaphragm, Audeze developed a technique whereby carbon nanotubes are suspended throughout the polymer material of the diaphragm itself. The density of nanotubes within the polymer can be precisely controlled, which in turn determines the conductivity of the diaphragm material. And because the charge is distributed uniformly throughout the film, the driving force is completely even without the distortions associated with typical coatings. Finally, the carbon-nanotube diaphragm is immune to the elements and will not degrade over time.

The CRBN evolved from a project originally instigated by doctors at UCLA, who wanted a headphone that could be used within an MRI (magnetic-resonance imaging) machine. Anyone who’s had to endure an MRI scan knows how claustrophobic and noisy they are—the sound pressure level can reach as high as 120 dB! Headphones can address both problems, playing calming music while implementing active noise cancellation. In addition, they can deliver audio stimuli that activate certain areas of the brain, which are then imaged by the MRI machine for diagnostic purposes.

Unfortunately, conventional headphones don’t work very well within an MRI machine because they often use ferrous metals in their construction, which are greatly affected by strong magnetic fields. Also, while the conductive layers in most ES headphones are gold or titanium, which are not affected by magnetic fields, they can interfere with the MRI images by casting “shadows.” Finally, headphones for use in MRI machines need to be very robust and able to reach high SPLs with low distortion and active noise cancellation to combat the high noise levels inside the machine. After three years of research and development, Audeze’s carbon-nanotube technology solves these problems beautifully.

Once the technology was perfected, Audeze realized it could be used in audiophile headphones as well, and the CRBN was born. The open-back, circumaural (around-the-ear) headphone weighs a mere 10.6 ounces and offers custom-designed leather earpads. It uses the standard Pro Bias voltage of 580V and requires an amp that supplies Pro Bias voltage to electrostatic headphones using a standard 5-pin connector.

The frequency response is said to extend from 15Hz to 40kHz (no tolerance given), though that applies to the drivers in isolation. I’ve seen the frequency-response measurement performed on a B&K HATS (Head And Torso Simulator) system, which includes a microphone at the eardrum of a simulated ear; the curve is flat down to 20Hz. That is very unusual for ES headphones, which normally roll off in the low end. The rest of the response follows the Harman headphone curve pretty well, with a bump at 3kHz and a rolloff above 10kHz.

In general, ES headphones exhibit less dynamic range than most dynamic or PM models, and the use of 580V as a bias voltage further limits the dynamic range compared with the older standard of 800V. In addition, dynamic and PM headphones tend to offer more bass, though Audeze designed the CRBN to remove that traditional deficiency. On the other hand, ES headphones often provide an ethereal quality of “air” that the other technologies can’t match.

At a list price of $4,500, the Audeze CRBN isn’t cheap—and you still need an amp to go with it. You can spend anywhere from a few hundred dollars for a used Stax amp on eBay to $5,100 for a Mjölnir Carbon amp or even more. Just keep in mind that the Sennheiser HE 1 cost a cool $59,000, though that does include the amp.

I heard a short demo of the CRBN at Audeze HQ, and it sounded spectacular. I’m expecting a sample soon, and I’ll report on more extended listening in a full review, so stay tuned!