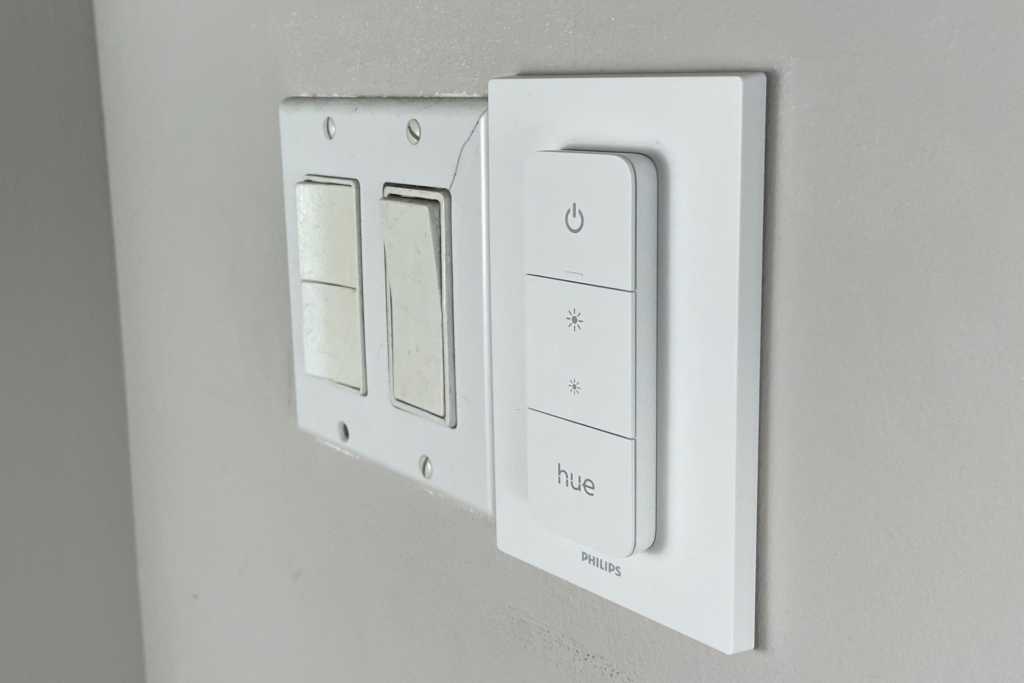 Equipped with a new button, a much improved wall plate, and greater configurability, the new Hue Dimmer Switch is better in every way.

First introduced back in 2015, the first-generation Dimmer Switch from Signify-owned Philips Hue was starting to feel decidedly dated, which makes the arrival of its greatly improved successor more than timely.

Not only does the second-gen Dimmer Switch look more contemporary, it also adds a new Hue button and a time-based light scene mode, along with a larger wall plate that allows for both peel-and-stick as well as screw mounting. Meanwhile, one of the killer features of the original Dimmer Switch—the ability to configure it via HomeKit—hasn’t gone anywhere. Also unchanged: the reasonable $25 price tag.

This review is part of TechHive’s coverage of the best smart light switches and dimmers, where you’ll find reviews of competing products, plus a buyer’s guide to the features you should consider when shopping for this type of product.

Measuring 3.6 x 1.4 x 0.3 inches (HxWxD), the new Hue Dimmer Switch is (when measured without its included wall plate) roughly the same size as the original, but that’s where the similarities end. For starters, the corners of the switch are more rounded than the older, boxier switch, and rather than the shiny—and to be perfectly frank, cheap-looking—finish of the original, the new version has a matte finish that’s (ironically) much more polished-looking.

In another change, the new Dimmer Switch ditches the four-button design of its predecessor. Now, instead of “on,” “brighter,” “dimmer,” and “off” buttons, there’s an “on/off” button, a brightness up/down rocker, and a “Hue” button for switching lighting scenes. By combining the on/off buttons and adding the Hue button, the new Dimmer Switch essentially gives you an additional button to play with. I’ll describe the functionality of the Hue button in a bit.

Also changed is the Hue Dimmer Switch’s wall plate. As with the switch itself, the plate now has a matte look rather than the shiny finish on the original—a welcome, better-looking change. And while the original plate was standard size (4.5 x 2.75 inches), the new plate is midsize (4.88 x 3.13 inches). It also comes in two snap-together pieces, with the rear section boasting both a peel-and-stick adhesive backing as well as six holes for mounting screws.

As with the original, the new Dimmer Switch magnetically snaps onto its wall plate, although even that functionality has changed. Now, instead of being housed inside the wall plate, the magnets now sit within the switch itself. That means (similar to the Hue Smart Button) you can snap the switch onto anything metal, such as a refrigerator door or a metal lamp pole.

The new Dimmer Switch is powered by a CR2032 coin cell battery (as opposed to the CR2045 cell battery for the older model), and Signify promises two years of battery life on a single battery.

As with its predecessor, the new Hue Dimmer Switch can be installed using the wall plate’s peel-and-stick backing. I ended up sticking my test unit in exactly the same spot on my kitchen wall where the original switch was. (Be careful removing the old wall plate, by the way; the adhesive on mine took a chunk of wall paint along with it.) And as I just mentioned, a new option is to screw rather than stick the plate to your wall.

Once that’s done, you simply fire up the Hue mobile app, tap Settings > Accessories > Add accessory, and then follow the instructions. For me, the app found the Zigbee-enabled Hue Dimmer Switch within a few seconds, and a minute later it was connected to my Hue Bridge. You then get to choose which lights the switch will control; you can pick a room, a zone (such as upstairs or downstairs), or one or more individual lights.

Speaking of bridges, the Hue Bridge is required to use the Hue Dimmer Switch. If you have Hue lights in your home that you’ve been controlling via Bluetooth rather than Zigbee, you’ll have to pony up for the bridge to add the new switch to your setup.

The addition of the Hue button marks the biggest change between the old Dimmer Switch and the new one, and you can set it to one of two modes: “scene cycle” or “time-based” light.

As you probably guessed, the scene-cycle mode cycles your lights through a selection of lighting scenes as you press the Hue button. You can pick up to five different scenes; so, for example, pressing the Hue button once might activate a “Bright” scene, a second press could trigger the “Concentrate” scene, and so on. The old Dimmer Switch has the same scene-cycle functionality, except you cycle through scenes by pressing the power button repeatedly rather than the Hue button (which the original Dimmer Switch lacks, of course).

While you can configure the switch’s “power on” functionality, you can’t do the same for “power off.” In other words, if the lights that the Dimmer Switch controls are on and you press the power button, the lights will always turn off, and there’s no option for changing that behavior. For most users, that’s probably not an issue, but if you were hoping for complete control of the power button for more elaborate setups, that’s the deal.

Finally, there’s the central dimmer rocker, and it does exactly the same thing as the two dimmer buttons on the original Dimmer Switch: It either brightens or dims your controlled lights. As with the first Dimmer Switch, the dimmer controls on the new version can’t be configured at all—or at least, not with the Hue app.

Just as with the first Dimmer Switch, the new version is configurable with HomeKit, and that includes all four buttons (HomeKit counts the central rocker as two buttons, hence a total of four). That means you could assign any HomeKit scene or automation to any of the Dimmer Switches buttons, as well as control any HomeKit-compatible smart device.

For example, you could set the Hue button to turn on (say) your LG TV and set it to your Apple TV input, or make the switch’s power button open your HomeKit-enabled smart shades. You can even assign multiple scenes or automations to a button press, too.

In other words, you could use HomeKit to turn the Hue Dimmer Switch into a control panel for your HomeKit devices, and the limits of what you could do are pretty much bound by your imagination. Pretty awesome.

I’ve long felt that the plastic-y, cheap-looking Hue Dimmer Switch from 2015 was a weak link in otherwise impressive Hue lineup. But with this revamped version, Signify has rectified most of the original’s shortcomings, with the result being more polished, modern, and functional. At the same time, first-gen Dimmer Switch features that did work well—including the easy installation and setup, plus the HomeKit compatibility—have remain unchanged. For Philips Hue users with a bridge, the new Dimmer Switch is an easy recommendation.