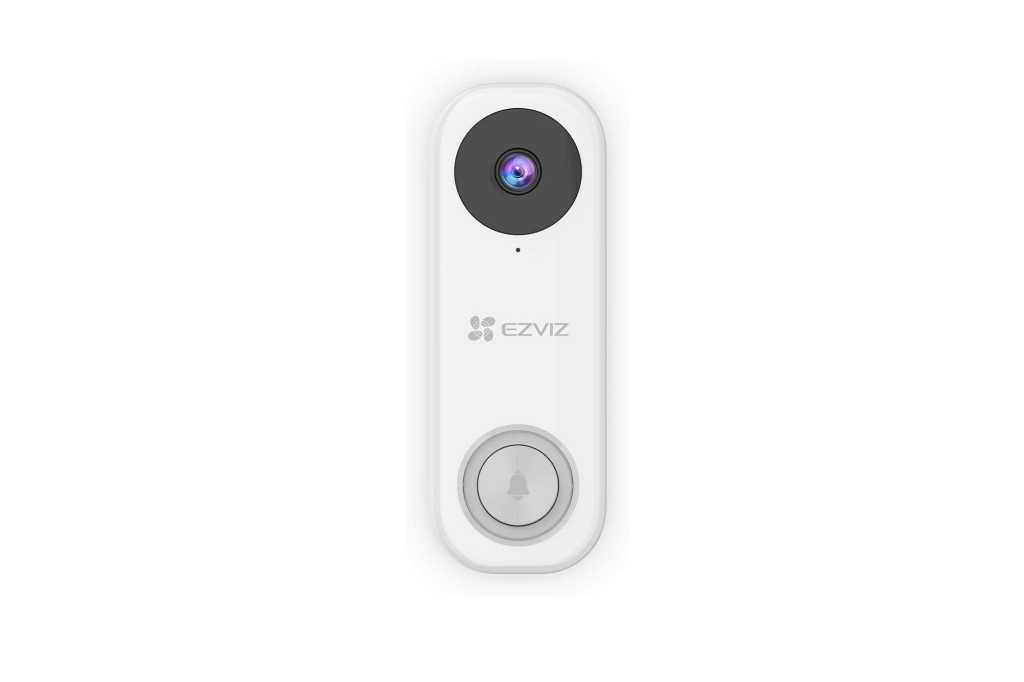 The EZVIZ DB1C is a smart video doorbell that can store clips in the cloud, on a local microSD memory card, or to a network video recorder. It doesn’t have the most complex menu of detection modes but those it has worked well.

We reviewed EZVIZ’s earlier video doorbell—the DB1—in late 2019. The new DB1C shares some of that product’s features—and it also depends on existing low-voltage wiring to operate—but we like it just a bit better.

The DB1C video doorbell is a white and smart-looking unit with a large call button at the bottom and a camera lens at the top. It has a small but noticeable green LED that is good at drawing your attention at night. It also makes an audible beep when it detects something (this feature can be disabled), which is good at drawing people’s attention to let them know they’re being recorded.

Like all video doorbells, it allows you to have a two-way call when someone rings the doorbell, accompanied by video on your end. Pressing the doorbell’s button results in the phone displaying an incoming video call (they can’t see you, of course, because there’s no display at their end).

The ability to store clips locally is a great feature. I always like to see this in doorbells as it shows the company has thought more about user convenience than selling a cloud subscription.

The doorbell has a slot for a microSD card and can be set to record everything there instead of to the cloud. This is great if you’re concerned about the security of sensitive information in the cloud, and also means you don’t need to subscribe to a storage plan to get the most from the unit.

There is also a third option for storage that I didn’t investigate: a network video recorder (NVR). EZVIZ makes one and the company’s website says it can work with other brands, too, but this isn’t specified. If you already have a camera network in your home, this is an option worth investigating.

Using local storage gives you the option to record all day long, not just when motion or a button press triggers the camera to capture a clip. The doorbell can accept microSD cards up to 256GB in size, which you can format directly from the app. But if you do want all-day recording, the NVR option will be much more practical.

When I first used the DB1C, I was getting alerted to numerous small movements in the camera’s field of vision, but I fixed that with a couple of settings. First, switching on the “human shape detection” feature vastly reduced false alerts. Second, narrowing the detection zone to an area where people will be walking also helped. The swaying tops of trees were then ignored.

At night, I found raindrops passing close to the doorbell, illuminated by the unit’s infrared light, looked like bright streaks and triggered numerous recordings, but the annoyance was minimal.

The camera’s fisheye lens has a 170-degree field of view and captures video in full high definition: 1080p. When you take snapshots, you get the full image—fisheye distortion and all—saved to your phone’s storage. When you play the video back, you can choose whether it’s presented as a fisheye video or corrected to appear flat but squished a bit so everything is a little thinner than it should be. The latter is probably what you’ll decide to use, and as much as the squished image seemed strange at first, I soon got used to it.

A word of warning regarding the somewhat confusing wording on the website and app. The camera has an option for “Ultra HD” mode, which isn’t defined but is generally understood to be a reference to 4K video. That’s not the case here. An “Ultra HD” clip I downloaded from the camera had a resolution of 1,536 pixels by 1,536 pixels. There’s nothing wrong with that and it’s a good, sharp image, but don’t think you’re getting 4K video.

The doorbell can be linked to Amazon Alexa and Google Assistant and controlled with voice commands. This interaction is not as fully featured as Amazon’s and Google Nest’s own competing doorbells, so consider how important that is to you.

This doorbell is rated IP65 for ingress protection, meaning it’s dustproof and protected from tight sprays of water (you can read all about IP codes in this other story). I had no problems with it while installed, either during the rain or on hot summer days. EZVIZ says the doorbell will work between -30 and 60 degrees Celsius (that’s 22 to 140 degrees Fahrenheit).

The camera clips easily into a plastic bracket that holds it onto the wall. It includes a security screw to keep anyone from pulling the camera from the bracket. It requires a 12- to 24-volt AC power supply, which is the standard for doorbells in North America.

Once the device is on the wall, the rest of the set-up routine is performed in the app. Using the app, you’re asked to scan a barcode on the front of the instruction booklet. That includes details of the doorbell and allows your phone to link to the doorbell and get it on your home Wi-Fi network—both 2.4- and 5GHz networks are supported.

I experienced no problems installing it or getting it connected.

The doorbell is definitively worth considering, especially if you’re looking for one with a local storage option. It worked well, reliably detected people coming to the door and didn’t throw up many false alerts. It’s good value for $100.