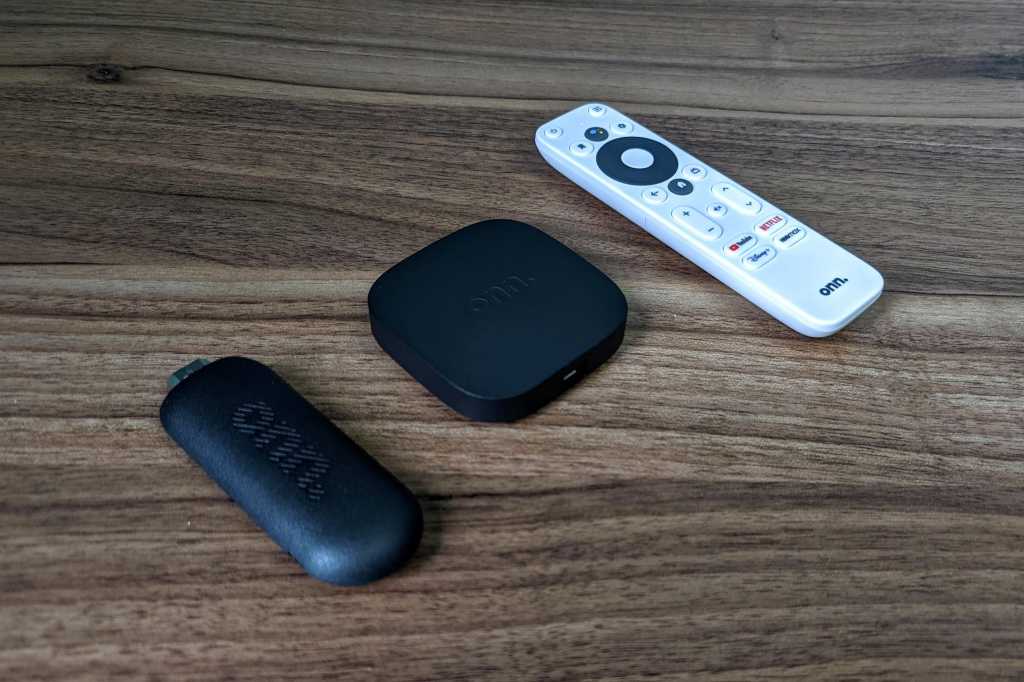 If you’re wondering which company makes the best streaming players for the least amount of money, you might not expect the answer to be Walmart. (Note: We’re awarding TechHive’s Editors’ Choice award to the Onn UHD only; the Onn FHD doesn’t quite reach that level, but it still earns 4 stars in our review.)

These streamers won’t tick every box for everyone. They don’t support Dolby Vision, Dolby Atmos, or HDR10+, and I had trouble getting TV volume and power controls to work on the cheaper FHD Streaming Stick. But if that doesn’t happen to you, and your streaming needs aren’t overly demanding, Walmart’s devices are surprisingly hard to beat.

Beyond the obvious differences in resolution, Walmart’s FHD and UHD devices have a few other distinguishing features.

The $25 FHD dongle, for instance, plugs directly into your TV’s HDMI port (or indirectly with a small HDMI extender cable), while the $30 UHD box comes with a three-foot HDMI cable instead. The FHD dongle also includes a micro USB cable, which can plug into either an included power adapter or your TV’s USB port. By contrast, the UHD box’s power adapter comes permanently connected to a microUSB cable, so you must plug it into an outlet. I’m not sure why Walmart did this, as I had no problem plugging the box into my TV with a separate USB cable.

The UHD box also has 2GB of RAM, versus 1GB on the FHD stick, and it ships with Android 10 instead of Android. But in practice, performance is pretty similar on both, with perhaps an occasional edge for the UHD box in switching between apps. Scrolling through menus was generally smooth across the board, and while I wish Google Assistant loaded a little faster, my experience never seemed out of step with other cheap streamers like the Roku Express 4K+ or Amazon’s Fire TV Stick.

For connectivity, both Onn streamers support dual-band 802.11ac Wi-Fi like most other modern streamers (save for Roku’s $30 Express, which only offers 2.4GHz 801.11n). It also includes Bluetooth, so you can hook up a game controller or use wireless headphones for private listening.

While only the UHD box supports 4K video, both devices support HDR10, which can make colors look more vibrant on compatible TVs. Unfortunately, there’s no Dolby Vision or HDR10+, which optimize those colors on a per-scene basis. (Amazon’s Fire TV Stick 4K and the Chromecast with Google TV support both formats, while the Roku Express 4K+ offers HDR10+.) Dolby Atmos support is missing as well, so those with Atmos systems won’t able to hear object-based surround sound.

Walmart’s remote has has lots of neat little touches. Channel up and down buttons let you flip through live TV in YouTube TV, Sling TV, and even Channels DVR., while a separate live TV button takes you straight into the YouTube TV app. (Sadly, this can’t be remapped.) There’s also a shortcut to the settings menu, a bookmark button for managing your home screen—more on that shortly—and the obligatory app shortcuts for YouTube, Netflix, Disney+, and HBO Max.

Unlike some other budget streamers (looking at you, Roku Express and Fire TV Stick Lite), the Onn remote has an infrared emitter along with buttons for volume, power, mute, and even input switching. Digging into the Android TV settings menu lets you choose your model of TV, soundbar, or receiver for IR control, and you can decide whether each button should use IR or HDMI-CEC.

There’s just one problem: None of those functions worked for me on the $25 FHD Streaming Stick. Across multiple TVs—and with a replacement review unit—all I ever got was a “something went wrong” error. Walmart seemed to be stumped by the problem, which didn’t occur on the $30 UHD Streaming Box. If this happens to you, I’d suggest shelling out the extra $5 whether you have a 4K TV or not.

Of course, hardware is only half the equation. For software, the Onn FHD Streaming Stick and UHD Streaming Box use Google’s Android TV software, which over the past couple years has evolved from a fairly clunky operating system into one with some clear strengths over Roku and Fire TV.

I’ve already opined on why I like the current Android TV interface, but the gist is that Google’s struck the right balance between helping you find things to watch and letting you jump straight into apps.

The home screen, for instance, includes quick links to your favorite apps, followed by recommendations from the apps you’ve installed. The “Discover” menu, meanwhile, provides more recommendations by category from apps like Disney+, Amazon Prime, and Hulu. (You’ll soon be able to set up a watchlist there as well.) There’s also an “Apps” menu that’s just a basic grid of icons. Overall, the approach is less dull than the Roku home screen, but more orderly than the Fire TV home screen.

Yes, some will nitpick over the teaser ads near the top of the home screen, but that’s to be expected on budget streamers. If anything, Amazon’s Fire TV banner ads are more obnoxious, and Roku’s ads take up a third of the app launcher screen, leaving less room for apps.

Google Assistant also remains one of the more useful voice assistants for streaming. You can say things like “New comedies on HBO Max,” “horror films from the 60s,” “watch I Think You Should Leave on Netflix,” “Tune to ESPN on YouTube TV,” or “listen to smooth jazz on Spotify.” Assistant can also control smart home devices, check on supported security cameras, and provide basic information such as the weather.

Like other Android TV devices, the Onn streamers act as Chromecast devices as well. That means you can play media on your TV using the music or video apps on your phone, and you can set images from Google Photos as your screensaver. (Sadly, Google still doesn’t let Android TV players partake in multi-room music setups with other Chromecast devices around the house.)

Some aspects of Android TV still need improvement. Fast-forward and rewind controls remain inconsistent across apps, with some requiring extra clicks to reach their on-screen buttons. The home screen could also integrate with more services—Netflix is notably absent from the “Discover” section and “Play Next” home screen row—and unlike the Chromecast with Google TV, there’s no menu for aggregating live TV sources. Compared to Roku and Amazon, Google doesn’t do nearly as well at recommending free things to watch either, which is surprising given the company’s ad-centric business model.

On balance though, Android TV finally has a cheap streaming device on which to shine, and Walmart, to its credit, doesn’t mess with it. While the device does offer to pre-load some apps like ESPN and Starz during setup, I didn’t detect anything that would qualify as offensive bloatware.

The Walmart Onn FHD Streaming Stick and UHD Streaming Box are as compelling as they perplexing. Seeing as Walmart doesn’t operate any streaming services—at least not since selling Vudu last year—it’s not clear what the retailer’s angle is in undercutting the likes of Roku and Amazon. Walmart declined to comment on whether the hardware is profitable or if it makes money from the device in some other way (like, perhaps, sharing in whatever ad revenue the device generates).

Regardless of motivation, Walmart has produced a pair of devices that hold their own—and in some ways excel over—the cheapest Roku streamers and Fire TV Sticks. For years, Google’s needed a budget device on which to champion Android TV; turns out if found two of them from an unlikely source.