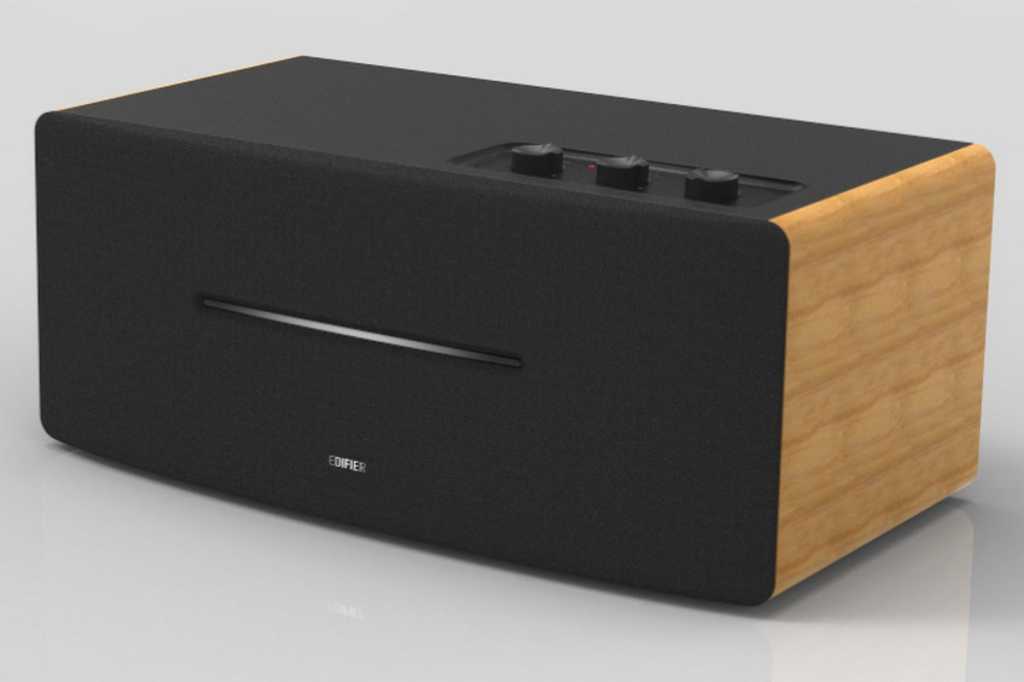 Image: Edifier D12
At a Glance

The Edifier D12 is a very affordable, handsome, good-sounding Bluetooth speaker that’s nigh on perfect for casual listening spaces—but only after you press the “movie” mode button on the remote.

The best way to describe the Edifier D12—a single-cabinet, Bluetooth stereo speaker—is that it’s a good-looking bargain. In fact, its industrial design and audio performance pretty much trump everything else in the $100 price range.

The D12 measures approximately 6 x 14 x 8 inches (HxWxD), including its including rubber feet. With woodgrain endcaps, a black finish on top, and a removable black soft fabric grill, it just looks like it should cost more.

The back of the speaker is home to the captive AC cord, power switch, stereo RCA inputs, 3.5mm auxiliary stereo input, and 3.5mm stereo line out. Knobs on top control bass, treble, and volume levels. These are of a comfortable size (approximately 3/4-inch), have smooth travel, and the two EQ knobs have a suitably haptic click at their dead center zero point.

The infinite volume knob clicks at each small interval, and it has a pleasantly gradual curve, so there’s no chance of a deafening sudden volume increase. That said, while the D12 puts out a good amount of volume, I wouldn’t call it deafening even at 10.

Behind the easily removed front grill are You’ll find wo 4-inch woofers, each of which receives 20 watts RMS of amplifcation, and twin 0.75 tweeters that get 15 watts RMS each. We’ve inquired as to the crossover frequency and will update this review if Edifier informs us. There’s also a power/Bluetooth connection indicator blinks when you’re not paired (if the other inputs aren’t in use) or when you reach maximum volume. There are two ports for increased bass response, as well as four holes for the friction-fit grill.

The D12 also ships with a multi-function remote control that allows you to change tracks, mute, change inputs, and switch the unit between its music and movie modes. The latter creates some space in the soundstage and accentuates dialog, but Edifier warns against using it for music because of possible distortion or other artifacts.

All in all, I’d call the D12 a very well-realized personal home speaker. While not explicity designed as such—there is no HDMI or optical connectivity features—it can also pull double duty as a soundbar (provided your TV has the needed connections).

The D12 sounds very good given its size and price tag. It’s capable of what I found to be a surprising amount of bass, though the low frequencies emanations were boom-ier than they were tight and punchy. I still liked the thump.

It’s high-end performance (2kHz and up) was adequate, but the mid-range, especially the upper portion (1- to 2kHz) is not quite as defined or as present as I’d like to hear. Stereo separation is decent, but not as obvious as I’d hoped when I first saw the box. You get the sense of stereo, but it’s not wide, and items in the sound field are not as distinct as they might be with a slight outward orientation.

Both of those admittedly nit-picky gripes might be due to speaker angle. The curved front grill gives the impression that the drivers are angled out to the sides, but they’re not. The speaker mounting panel behind that curved grill is flat, and the drivers themselves face dead front.

But I’m paid to be critical of sonic details. It’s good to remember that while the D12 looks very expensive, it’s priced at just $100. Put another way, the D12’s sound is competitive with everything I’ve heard that’s even close to it in price.

In the Edifier D12, you’re getting a nice-sounding, extremely good-looking speaker that’s just about perfect for the desk, kitchen, sewing room (a deliberate anachronism on my part), or any other casual listening space. It won’t rattle your rafters, but you can get one for an extremely attractive price.