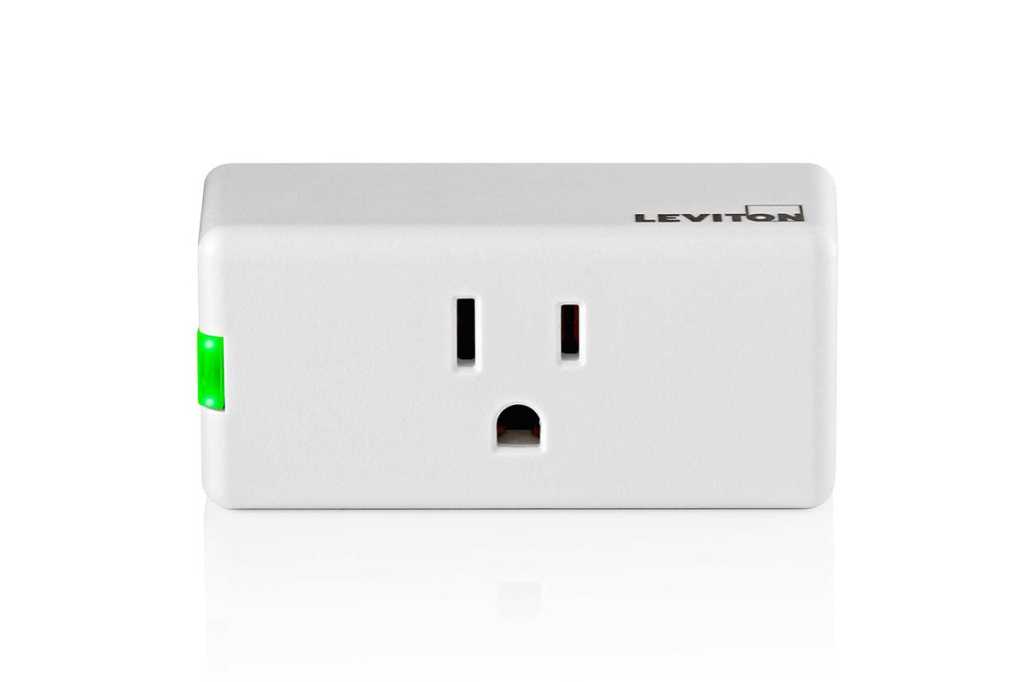 Leviton
At a Glance

HomeKit support is the big draw with this second-generation switch, but we had trouble with that feature during our testing.

Leviton has been one of the most reliable names in Wi-Fi smart plugs, and for years I relied on one of its first-generation Wi-Fi plugs to power my living-room lights. With this second generation, Leviton brings a streamlined setup process and HomeKit support to the party.

Leviton’s model D215P is a three-prong on/off switch; model D23LP is a two-prong model with a dimmer feature. Let’s start with the specs, which should be unsurprising. The D215P looks identical to the first-generation Wi-Fi plug, with the familiar horizontal brick design and a single three-prong outlet on the face. It’s slim enough so that two plugs can be used in one receptacle. A lighted power button (which can be disabled) is available to the left. The unit is rated to support 15 amps/1500 watts.

The D23LP dimmer looks identical to the D215P except that it offers only a two-prong receptacle. It’s rated to control 100 watts of LED lighting or 300 watts of incandescent/halogen lights. The power button is only an on/off switch and can’t be used to dim and brighten by holding it down; that all must be done via Leviton’s app. The good news is that a bevy of advanced options are available in the app to control dimming operations, including tweaking minimum and maximum brightness and setting fade-up and -down rates.

Setup for both units works the same way in the My Leviton app. In my testing, the app performed as promised, quickly discovering both devices after I plugged them in, then adding them with ease to my Wi-Fi network (although only 2.4GHz networks are supported—a curious step back from the first generation, which support both 2.4- and 5GHz networks). The app hasn’t changed significantly in recent months; it’s still a fairly no-frills affair that gives you access to manual control of your lights, rooms, scenes, and scheduling. Navigating the app is simple, but there’s really not much to it (and that’s a good thing). One minor twist: A “home” and “away” mode in the app gives you easy access to your most commonly used settings if you travel frequently.

But what about that highly coveted new feature: HomeKit support? Well, the big draw was at first a bit of a bust. I spent days trying to configure HomeKit on both devices, both before connecting to them via the My Leviton app and afterwards. (Both methods are supposed to work.) Only after having them installed for nearly a week did HomeKit abruptly begin to work, and I was able to add the plugs to the iOS home app successfully.

Fortunately, I had no such issues with Amazon Alexa, which connected seamlessly to the devices from the outset and allowed me voice control over the duo. Google Home is also supported. I’m not sure if the HomeKit issue is a temporary bug related to these being new products or a sign of a more significant problem, but it’s a potential problem worth being aware of.

At $25 for the switch and $30 for the dimmer, Leviton’s products are slightly more expensive than the field, though their general stability is better than most. For now, they’re a cautious recommendation; work the kinks out of the HomeKit system and they’ll definitely merit a full endorsement.