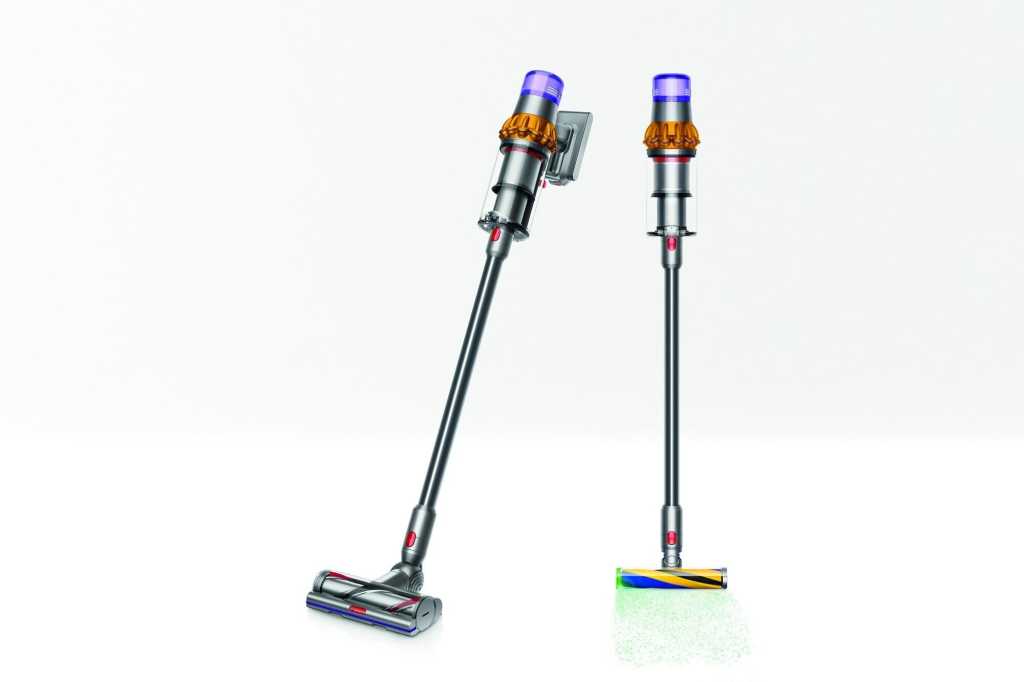 Easy and gratifying to use, the Dyson V15 Detect cordless vac sniffs out and sucks up dirt with astonishing skill, but owners of delicate hand-knotted rugs might find it to be too much of a good thing.

The Cult of Dyson has a new beaut to covet: the Dyson V15 Detect cordless vacuum cleaner. It’s simply the best in a long line of lightweight, increasingly powerful cordless stick vacs that have earned the brand an avid global following.

The V15 Detect is a hyper-polished, ultra-helpful housemate; premium-priced but arguably worth it over the long run at $699.95. Weighing just 6.8 pounds, yet lion strong, this vacuum is extra-easy to assemble and use in stick or hand-vac modes, making home cleaning not just more convenient, but almost effortless—even fun. Dealing with a sudden spill or doing a daily touch up is a no-brainer when you have this slim thing hanging on its wall-charging station or stashed in a closet. The V15 Detect adds fresh features and tweaks, including a helpful laser light and an innovative display.

This review is part of TechHive’s coverage of the best smart vacuums, where you’ll find reviews of the competition’s offerings, plus a buyer’s guide to the features you should consider when shopping for this type of product.

The V15 Detect’s revved-up suction power is its most noteworthy refinement. I thought I had it good with my older Direct-Drive power head Dyson stick vacs: a 2014 DC59 (aka the V6) and a now five-year-old V8 that remains in Dyson’s lineup. But since taking on the V15 Detect for review, I’ve been shocked by the amount of pet hair and deeply embedded grit, mites, moth eggs, and pollen I see in its canister immediately after running one of my older Dysons over the same zone. I’d swear I’m breathing easier this allergy season.

The V15 Detect’s point-and-shoot canister emptying isn’t an entirely new feature, it was first spotted in the V10 and V11 product lines, as well as on the mega-capacity Outsize, but it has been refined here. It’s another checklist item bound to persuade users of older Dyson sticks to declare “time to upgrade!” That’s because earlier models required you to disassemble the tank and wipe it out. Dustbin dumping is now a super-quick, totally hands-off operation.

Anyone considering giving up their bulky, clumsy standup or canister vac will be convinced to make the switch within five minutes of laying hands on this machine. Who needs power cords and hoses that limit maneuverability and can literally trip you up? Tellingly, Dyson has grown so confident of its cordless stick vacs’ performance that the maker has stopped refining its standup vacuum cleaner models.

The V15 Detect’s suction power is way up, thanks to airflow improvements in the three motorized power heads bundled with the machine: the Slim Fluffy for bare floors, an updated High Torque head for carpet and rug use, and a compact Hair Screw tool attachment for furniture and stair cleaning while in hand-vac mode. Plus, the V15 Detect’s proprietary Hyperdymium digital motor now cranks 230 air watts and 24 percent more suction power than the 185 air watts version found in one-step-down V11 series. Despite the increased power, the new kid clocks a full hour run time in Eco mode before needing a battery recharge—or a battery-pack swap, if you’ve purchased a spare. That’s an option older Dysons don’t offer.

The V15 Detect is a tad top-heavier than I’m used to with Dysons. The battery pack has grown in girth to achieve a longer run time (60- versus 40 minutes), and the dustbin has been stretched to improve its capacity. But this thing is not as bulked-out as Dyson’s latest Outsize model (the one actor/comedian Billy Crystal recently held up with a grin on CBS Sunday Morning when asked what he’d been doing “for fun” during the COVID 19 quarantine.)  And I’ve only really found the V15 Detect more unwieldy than my V8 when working it in hand-vac mode on the sofa and stairs.

The V15 Detect’s cutest new feature is a green laser light mounted to the front of the motorized bare-floor Slim Fluffy brush head. It illuminates otherwise invisible dust (and encourages insomniacs to do some nocturnal cleaning).  Using it didn’t seem to diminish the vac’s battery run time, but it is nonetheless easy to switch on and off.

Refinements have also been made on the motorized carpet and furniture brushes, to prevent carpet threads and hair from tangling up on the rollers. Both performed as promised, though I should note that the conical-shaped, open-at-one-end Hair Screw upholstery brush also introduces a bit of rattling to the otherwise moderately quiet operation. And I do have mixed feelings about the retractable combs on the front lip of the High Torque rug-cleaner head. These teeth, which I didn’t find on my older Dysons’ power heads, certainly “part” the carpet fibers, but they might also inadvertently pull some out. The same is true of the device’s beater brush.

You can track the vacuum’s particle-pickup performance (an oddly exciting thing to watch) on a color LCD display on the back end of the body. Dyson says a piezo sensor not only counts the number of dust particles the vacuum is pulling up, it measures them in order to automatically fine-tune the amount of suction needed for the current cleaning job. You can also manually shift the vac’s operating mode from Boost to Auto to Eco and monitor the remaining battery charge time with this display.

In truth, however, I rarely ran the V15 Detect in Auto mode during my review, because the sensor and High Torque head don’t work well with some of my very expensive, low-pile, hand-knotted wool rugs. The machine would oddly shift into maximum Boost mode, cranking up the suction and motor revolutions (125,000 rpm max) to such a degree that the carpet head attached itself to the rug and wouldn’t let go!

Having just spent close to a grand to clean and repair three of my woven treasures that had suffered moth damage, the V15 Detect’s suction power has been most welcome. And the payback, with persistent use, has been gratifying. I’m now rarely spotting even a single moth flitting around the house, whereas I used to sight, chase, and smack down several every day. (A few non-toxic—to people and pets—Safer-brand moth traps also factor in my pest-control campaign.)

My rug-cleaning obsession does make me fear I’m becoming my grandmother, who Hoovered her apartment almost every day. But I can’t overemphasize how bother-free the V15 Detect is to run: It’s pint-sized and easy to grab, yet mighty. Some users complain about Dyson’s “dead man’s brake” trigger—the vacuum shuts off the moment you release the trigger—but it doesn’t bother me, because I appreciate the motivation behind the design decision: It maximizes the battery’s run time.

My seasoned, Iranian-born rug dealer/cleaner/repairer almost had a heart attack when I bragged about testing a powerful new Dyson vac with an always-on motorized roller head. “Stop that!” he declared. “It’s pulling out threads, destroying your rugs! Only use a vacuum cleaner with a non-motorized head. Never use a vacuum with a beater bar.”

I do own and now only occasionally use one such vacuum cleaner: a high-end, Swedish-made Oxygen by Eureka canister model that a seasoned vac-repair guy once told me had “excellent” suction power. No, it doesn’t pull up the rug threads that I spot in the Dyson dump pile after working over the loose-weave Turkish Kilim in my dining room. But honestly, the Oxygen also fails to suck out the micro-grit deeply embedded in this antique rug.

I wish Dyson could figure a way around this dilemma; perhaps, with a power head that has strong suction, but is also equipped with a beater bar you could turn off. Until that happens, I’d still recommend vacuuming with a Dyson V15 Detect. It’s an ounce of prevention that’s worth a pound of moth-hole-repairing cure.