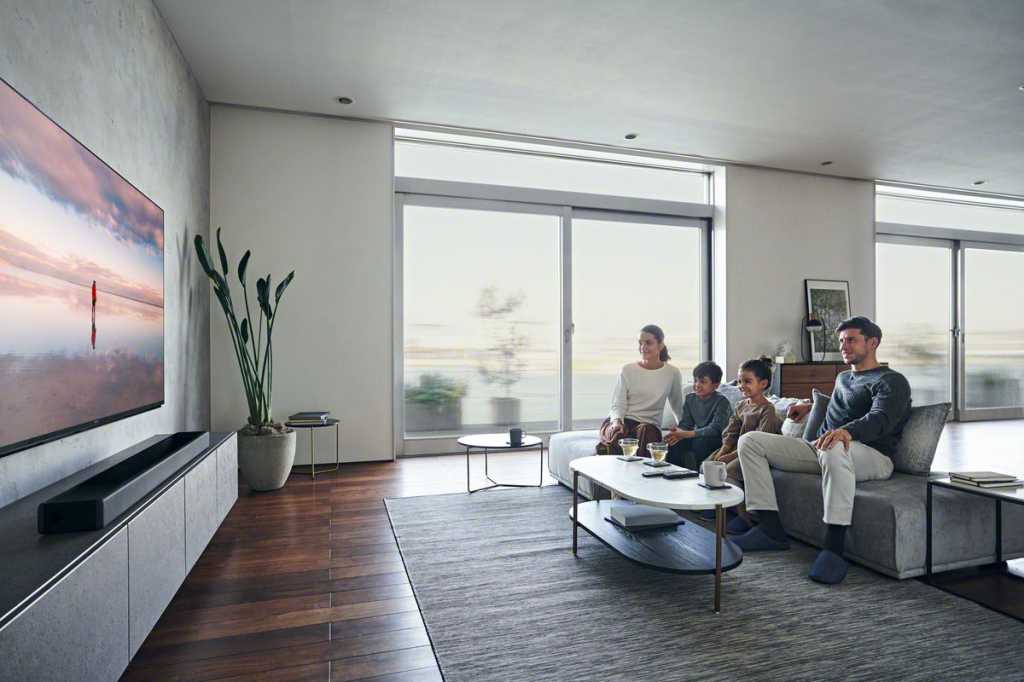 The Sony HT-A9 home theater system ($1,800) consists of a control box with a LAN port and HDMI in and out, along with four cylindrical, wireless, self-powered speakers. Each speaker has two built-in microphones that measure the speaker’s relative height and position in the room. Sony’s 360 Spatial Sound and Sound Field Optimization technology then creates up to 12 phantom speakers by synthesizing sound waves based on positional information.

Sony says its sound field optimization tech ensures every person in the room will have the same sound experience, no matter where they’re sitting in the room, even if each speaker is placed at a different height from the floor and at unequal distances from each other. Each speaker has a power cord, but they communicate with the control box using a wireless connection.

The system supports the two most important immersive audio standards for movie soundtracks—Dolby Atmos and DTS:X—as well as Sony’s own 360 Reality Audio format for music streamed from Amazon Music HD, Tidal, Nugs.net, and Deezer. The system can also stream music from Spotify (including Spotify Connect capabilities), and there’s support for both Chromecast and Apple AirPlay 2.

In addition to supporting both ARC and eARC (you can read all about those standards in the linked article), the control box supports up to 8K HDR, 4K 120-frames-per-second passthrough, and Dolby Vision. When paired with a compatible Sony Bravia smart TV offering Acoustic Center Sync, the A9 promises to precisely match where the audio is coming from with the action on the screen.

Sony’s flagship soundbar is a 7.1.2-channel model with two up-firing speakers that will bounce the height cues in a Dolby Atmos or DTS:X soundtrack off your ceiling. The speaker is also outfitted with two beam tweeters and five front speakers for a wide soundstage, and a built-in subwoofer for low-frequency effects.

The company says its Vertical Surround Engine enables the speaker to position sound in vertical space without needing speakers in the ceiling. As with the A9 system, Sony’s Soundfield Optimization technology uses microphones built into the speaker to measure the height and width of the room. The system will take into account the presence of an optional subwoofer or surround speakers while optimizing the sound for the room the speaker is in.

Like the HT-A9 home theater system, the HT-A7000 ($1,300) supports high-resolution audio (defined as audio files with sampling rates higher than 44.1kHz and better than 16-bit resolution) and Sony’s own 360 Reality Audio format. The soundbar also features Sony’s DSEE Extreme audio-processing technology, which is designed to restore the higher frequencies that can get squashed when audio recordings are digitally compressed.

The new soundbar features dual HDMI inputs and a single HDMI output with support for ARC and eARC. The HDMI ports support 8K HDR, 4K pass-through at 120Hz, and Dolby Vision. You’ll also find a Toslink optical digital input to support older TVs, and a 3.5mm analog audio input. A USB-A port is provided for streaming audio from a thumb drive. All of the same streaming services (Spotify, et al) that the HT-A9 system supports are available here as well, as is support for Chromecast and Apple AirPlay 2. Both home theater products work with Amazon Alexa and Google Assistant, too.

Should you crave more bass than what the HT-A9 or HT-A7000 can pump out, both systems can be supplemented with one of two wireless subwoofers: Sony’s SA-SW5 ($700) features a 180mm (7.08-inch) driver powered by a 300-watt amplifier (a passive radiator is also in the cabinet), while the company’s SA-SW3 ($400) pairs a 200-watt amp with a 160mm (6.3-inch) driver in a compact bass-reflex enclosure. If the HT-A7000’s virtual surround sound doesn’t scratch your immersive audio itch, you can add Sony’s $350 SA-RS3S surround speakers to your listening room.

Sony says all of the new home-audio products announced today will be available to order in the September/October timeframe.