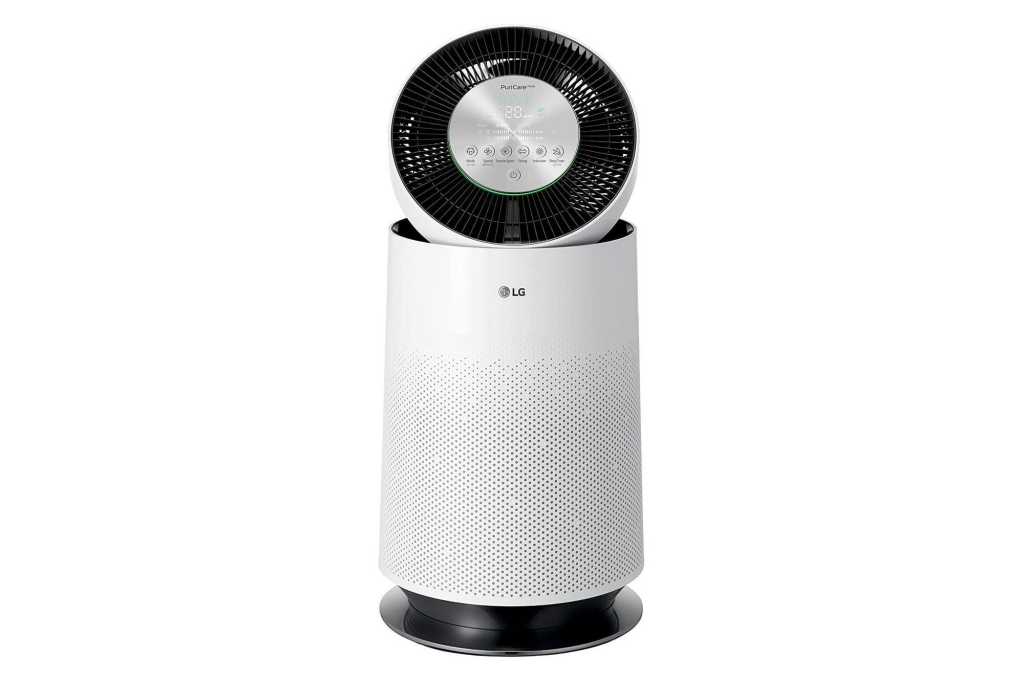 Image: LG
At a Glance

This is a handsome air purifier, but it lacks any special features to merit its premium price tag.

What is it about air purifiers and the droid design conceit? LG’s PuriCare 360 AS330DWR0 could have fallen off the Millennium Falcon, and it even has a circular head unit that pops up and swings from side to side, completing the futuristic effect.

This is a big purifier, 25 pounds and almost two feet tall with the head unit down, designed as a thick cylinder that sucks in air from all sides and spits clean air out the top. Controls are all mounted in the center of this upper head component, and while they aren’t immediately intuitive, you can figure things out reasonably quickly.

Three operation modes are available, including a normal (adjustable) mode, a “smart” automatic mode, and “booster,” which causes the “Clean Boster” head unit to slowly extend, activating a secondary fan which emits clean air at a near-horizontal angle rather than directly upward. (It can actually work as a small room fan in this mode.) Turn on the “swing” mode and the Clean Booster oscillates through 70 degrees of rotation.

Additional controls on the unit include separate speed controls for both the internal fan and the booster fan, a sleep timer, and an indicator button. This lattermost button doesn’t turn off the indicator lights but rather causes the onboard LED to cycle through three condition levels, including a numerical value and color-coded indicator—from red (very bad) to green (good)—for three different particulate measurements: PM10, PM2.5, and PM1.0. Only one of these three measurements can be displayed at a time. A separate color-coded indicator is available as a gauge of odor conditions.

A replaceable cylindrical filter can be found in the base of the unit; the three-way filter includes a HEPA filter (H-level unstated) as well as a carbon deodorizing filter and an ultra-fine particle filter. The filter is stated to last about a year in normal use (an onboard indicator lets you know when a replacement is needed). Replacement filters run a hefty $129 each.

Despite the size of the unit, it is specified for rather small spaces: Just 310 square feet, with CADR (Clean Air Delivery Rate) numbers of 200 (smoke), 200 (dust), and 220 (pollen). Those are just so-so numbers, but the system claims performance of 99.97% effectiveness at trapping particles as small as 0.3 microns. It is also certified under the asthma & allergy friendly certification program from the Asthma and Allergy Foundation of America and Allergy Standards Limited.

While the unit is quiet at very low fan levels, the Clean Booster mode can get pretty loud; LG doesn’t offer a decibel specification for its higher speeds, however.

The PuriCare connects to the LG Thinq app—at least in theory. Unfortunately, I was never able to get this to work, despite having two other LG appliances successfully connected to the app and working fine. Like most smart devices, it requires a 2.4GHz Wi-Fi connection, but it choked repeatedly when trying to connect to my router (which operates a 5GHz network with the same SSID). I didn’t have any luck connecting to a 2.4GHz-exclusive SSID either, despite nearly a week of attempts and troubleshooting. Requests for technical support were never answered. Even if you are able to get the device to work on your network, be advised that the connection process is lengthy and convoluted.

The good news is that the PuriCare includes an old-fashioned infrared remote control which replicates most of the functions on the device itself. It’s a simple device, although, inexplicably, the “light” button only shuts off a single one of the many LEDs on the top panel. There’s no way that I’ve discovered to shut off all the LEDs, which makes it largely unusable when you’re trying to sleep.

At $700, LG’s PuriCare is the most expensive purifier I’ve tested to date, $100 more than both the NuWave OxyPure and the Blueair HealthProtect 7410i. Unfortunately, it’s got less power than the former, is louder than the latter, and unlike both of them lacks a functional mobile app. While the design is intriguing, there’s nothing here particularly that merits paying a premium for it.