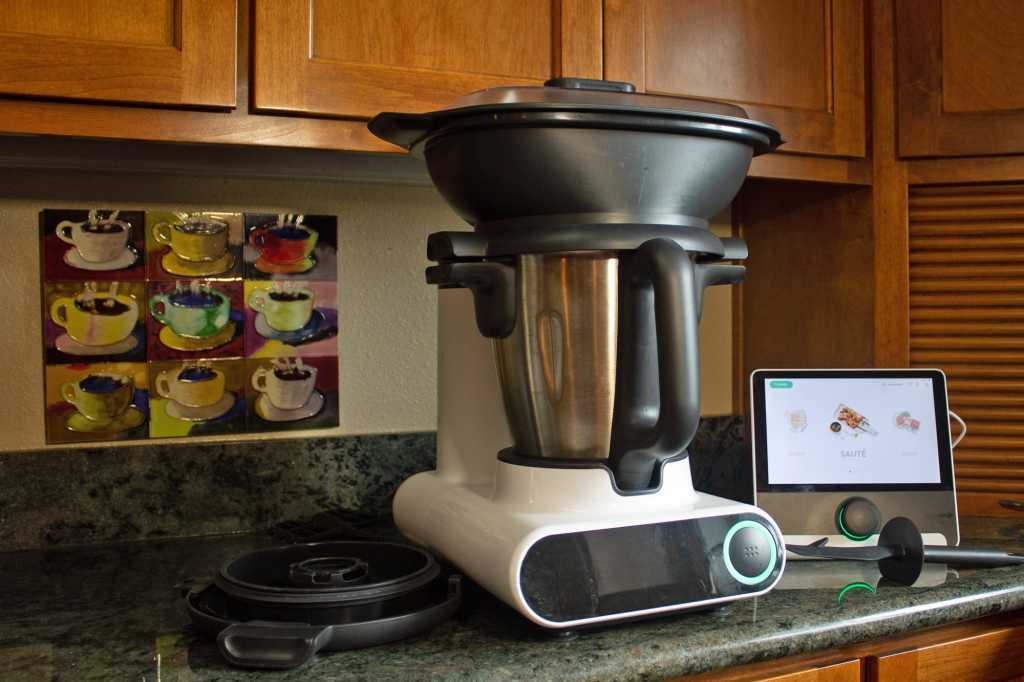 The CookingPal Multo is a massive food processor that can cook your food as well as prepare it. But you need to use the recipes on the included tablet to get the most benefit from it, and there just aren’t enough of those.

Cooking is a joy for some; everyone else doesn’t have the time, or the confidence in their skill, or is just a devout reader of The I Hate To Cook Book (first published more than 60 years ago!). CookingPal targets the latter crowd who wants something better-tasting and more nutritious than frozen entrees or fast food, and that’s less expensive than prepared meal or restaurant delivery.

The Multo mostly automatically handles all the meal-prep steps—it can weigh, chop, grind, whip, knead, and mix your ingredients—and then it cooks your food—either in the same bowl, in a simmering basket that fits inside the bowl, or in steaming trays that mount on top of the bowl. CookingPal promises the gadget will even clean up after itself (spoiler alert, it really doesn’t).

The system consists of two main components: There’s a food-processor-like appliance that does the prep work and the cooking, and there’s a custom-made, 8.9-inch tablet—the Smart Kitchen Hub—that plugs into and controls the appliance (it comes with a stand to keep it propped up like a cookbook).

Once you’ve browsed through the small collection of recipes (CookingPal says it will be adding five new recipes every week) and gathered all the ingredients you’ll need, cooking becomes a simple matter of dropping these into the bowl, touching icons on the display (or using the tablet’s jog wheel) at each step of the process, and waiting. You can adjust the number of servings you wish to prepare, and the Hub will automatically recalculate how much of each ingredient you’ll need, adjusting the cook time accordingly. The whole system connects to your Wi-Fi network.

The Multo is a beast

My biggest complaint about the Multo has to do with its size—its 3.1-quart stainless steel bowl is overkill if you’re cooking for only one or two people, and the whole thing is an absolute beast of an appliance, measuring 17.3 x 12.2 x 14.5 inches (DxWxH), not including the tablet that must be kept next to it while in use (because it’s tethered by a USB cable). The main unit is also very heavy. That bulk, combined with the suction-cup feet designed to prevent the appliance from walking off your counter while performing intensive tasks such as grinding meat, render it awkward to pick up and move. As such, you’ll probably leave it out on the counter even when you’re not using it; it’s too tall to fit in the typical appliance garage anyway.

I initially placed the Multo on the countertop area where I use other appliances, including my toaster and coffee maker. Horizontal space wasn’t too much of an issue—it was a little crowded, but I still had space for a cutting board—but when I stacked the steaming bowl and steaming tray on top of the primary bowl, I discovered I couldn’t open the cabinet above the counter. The Multo was so tall that it prevented the door from swinging open. I solved that problem by moving the appliance to my island, but it monopolized a big swath of my prep space there and made it awkward for anyone else to get into the refrigerator while I was standing at the machine.

The Multo is an impressive food processor

The Multo is outfitted with a powerful 10-speed motor and a four-blade stainless steel blade that can spin at up to 5,200 rpm. For one of the recipes I cooked, I needed one pound of ground pork. I didn’t have any on hand, but I did have an inch-thick pork chop that I had sliced off a large tenderloin I’d purchased at Costco and froze. I thawed the chop in the microwave, tossed it in the Multo, pushed a couple of buttons on the tablet, and had a pound of ground pork less than two minutes later.

For other recipes, I used the machine to grate parmesan cheese; chop vegetables; blend, emulsify, and puree ingredients; whip cream (after mounting the provided whisk attachment to the blade), and more. The Multo’s large, sharp blades and butterfly whisk attachment mounted to its very strong motor made short work of all those tasks. That said, the much smaller Cuisinart food processor that’s already in my kitchen can do all those things, too. The key difference, of course, is that the Cuisinart can’t cook the food.

I am not an accomplished chef, so the idea that I could prepare fancier meals with some technological hand-holding from the tablet cookbook was very appealing. But most of the recipes I found there seemed surprisingly simple: Meatloaf, macaroni & cheese, meatballs, spaghetti Bolognese, and the like are not exactly exotic dishes. I nevertheless prepared all those meals and a couple more over several weeks of testing, tolerating my wife’s good-natured taunts that she could have done everything much more quickly without the crutch of a smart appliance. But to be fair to CookingPal, my plodding pace probably had more to do with the fact that I was simultaneously learning something entirely new and documenting all the steps in the process.

The meatloaf was my favorite dish, though as I noted above, I departed from the step-by-step instructions to grind some pork, first (the recipe also called for a pound of hamburger, which I did have on hand). I placed both meats along with the herbs and spices the recipe called for in the bowl and blended everything together, then took the ground meat out and formed it into a loaf and placed it on the steaming bowl that sits on top of the stainless steel bowl. To create the sauce, I put tomatoes, more herbs and spices, and the rest of the ingredients the recipe called for into the bowl and used the food processor to puree everything. The tablet walked me through each step and controlled the Multo accordingly.

When it came time to cook the sauce, I added some sliced vegetables to the steaming tray that fits in turn atop the steaming bowl, and pushed a button on the tablet to start cooking. The steam produced from sauteing the sauce also cooked the meat and the other vegetables, resulting in a main course and a side dish using just one appliance. The meatloaf and the sauce (poured over the meat at serving time) both tasted great, but cooking the sauce cook on top of the meat—in a conventional oven—would have done a better job of melding the two flavors together.

The steps for the spaghetti Bolognese recipe, meanwhile, have you prepare the sauce in the stainless steel bowl, but when it’s finished, you need to pour the sauce out into another container and cover it with foil to keep it warm. That’s because you need to fill the stainless steel bowl with water so you can boil the noodles. If you were using one pot to cook the sauce and a second one to boil the noodles, the sauce wouldn’t have a chance to cool before you served the meal. I could, I suppose, have strained the noodles, put them back in the bowl, poured the sauce over them, and used the tablet to turn on the appliance’s “keep warm” setting, but I just wanted to eat at that point.

As for the promise that the appliance will clean itself after cooking? I suppose it depends on what you cooked. It might clean up after preparing a meal with a lot of liquid—a soup, perhaps—but if you chop or grind or cook anything at a high temperature (the Multo’s range is between 100- and 265-degrees Fahrenheit), you’re going to need to remove the blade and do a little scrubbing. Just putting soapy water in the bowl and spinning the motor to clean it won’t achieve your goal. Also, the Multo doesn’t always reduce the number of dishes you need to wash, with the spaghetti Bolognese example above being a case in point.

The bottom line on the Multo

Available for $799 at the time of this review (a $200 discount off its suggested retail price), the Multo by Cooking Pal is a very large, very powerful, and very expensive smart kitchen appliance. It mostly delivers on its promise to prep and cook using just one tool, but it has too few recipes that take full advantage of its capabilities, and there would be an unavoidable learning curve should you use it to prepare your own favorite recipes. The scale and food-processor features would come in handy, but you’d need to determine the appropriate adjustments in cooking time and temperatures.

In the long run, cooking meals with the Multo would probably be less expensive that getting pre-portioned ready-to-cook meals from a subscription service like HelloFresh, but it would be more work. It would undoubtedly cost less than ordering restaurant delivery more than a few times a week using a service like DoorDash or Uber Eats, but just as there will be a limited number of restaurants you’ll want to patronize, so is there a limited number of recipes the Multo can instruct you to prepare, although CookingPal promises to deliver more recipes are coming. For a novice chef, meanwhile, learning to cook with the Multo won’t really teach you how to cook in a conventional fashion.

I love food and I’ve always wanted to be a better cook, so I was excited about what the Multo promised. I’m also the kind of geek who thinks a dash of technology will make anything better. While I enjoyed the meals I prepared in the Multo, its hulking size made it feel like it was always in the way—or that I was in the way of everyone else while I was using it. There also weren’t enough recipes included with the tablet, and many of the ones that were sounded mundane. My wife, meanwhile, who has far more experience cooking than I do, wanted nothing to do with this smart appliance.

Updated shortly after publication to add that CookingPal plans to add five new recipes to the tablet’s collection each week.