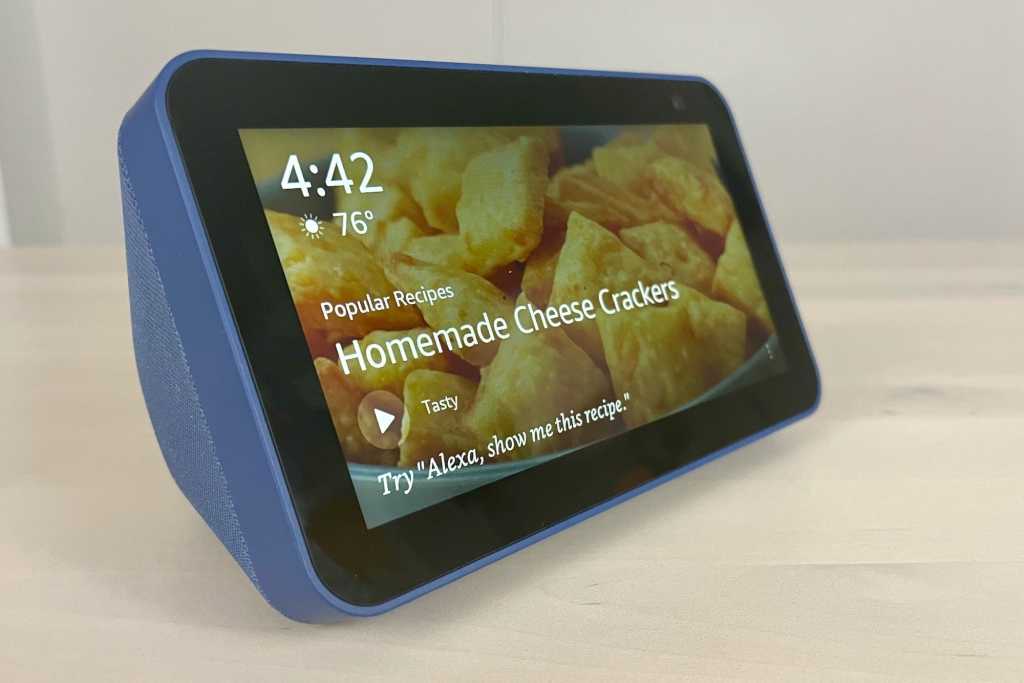 The updated Echo Show 5 gets some modest improvements, leaving the cheaper original as an enticing alternative.

If you’re already the owner of Amazon’s original Echo Show 5 and wondering if you should upgrade to the new, second-generation version, I’ll cut to the chase: Don’t bother. Save for a marginally sharper camera, a new proximity sensor, and a couple of different colors, this is almost exactly the same smart display as the previous model, complete with virtually the same design, the same CPU, the same screen and speaker, and the same Alexa.

Of course, that’s all good news if you’re shopping for your first Echo Show. The compact Echo Show 5 makes for a superb smart display and a dazzlingly smart alarm clock, not to mention Alexa’s unsurpassed smart home abilities. You’ll also be able to make video calls to other Echo devices, make free phone calls to most any number in North America, watch live TV, stream music, and turn the display into a decent (if not perfect) digital photo frame.

That’s a compelling feature set for $85, but you’d be a fool to pay sticker price for any Echo device. Amazon is continually slashing prices on its Echo products, and while the second-gen Echo Show 5 hasn’t seen any discounts yet, it’s only a matter of time. Meanwhile, we’ve been seeing crazy-cheap deals for the first-generation model. Should you spring for the original instead? Read on.

Physically speaking, the second-gen Echo Show 5 looks virtually identical to its predecessor. Measuring 5.8 x 3.4 x 2.9 inches (WxHxD), the Show 5 has a wedge-like shape when viewed from the side, similar to how an old-school digital alarm clock might look. The Echo Show 5 fits nicely on a bedside table or a dresser, or it could sit on a kitchen counter next to your utensils jar (just don’t get it wet).

The new Echo Show 5’s 5.5-inch, 960 x 480-pixel display is precisely the same size and resolution as the original, and the physical camera shutter switch, volume buttons, mic mute/camera off button, and microphone openings are all in the same positions along the top edge of the screen. Also still present is the camera lens near the top-right corner of the display, which you can cover with the camera shutter. There are two changes to the camera, however: it’s now two megapixels rather than one, and its opening is square-shaped rather than circular.

On the rear of the Echo Show 5, you’ll find the familiar barrel-shaped power port and a microUSB service port, but a key interface is now missing: a 3.5mm jack for connecting a wired speaker. You can still tether a wireless speaker to the Echo Show 5 via Bluetooth, but the lack of an audio jack is a bummer.

The Echo Show 5’s fabric covering gives it a homey feel, and it’s now available in a new color: Deep Blue Sea, in addition to the original Sandstone and Glacier versions.

Following the initial power-up process, the Echo Show asks you to select a primary device language, and then you’ll need to pick your Wi-Fi network and enter your network password by tapping it on the screen. That’s not too bad, but the next step is annoying: You’ll need to enter your Amazon credentials, including the email address associated with your account and your password. Tapping out my email address and lengthy Amazon password on the Show 5 screen was a pain, in contrast to competing smart displays—I’m thinking of Google’s Nest Hub devices—that simply sign you in automatically.

Once you’re signed in, the Echo Show 5 steps you through picking a time zone, confirming your street address (for localization functionality), and selecting the room in your home where the display will sit. You’ll also be prompted to pick wallpaper for the screen, or you can choose either a folder from Amazon Photos, snapshots of a specific person, or a curated Daily Memories collection. It should be noted that if you do decide to turn the Echo Show 5 into a digital photo frame, it lacks the ability to display portrait photos side-by-side, as Google’s Nest Hub displays can; instead, they’ll be displayed with blurred backgrounds. Personally, I hate the way it looks, but that’s me.

Next, you can decide whether to allow other members of your household to view a live screen of the Echo Show’s camera (more on that in a little bit) and whether to enable Amazon’s Sidewalk neighborhood network (ditto). Finally, the display will also run a few free Prime trials by you before Alexa takes you on a brief tour.

I’ve already covered the controls and button along the top edge of the Echo Show 5, but I’m going to highlight a couple of them: the mic mute button and the camera shutter. When you press mic mute, the Echo Show will both disable the microphone as well as electrically shut off the camera, while three visual indicators—a red line at the bottom of the screen, a “mute” icon in the corner of the screen, and a red light on the mic mute button itself—will let you know that Alexa can’t see or hear you. The camera shutter, meanwhile, slides an actual and plainly visible shutter over the camera lens.

Besides the physical controls, you can also swipe on the Echo Show 5’s display. Swiping down from the top of the screen reveals a Home button, a brightness slider, a do not disturb toggle, and the Settings button. If you swipe in from the right side of the display, you’ll get a pane with buttons that let you access the Echo Show’s communication features (such as calling, announcements, and “drop-ins”), smart home controls, music, video, routines, and alarms.

The second-gen Echo Show 5 runs on the same quad-core, Arm-based MediaTek processor as the original, which isn’t great news. The first-gen Show 5 always felt sluggish when swiping the screen, with submenus often lagging for several seconds, and the situation hasn’t changed much on the new Show 5. If you’re anything like me, however, you’ll likely spend most of your time talking to Alexa rather than swiping and tapping the display, and Alexa on the Show 5 responds promptly when you give voice commands or ask questions.

Sluggish touch interface aside, the Echo Show 5 frequently flashes weather reports, news items, tips, sports scores, and other information on its display, complete with smooth and attractive transitions. If you’d rather skip the news or the sports, you can easily customize what will—and won’t—appear on the Echo Show 5’s screen.

If you already own the original Echo Show 5, there’s nothing new to learn about using Alexa on the updated display. As before, you can ask Alexa to give you a weather report, check your schedule, tee up music playlists, add items to a shopping list, and tell one of her famously corny jokes. And thanks to Alexa, the Echo Show 5 excels as a voice-controlled alarm clock, allowing you to ask Alexa to set one-time and recurring alarms, as well as wake-up alarms that gradually brighten the display.

You can also ask Alexa to control your smart home devices, and with support for more than 100,000 devices, Alexa easily outshines her competitors when it comes to taking charge of the smart home. As far as smart home routines are concerned, the second-gen Echo Show 5 does boast one innovation over its predecessor: a built-in proximity sensor, which allows you to create routines that could, for example, turn on your lights when someone enters the room where your Show 5 sits.

As with Echo speakers and larger Echo displays, both generations of the Echo Show 5 work with Alexa Guard, the feature that makes Alexa warn you if she hears suspicious noises like breaking glass or smoke alarms. There’s also the $5-a-month Alexa Guard Plus, which adds an emergency help line and the ability to detect dogs barking, sirens, and “activity” sounds.

Besides Amazon Guard, the Echo Show 5 can act as security cam—well, sort of. If you grant permission in the settings menu, you or anyone else in your household can view a live feed of the Echo Show 5’s built-in camera on another Echo display or via the Alexa app, meaning you can sneak a peek at the room it’s in when you’re away, provided the camera shutter isn’t closed or the mic-mute button isn’t engaged. (An on-screen overlay makes it clear that someone’s watching, and you can set an auditory alert as well.) Not bad, but the Echo Show 5 can’t match the functionality of the camera in the Google Nest Hub Max, which basically doubles as a Nest security camera, complete with motion-detection capabilities.

The Echo Show 5 also works with Sidewalk, Amazon’s ambitious (and controversial) shared network protocol that leverages nearby Echo and Ring devices to create a neighborhood-wide network. Click here to read more about Sidewalk, including how to turn it off.

You can use the Echo Show 5 to call other Echo speakers or displays in your house, as well as “drop in” on an Echo device to see and hear what’s going on in that room. (Don’t worry; Alexa will notify you if someone drops in on a nearby Echo.) You can also ask Alexa to make an announcement over all your Echo devices at once, handy for calling everyone to the dinner table. 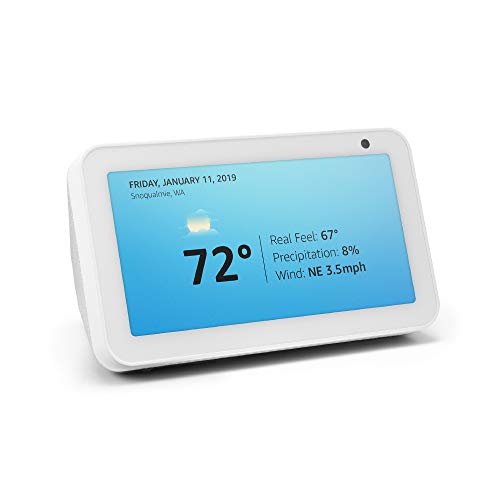 One nifty perk is that besides calling other Echo speakers, you can ask Alexa on the Echo Show 5 (or any other Echo device) to call any phone number in the United States, Canada, or Mexico for free, no cellular subscription required. Also, if you’re an AT&T user, you can connect your AT&T number to your Amazon account, which allows you to answer incoming calls on that number over any nearby Echo device, including the Echo Show 5.

As with the original Echo Show 5, the second-gen version has an integrated 1.65-inch speaker, and while its audio quality can’t match that of, say, a (far more expensive) Sonos speaker, it’s more than adequate for listening to tunes on Spotify; indeed, my wife and I have a routine set up on our bedroom Show 5 that includes a nightly Spotify sleep timer. You can also add the Echo Show 5 to any Alexa speaker groups you’ve created for your home.

You can also watch on-demand and live TV on the Echo Show 5, although it goes without saying that the five-inch, 480p display isn’t exactly ideal for watching movies or big-budget streaming shows. Netflix is a recent addition to Echo displays, and you can also watch videos on Amazon Prime Video (natch), Hulu, Showtime, DirecTV, Dish Network, and particularly Food Network Kitchen (perfect for cooking lessons in the kitchen). YouTube remains a glaring omission, however, and we’re still waiting for Echo devices to support such popular streaming services as Disney+, HBO Max, Paramount+, and Peacock.

We’ve already established that there’s not much point in upgrading to the second-gen Echo Show 5 if you already have the first-gen version. But what if you’re a first-time buyer—is the new Echo Show 5 worth your money?

Well, here’s the thing: There’s no question in my mind that the second-gen Echo Show 5 is a top-notch, reasonably priced smart display, and I heartily recommend it. But if you find a killer deal for the older Echo Show 5 (it was going for just $45 during Prime Day), snag it. It has virtually the same display, minus the sharper camera and the proximity sensor, but the old model has a 3.5mm audio jack that the newer model lacks)

If you must have the latest and greatest, the second-gen Echo Show 5 still makes for a great value, even at full price.