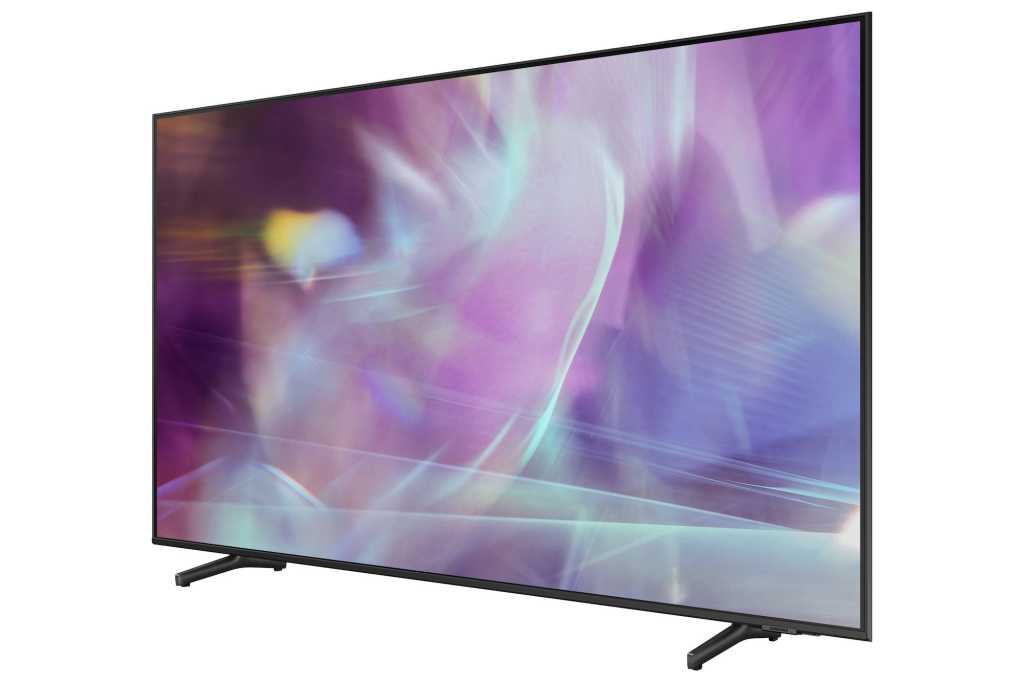 This TV actually deserves another quarter star, as it delivers a better picture than most lower-mid-range TVs. Quantum dots make for accurate color, and there’s plenty of brightness

There’s nothing like working on a few entry-level TV reviews to renew my admiration for Samsung’s QLED image quality. Even the first-rung Q60A QLED reviewed here is a breath of fresh air by comparison. Being edge-lit, the Q60A doesn’t deliver the same contrast or black levels as the company’s pricier array-lit and mini-LED QLEDs, but it’s still a large step up in terms of color and bright detail.

The basic display technology inside the Q60A is only marginally changed from my last look at the series, 2019’s Q60R. The $850, 55-inch class unit reviewed here features the same basic 10-bit, 60Hz, 4K UHD (3840 x 2160) panel, though this one sports the company’s dual-LED technology introduced with last year’s T-series, for a slightly warmer color palette.

As mentioned, edge lighting is employed, which means no local zone dimming. Color is enhanced with quantum dots (It’s a QLED), and there’s a decent amount of usable peak brightness at around 450 nits. The test unit weighed in at around 38 pounds, and new for this year, features height adjustable legs that don’t require screws—a boon for quick and easy setup. The VESA mount point is 200 x 200mm.

The port array is sufficient for most modern households, but you’ll need an HDMI adapter for legacy composite/component/audio gear. On board are three HDMI inputs (one supporting eARC), two USB ports that support both mass media for playback and peripherals, a coax jack for cable and antenna use, optical SP/DIF, and ethernet.

Samsung supports HDR10 and HDR10+, as well as HLG high dynamic range video, though not Dolby Vision. Dolby Digital Plus audio is supported, though not Atmos. Support for that object-based spatial surround sound codec starts with the Q70A. There’s a low-latency gaming mode, and wide aspect ratio gaming is also possible via Super Ultrawide GameView. I normally avoid vendor-speak, but that one made me chuckle.

Alexa, Google Assistant, and Samsung’s own Bixby digital assistants are supported, and the company provides its own curated content in the form of Samsung TV Plus. Also on board are unique Samsung features, such as ambient mode, where the screen mimics your wall via a photo you upload, and the SmartThings IoT environment.

Samsung’s SmartHub interface is clean, attractive and generally easy to navigate; however, it’s very inefficient—requiring far more clicks than any of the competition (Android TV, Roku, Vizio, WebOS) to get where you need to go. It also tends to forget things, such as the home row shortcut for the NAS box I stream movies from. On the other hand, all the big streaming services are available, and there’s a decent channel guide for cable, over-the-air, and Samsung-curated content.

All the right user-interface elements are present, including the most popular streaming services, channel guide, and so on—it’s just not up to a Roku or Vizio level of sophistication when it comes to finding it.

From an industrial design perspective, Samsung’s remotes are easily the most attractive on the market, and I love the volume and channel select rocker buttons. This latest TM2180E version forgoes disposable batteries for an internal Lithium Ion battery that is charged via the small solar panel on the unit’s backplate. Just remember to set the remote facedown as often as possible, or alternatively, use the Type-C charging port on the bottom.

All that remains is for Samsung to make the melding of interface and remote less click-hungry. I’d be happy to sit down with them to discuss, though examining the competition should tell the company everything they need to know.

The Q60A’s image quality is vintage Samsung; meaning it’s as good as it gets for the technology involved. There’s enough usable brightness for HDR, details are excellent, color is spot on (and a bit warmer than the previous generation, thanks to the previously discussed Dual-LED lighting), and contrast and blacks are… as good as you can expect without direct backlighting or zone dimming. Better backlighting graces QLEDs starting with the next step up—the Q70A.

Processing is very good. There’s effective motion compensation (for 60Hz), minimal shimmer and moiré, and in general it’s just a very good picture. Note that with a lot of material, I’ve found that reducing the brightness on Samsung TVs makes for a better overall picture, and eliminates that “shot to video” effect that occurs with some material.

Good for the money

Samsung’s QLED image quality has spawned legions of fans, and the Q60A shows you why. It’s arguably best in class, even with edge-lighting. That said, the extra clicks required by Samsung’s remote and interface have worn me down to the point where I’ll accept a slightly lower-quality picture in the name of ease of use; namely, Roku.

If you’re a QLED fan, I can’t help thinking you might want to step up to the Q70A where you’ll get the brightness and much better contrast. At the Q60A’s price point, compare it to the Hisense U8G, Sony’s X900H, and the TCL 6-Series.