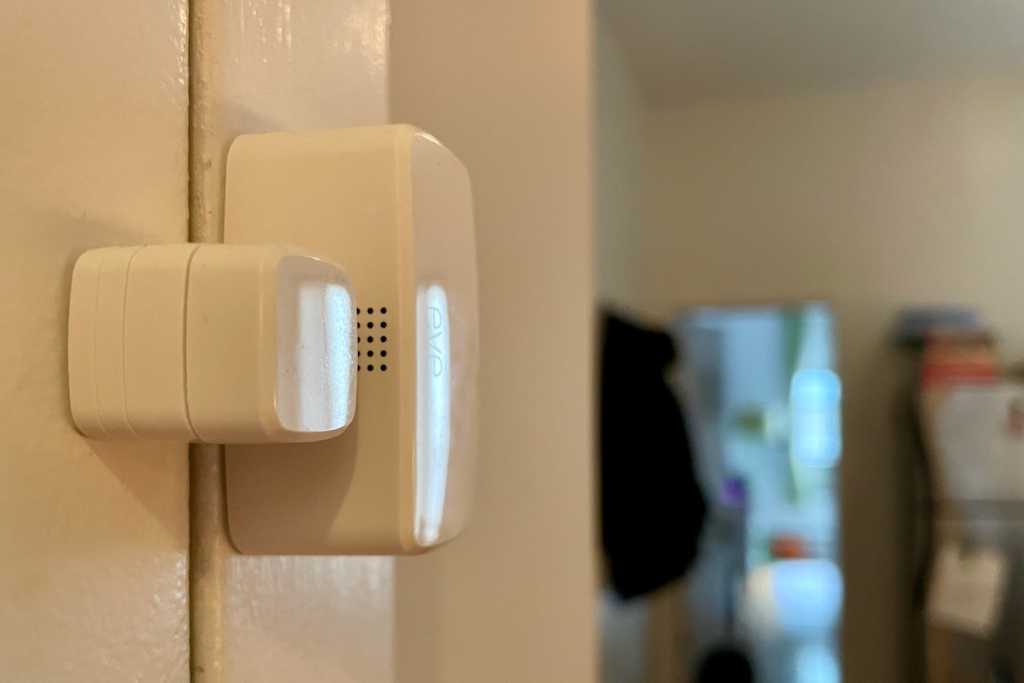 Eve Systems has been adding more and more Thread-enabled smart gadgets to its portfolio, including the Eve Aqua sprinkler controller (which we’ve previously reviewed) and the Eve Energy smart plug (ditto). Eve Door & Window is another example, a HomeKit- contact sensor that became Thread-enabled in 2021 thanks to a firmware update. As easy to set up and use as Eve’s Aqua and Energy products. Eve Door & Window supports powerful automations (with able assistance from the Eve app) and lets you take a deep dive into when, and how often, your doors and windows have been opened and closed.

At $40, however, Eve Door & Window is mighty expensive for a contact sensor, and while it does support HomeKit, it doesn’t work with Alexa or Google Assistant, which means only Apple users need apply. You can also configure it to trigger lighting scenes when you arrive home, or to turn down the thermostat when someone opens the window, so it’s geared more toward home automation than home security; for the latter, you’re on your own in terms of integrating the sensor with a third-party security system. Eve doesn’t offer one of its own, and the only HomeKit-compatible security systems we know of are from Abode (note that we did not test the Eve Door & Window with either the original Abode home security system or the Abode Iota).

This review was originally published in June 2021, but we’re updating it with our subsequent observations about battery life (which are more or less in line with Eve’s initial estimates) as well as developments with Thread and Matter, an upcoming (and potentially unifying) smart home standard that uses Thread as a pillar.

Eve Door & Window consists of two components: a larger (2.1 x 1.0 x 0.9 inches) sensor module (or reed switch) and a smaller (0.7 x 0.7 x 0.3 inches) piece that contains a magnet. Each component comes with a peel-and-stick backing, and little dots on each piece show you where they need to line up.

The Eve Door & Window sensor module is powered by a half-AA (ER14250 3.6V) battery, which is included in the box. The battery that came with our review unit ended up lasting about 11 months; that’s a tad shy of Eve’s estimate of a year, but it’s close enough.

Eve Door & Window comes equipped with both Bluetooth connectivity as well as support for Thread, the low-power, low-latency wireless protocol that we’re starting to see on more and more smart devices, including several other recent Eve products and Nanoleaf’s Essentials, Shapes, and Elements lines.

The battery-powered Eve Door & Window acts as a Thread endpoint (as does the Eve Aqua, which also runs on a battery), while the plugged-in Eve Energy and Nanoleaf’s Thread-enabled lights are Thread routers, which can extend Thread networks by connecting multiple Thread devices together.

For the Eve Door & Window to connect to the internet via Thread, it needs a Thread border router, such as an Apple HomePod mini or the second-gen Apple TV 4K; Nanoleaf’s Shapes and Elements light panels also come with Thread border routers, but they won’t work with HomeKit devices until a promised firmware update arrives.

While the use of a Thread border router is one way to access Eve Door & Window when you’re away from home, it isn’t the only way. The sensor can also connect to a HomeKit “home hub” device such as an Apple TV (HD or better) or a HomePod speaker via Bluetooth; with that connection established, you’ll be able to see Eve Door & Window’s status even when you and your iPhone are out of Bluetooth range.

While Eve Door & Window are compatible with HomeKit and Thread, it doesn’t work with Alexa or Google Assistant. That means the sensor is pretty much only for Apple users.

Now, it’s possible that Matter, a promising smart home standard that promises to unite the Alexa, Google Assistant, and HomeKit ecosystems, could change that situation, given that Thread is a pillar of Matter. But Matter has already been delayed once, with the software development kit for the standard now due sometime in 2022 (fingers crossed).

Getting Eve Door & Window up and running is as easy as advertised. Both the sensor module and the smaller magnet component have peel-and-stick backings, so all you need to do (after installing the half-AA battery into the sensor) is attach one piece on the door or window and the other on the trim, so that the matching square of dots on each piece line up with each other.

Now, you may notice that the magnetic piece of the Eve Door & Window kit is roughly ⅔-inch shorter than the sensor component when they’re both sitting on the same flat surface. That’ll work just fine if, say, your door frame protrudes from your wall; if your door and door frame are flush, however, the dots on the sensor and magnet pieces won’t line up. In that case, you’ll need to attach the included plastic risers to the magnet module. Four risers are provided, and you just snap on as many as you need to make the sensor and the magnet line up properly.

I managed to install Eve Door & Window on my front door in about 15 minutes, using all four of the risers since the door and its frame are flush. Two months later, the sensor still feels secure in my door, even after a total of (I’m consulting the Eve app here) 432 door opens.

Once you have the two Eve Door & Window pieces installed, you can add the accessory to HomeKit by scanning the QR code on the sensor module with your iPhone’s camera; doing so will jump you directly to the Apple Home app, where you can group the sensor with other HomeKit devices in a given room. In my case, I added the sensor to the kitchen.

The Eve Door & Window sensor will pop up in the Eve app as soon as you add it in Home. The beauty of the Eve app is that you don’t need to create a seperate Eve account to use it; instead, all your HomeKit devices simply appear there, and you can immediately begin organizing and automating them as you see fit. Eve Systems emphasizes that Eve Door & Window (as well as its other recent HomeKit products) connect to your home hub devices via end-to-end encryption, without ever contacting any other third-party services.

On the most basic level, you can set Eve Door & Window to trigger HomeKit notifications whenever your door or window opens or closes.

Using the Home app, you can decide whether you’ll get the alerts all the time, only during the day, only at night, or at specific times. You can also choose only to get notifications when someone is home, when you’re home, when you’re away, or when nobody’s home.

While the Home app only tells the current status of the sensor, the Eve app can give you as much detail about the sensor’s contact history as you can stand.

For example, it can tell you how many total times a given door or window has been open, complete with a chart breaking down the data on an hourly, daily, weekly, or monthly basis. There’s also a log (which you can export to an Excel doc) that details the exact times your door or window was opened, and for how long. Finally, the app prominently lists the last time the door/window was opened.

Besides monitoring the status of Eve Door & Window, the Eve app also lets you add the sensor to a wide variety of automations. For example, the sensor could trigger a lighting scene and tee up your favorite music playlist when you walk in the door, and you could set the automation so it would only run, say, on weekday evenings, right around when you typically get home from work. Another option would be to make the sensor dial down your air conditioning or heating when a window is opened, or to change the color of a light to warn you that the sensor had been tripped. Each automation allows you to add one or more triggers, conditions, and resulting scenes.

While Eve Door & Window could be integrated into a home security setup, Eve Systems doesn’t offer one of its own; instead, the manufacturer positions the sensor more as an all-purpose tool for home automation. If you’re more focused on security and/or professional home monitoring, you’ll need to integrate Eve Door & Window into a third-party HomeKit-compatible smart security kit. If you’d rather keep things simple. you might be better off with door and window sensors bundled with a smart home security kit, such as Ring Alarm (our current TechHive Editors’ Choice for smart home security systems).

What it does, Eve Door & Window does well. It was a snap to set up, it plays nice with HomeKit, and it’s easy to create automations that can do anything from set lighting scenes and tee up your tunes when you arrive home to adjust your HVAC system if someone opens a window. But $40 is pretty steep for a single contact sensor, and until Matter gets off the ground, Eve Door & Window is only good for Apple users.

Updated March 11, 2022 with more details on battery life as well as subsequent developments with Thread and Matter.