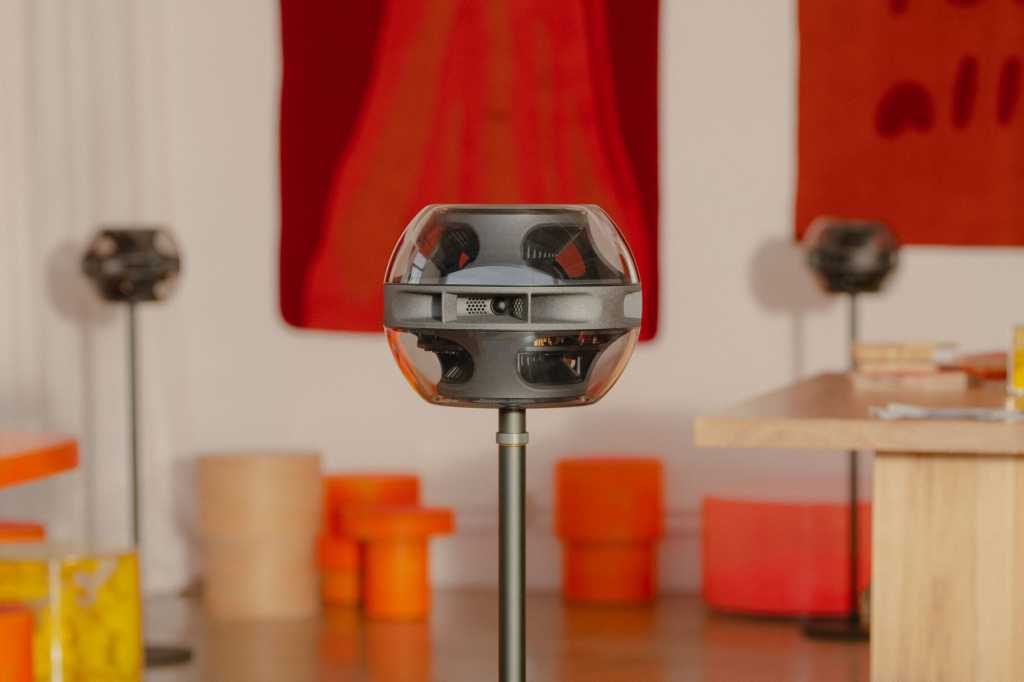 When I first heard about a new immersive speaker from a company called Syng, I was intrigued. Dubbed the Cell Alpha, its form factor was unlike any speaker I had seen. That design was spearheaded by Christopher Stringer, who had previously worked on many iconic Apple products for more than two decades.

Aside from its striking appearance, the big question is, how does it sound? When the company invited me to visit its offices in Venice, California, to hear it for myself, I jumped at the chance. It was my first in-person demo since the Coronavirus pandemic began, and I was super happy to get out of the house! Also, I was the company’s first visiting journalist since early last year, so we were all excited about normalcy returning.

Measuring 12 inches in height, 11.8 inches in diameter, and weighing a hefty 12.8 pounds, the Sync Cell Alpha employs a clear-plastic, sealed, dual-truncated spheroidal enclosure that reveals the innards of this innovative speaker. Perhaps most apparent are two force-cancelling, 6.5-inch woofers with flat, carbon-fiber composite diaphragms. The downfiring woofer has a hole in the center to accommodate a pole stand, and a second surround allows the diaphragm to vibrate freely along the pole.

Arrayed around the equator of the spheroid are three coaxial drivers, each with a 3-inch inverted-dome midrange and a 0.75-inch silk-dome tweeter. Each coaxial driver is mounted in a specially designed horn and placed at an angle of 120 degrees from each other in a structure called a Triphone. The overall frequency response is specified to extend all the way from 30Hz to 20kHz (±3 dB).

Rounding out the basic internal components is a set of Class D power amplifiers, one for each driver. Syng does not specify the power output of these amps; according to the company, “In a powered speaker, the amplifier and drivers have been co-designed for optimum efficiency. It is only meaningful to list the power of the amp or the power rating of the speakers when speaking of standalone amplifiers and speaker drivers.”

In addition, sophisticated DSP supports a key feature called Triphonic Audio. Syng describes this feature as an object-based sonic architecture that offers full control with precise placement and localization. According to Syng, “You can put sound wherever you want, shrink it, move it, magnify it, and layer it. Or let the Cell handle everything—with Triphonic audio, it’s able to virtualize any speaker array and accurately spatialize sound for your room.”

As the company further explains, “The Cell optimizes the sound in the room by figuring out acoustical problems. It detects the exact location of nearby walls and room corners and uses that information to rotate the soundfield toward the center of the room. In a multi-Cell system, each Cell detects the distance and angle of the other Cells in the system to optimize the Triphonic rendering,” which includes adjusting the levels, delays, and soundfield orientation. In addition, it uses equalization to compensate for low-frequency room modes.

All of this is made possible with three beamforming microphones that provide the data required for the DSP to perform automatic room equalization, wall proximity and direction detection, and multi-Cell geometry calculation. The Triphone drivers then utilize their own beamforming to adjust the soundfield.

The system is controlled from the Syng Space app, which is currently available only for iOS but expected for Android this summer. The app lets you set up the speaker and control the soundfield’s shape and size as well as other playback parameters.

Connection is primarily wireless using simultaneous dual-band 2.4/5GHz Wi-Fi 5 (802.11ac) with support for AirPlay 2 and Spotify Connect. Chromecast and other wireless connections can be added via over-the-air updates, but no schedule for those additions has been announced. There is no Bluetooth audio, though Bluetooth LE is used for setup, discovery, and tracking of Cells. The speaker also has two USB-C audio inputs as well as an HDMI eARC port to be used with a proprietary Syng Link cable that will be available in the fall.

Two pole stands are available: a tabletop stand measuring about 17 inches tall and a floor stand with an adjustable height from 36 to 48 inches. Both stands have a control ring near the top that provides volume and play/pause control.

For the demo, there were three Syng Cell Alphas set up in a relatively small room: two on a shelf in the front corners on table stands and one on a floor stand in the center of the back wall. Also on the shelf in the front of the room was a Devialet Phantom I ($3,200), Bang & Olufsen Beosound 2 ($2,250), and Sonos Play:5 ($499).

The demo was conducted by Chris Kyriakakis, Syng’s chief audio scientist, and Nathan Hoyt, senior acoustic engineer. They played tracks from Spotify on a Macintosh, which switched the signal to each speaker. To keep switching times reasonable and avoid having to wait for wireless handshakes, they used a USB connection to the Cell Alpha; the other speakers also used a hardwire connection from an outboard audio interface: S/PDIF to the Devialet and analog audio to the B&O and Sonos.

As they played several stereo tracks while switching between a single Cell Alpha in one corner and the other speakers, it was immediately apparent that the Cell had the lowest, loudest bass and the widest soundfield. All three of the other speakers had a much smaller soundfield and less bass. In particular, the Devialet sounded somewhat closed in, while the B&O had the least bass of them all, resulting in a very trebly sound.

I found the Cell Alpha’s bass to be a bit overbalanced, which I thought might be due to the fact that it was in a corner. When I mentioned it to Chris, he said the calibration process takes that into account and produces a perceptually flat response in relation to the human response to loudness, which is less sensitive to low and high frequencies than it is to the midrange.

He suggested that my observation might be due to the direct and immediate comparison with the lower level of bass output from the other speakers. Of course, he’s a representative of the company, so his comments must be considered in that context, but he also has deep technical chops that I greatly respect; after all, in his previous gig, he was one of the driving forces behind Audyssey room correction.

Next, they played some stereo tracks on all three Cells in the room. As Chris explained, the Syng system accepts a stereo signal and creates “spatial elements” that he called “leftish,” “rightish,” “centerish,” and “ambient surroundish.” Those elements are then rendered by however many Cell speakers are in the system, with all speakers reproducing all four elements in different amounts, depending on where each one is in the room. Syng calls this Beyond Stereo, which is made possible by the company’s Triphonic beamforming technology.

As I walked around the room, I could definitely hear roughly the same mix from any location, unlike a traditional surround system. Nathan showed me the Syng Space app, which was set for the widest possible soundfield—in other words, a huge sweet spot centered in the middle of the room. He then adjusted the size and location of the soundfield to demonstrate that you could move the sound so it’s fully rendered in part of the room and less so in another part, allowing comfortable conversation there. This is accomplished by graphically by dragging a “puck” around on the screen and pinching to change the size of the soundfield.

In addition to 2-channel audio, the Syng Cell alpha can accept a 5.1 signal via ARC and eARC using a special Syng Link HDMI cable, which is scheduled to be available in the Fall. Like an ARC soundbar, you would use the TV as a switcher in this case. (You can read all about the differences between ARC and eARC in this linked article.)

Chris and Nathan also showed me some things they are working on for the future, which are mighty cool. But if I told you about them, I’d have to kill you—or, more to the point, they’d have to kill me!

The Syng Cell Alpha is available now; you can buy it at the company’s website. Be forewarned—it ain’t cheap. A single Cell Alpha with the tabletop stand will set you back $1,799; add the height-adjustable floor stand and the price goes up to $1,969.

I was quite impressed with what I heard at the Syng offices; the overall sound quality was excellent, and the immersive soundfield was better than I’ve heard from other speakers of this type. Of course, any company demo must be taken with a grain of salt; I intend to review the Syng Cell Alpha in my home as soon as they ship me one—or better yet, two or three! So, stay tuned for that.

Updated shortly after publication to report that the Syng Cell Alpha is available for purchase now.