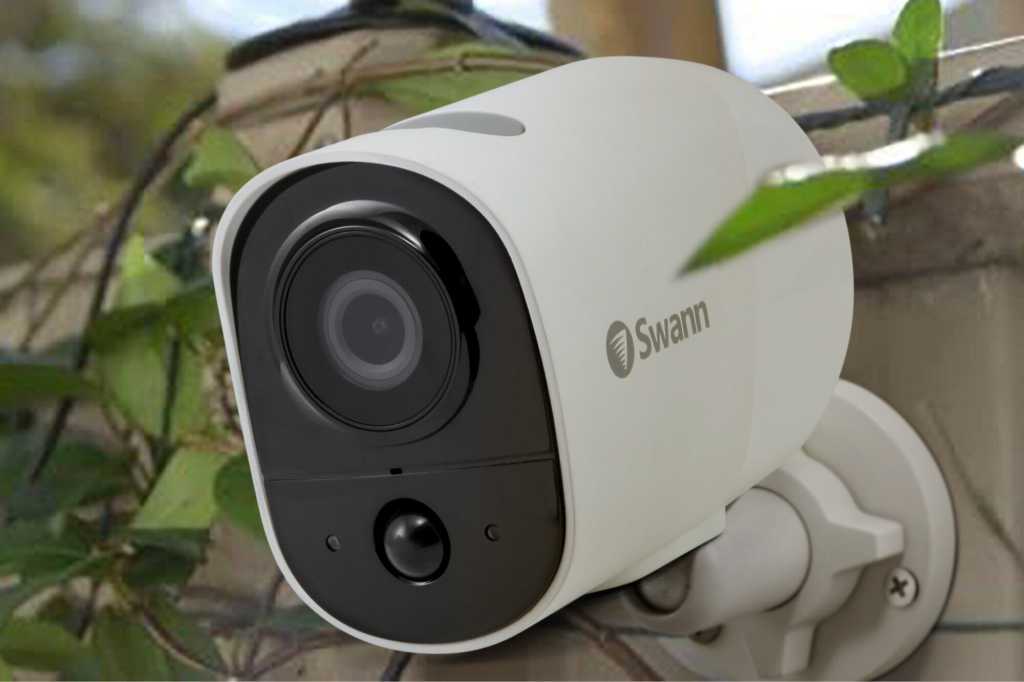 Swann is best known for its professional, wired security systems, but lately it’s been muscling its way into more consumer-friendly categories, like this straightforward offering. Of late, Swann has continued to move upmarket, and its latest home security camera, the Xtreem wireless, is designed to compete with some of the higher-end home systems available, such as Arlo.

The hardware is compact and substantial (at 12 ounces, sans base), an all-white device that’s weatherized for outdoor use. The small base can be attached to the wall via included screws; the camera snaps securely into place magnetically and allows for easy positioning. As the name implies, the camera is completely wireless. A 13,200mAh battery recharges via a microUSB port (concealed beneath a rubber flap) and is said to be good for up to six months of moderate use.

Tech specs include all the usual suspects and more, including 1080p video with a 110-degree field of view, heat and motion sensing, standard night vision and color night vision courtesy of a small LED spotlight, two-way audio, internal storage on an included microSD card (16GB is included per the specs, but my unit had a 32GB card installed), and one day of cloud-based backup included free of charge. You can stretch the cloud backup to 60 days by paying $5/month or $50/year. Connectivity is via 2.4GHz Wi-Fi only, and you can also stream Swann’s video to compatible Alexa or Google devices.

Setup is a straightforward affair, for the most part: Download the Swann Security app, create an account, and scan a QR code printed on the underside of the camera. The app does most of the heavy lifting from there, although the creepy audio commentary provided by the camera’s speaker is perhaps unnecessary. Everything went fine with setup until the very end, when the app was attempting to link the camera to my account. Time after time, this linkage failed, leaving me with a camera that appeared to be working, but whose recordings I was unable to access.

I ended up spending two full days of resets, do-overs, and firmware upgrades before the camera finally linked to my account successfully. Fortunately, I didn’t have any significant trouble accessing the camera feed after that point.

The Xtreem’s 1080p video is clear and vibrant, even on its lowest quality setting, though the 60-second clip limit is restrictive. (Making matters worse, nearly all the clips I recorded cut off after much less time than that, even when motion hadn’t stopped.) I also had to punch up the motion sensitivity to maximum in order to get much use out of it; otherwise, I found the camera missed quite a bit of the action, and even then detection was erratic.

The system does push a notification to your phone when it detects motion, but several times in my testing I stood in front of the camera, waving my arms, only for nothing to happen. The night vision feature—which is automatic after hours—offers solid clarity (though at a range of just 26 feet max), but I found video playback to be frequently jerky and halting.

The Xtreem has a number of settings and advanced features, but you’ll need to dig into the electronic manual to understand them all, as the included printed manual is of minimal value. Various sensitivity settings can be tweaked, such as the “sleep period” during which the camera rests after it records a motion detection event. As well, you can adjust the length of the optional internal siren, should you want the quietest, least threatening alarm ever to erupt whenever someone walks by. Not everything in the interface is completely intuitive, though. For example, you’ll find recordings collected by the motion sensor under the “Playback” tab, but recordings you manually create in a separate part of the app, under “Recordings.”

My biggest complaint with the Xtreem however is how ploddingly slow it tends to be. From launching the app to viewing the camera live takes about 30 seconds, and lengthy delays are common for everything from playing back recordings to accessing the settings menu. In case of an emergency, these kinds of delays can be particularly problematic. The rest of the time, it just makes for a frustrating user experience.

The Swann Xtreem performs well as a camera, but it stutters as a security product. But with more attention to responsiveness and usability, things could clearly be improved down the road.